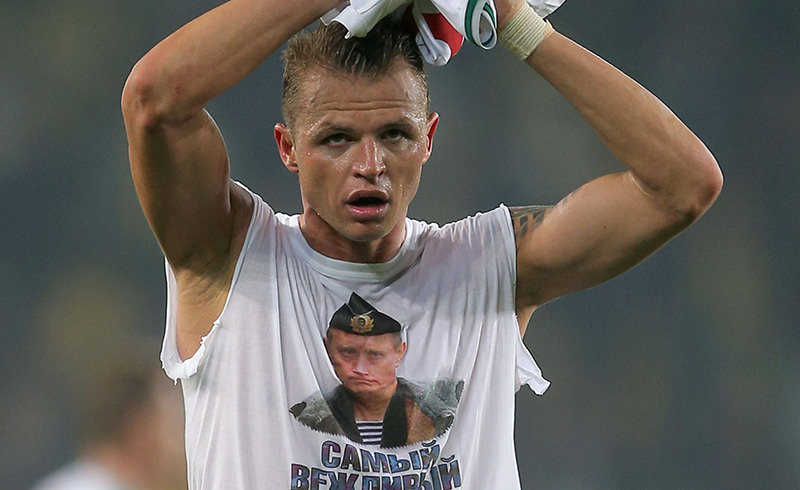 Lokomotiv Moscow's Dmitri Tarasov wears a shirt showing Russian President Vladimir Putin that reads 'Most polite president' (AFP Photo)
by Feb 19, 2016 12:00 am
Lokomotiv Moscow have given midfielder Dmitri Tarasov a heavy fine because of a political statement made in support of Russian President Vladimir Putin at a Europa League match against Fenerbahçe in Istanbul, a report said late Thursday.

Amid tensions between Turkey and Russia over their involvement in the conflict in Syria, Tarasov removed his jersey after the final whistle at Tuesday's match to reveal a T-shirt showing a portrait of Putin and the words "the most polite president."

"Lokomotiv is so disappointed with the situation in Istanbul that they have gone to an extreme and imposed a practically record-high sanction," an inside source told Russian state news outlet R-Sport.

"300,000 euros (333,000 dollars) will be set aside from Tarasov's salary as well as bonuses that he could receive for February," the source was quoted as saying.

Lokomotiv, who lost the match 2-0, denounced the incident as "inadmissible" as UEFA does not tolerate political demonstrations, "even those carrying positive messages."

"Unfortunately, the club's staff could not prevent this incident from happening," Lokomotiv said in a statement on its website. "Dmitri's own initiative has proven inappropriate and harmful for the club as well as for himself."

UEFA has also opened disciplinary proceedings against the player, who is suspended from the return leg between the clubs next week having collected too many yellow cards.
Last Update: Feb 19, 2016 1:18 pm
RELATED TOPICS