Beşiktaş back at top after 35 days 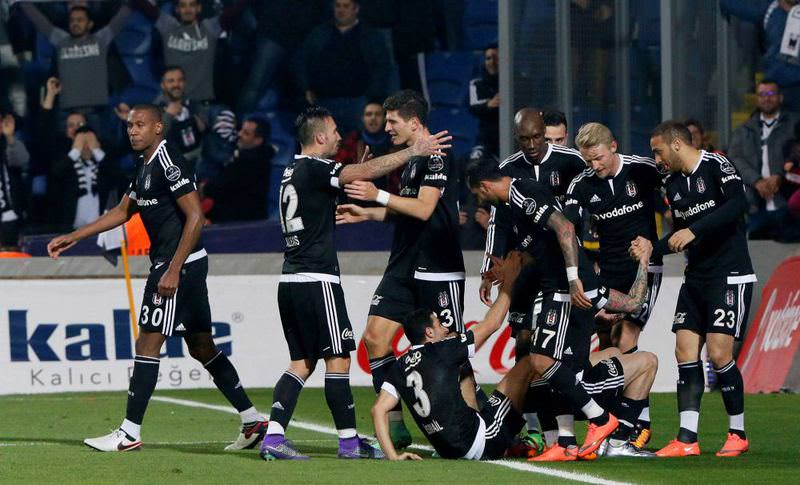 A second-half goal from top scorer Mario Gomez was enough to secure the points over Genu00e7lerbirliu011fi.
by Daily Sabah Feb 24, 2016 12:00 am

The Eagles, who had two matches postponed due to the weather conditions during winter, reclaimed their top spot in the Super League after a 1-0 victory over Gençlerbirliği

The competition between Beşiktaş and Fenerbahçe is heating up ahead of the derby match between two powerhouses next Monday as the Black Eagles retook their place at the top of the Super League. A second-half goal from top scorer Mario Gomez was enough to secure the points over Gençlerbirliği at the Başakşehir Fatih Terim Stadium in Istanbul.

The game saw several efforts from Beşiktaş's Portuguese winger Ricardo Quaresma saved in the first 45 minutes and Olcay Şahan's 17th minute header was the best chance of the half but was kept out by the woodwork. Gomez capitalized on Beşiktaş's dominance midway through the second half, demonstrating the reason for his call up to Germany's European Championship squad. Gençlerbirliği nearly drew level in the 73rd minute when Uğur Çiftçi hit the post. Gomez now has 16 goals league goals from 68 attempts this season since joining from Fiorentina over the summer – 18 in all competitions.

In the winter, the Eagles were unable to play two of their matches because of the weather conditions and in this brief period their main rivals Fenerbahçe captured the league's top spot. However Beşiktaş won one of the postponed matches against Mersin İdmanyurdu with a 1-0 victory and Fenerbahçe lost five points after one loss and a draw. Although they have one game in hand still, Beşiktaş they have already taken over the top spot from Fenerbahçe. The Black Eagles will play against Trabzonspor on March 15.

So, next Monday will see the top two face each other at Fenerbahçe's Ülker Stadium in what could be one of the most important games in the title race.

The black and white side now lead the table with 51 points - a point above local rivals Fenerbahçe and with a game in hand. Third-placed Galatasaray trail on 37 points.

Visitors Trabzonspor took the lead in the first half as Swedish winger Erkan Zengin scored from a penalty kick in the 25th minute.

In the 59th minute, Trabzonspor midfielder Özer Hurmacı was sent off after a sliding tackle against the Lions' left back Lionel Carole.

Dominant through much of the game, Galatasaray equalized in the 63rd minute through their German star Lukas Podolski. The 30-year-old forward smashed the ball into the net after trapping it in the area.

In the 70th minute, Trabzonspor center back Aykut Demir was brandished his second yellow card by the referee after he argued with Podolski. Retaining possession of the ball more after the Trabzonspor players' exit, Galatasaray pressed more to score the winning goal.

The Lions were awarded a penalty near the end of the game as Umut Bulut was brought down by Trabzonspor defender Cavanda. Turkish midfielder Selçuk İnan converted the penalty successfully in the 89th minute, winning a crucial lead for his team in the clutch.

Achieving a comeback in the nick of time, the Istanbul club won the match 2-1 and ended their three-match poor run in the league. Galatasaray climbed to the third spot with 37 points, while Trabzonspor are in the ninth position with 27.

After the penalty decision, Trabzonspor defenders Cavanda and Salih Dursun were both shown red cards. In the heat of the moment, Turkish right-back Dursun took the referee's red card and brandished the red card at him to protest his decisions, and was sent off as a result.

Footballer red-carding referee has no regrets

The Trabzonspor footballer Salih Dursun's act has given him entry in the history books of Turkish football and the incident has since gone viral around the world. He talked Tuesday, saying, "I have no aim to be a hero. I am already known. I don't know what kind of punishment I will get but I don't need to defend myself. Everything happened in the eyes of the public."

"We have already suffered a lot because of the ill-performing referees. I believe everybody remembers what has happened since the start of the season. Sometimes it pushes the limits of our patience. Those who are close to me are asking whether I planned the incident before. It is not possible because everything happened spontaneously. I did my own thing. "It is not what I want to be known as, a hero. I am very young and have aspirations. I am already a hero for the fans whose teams I play for. I wish I had not experienced such an incident. "After the match the echoes in the social media surprised me. I did not imagine this would end up like this. I'm sorry I was sent off. Our president and administrators wanted me to relax. They honored us with their attitude after the match."
RELATED TOPICS