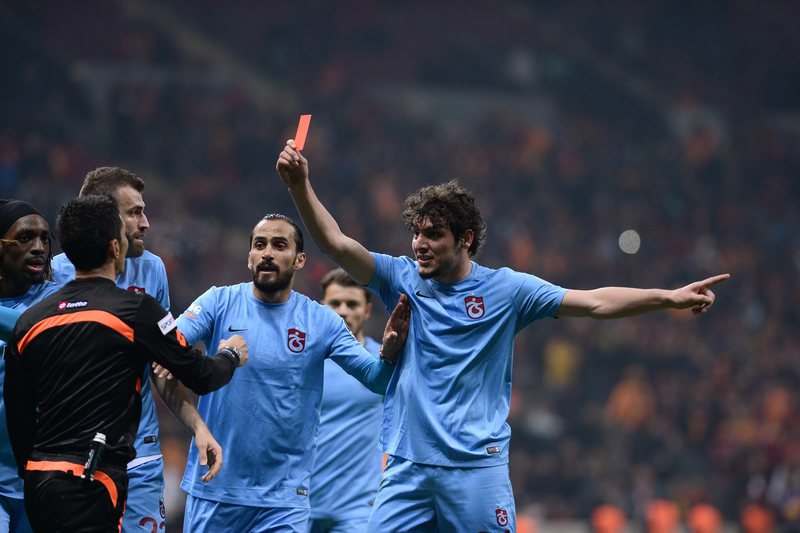 by Daily Sabah with AFP Feb 25, 2016 12:00 am
Trabzonspor defender Salih Dursun who brandished a red card at the referee at the weekend's ill-tempered clash with Super Lig rivals Galatasaray was hit with a three match ban by the Turkish football federation on Thursday.

As well as the the three match ban, Dursun was handed a 13,000 lira ($4,440) fine for violating the rights of the referee, the federation said in a statement.

The Black Sea side had already had two players sent off by referee Deniz Ateş Bitnel in Sunday's game when Belgian defender Luis Cavanda was deemed to have brought down Umut Bulut in the penalty box in the 86th minute and was himself dismissed.

Trabzonspor players remonstrated with the referee and in the fracas Dursun pinched the referee's red card and brandished it in front of Bitnel.

He was duly sent off and Galatasarsay won the game with the ensuing penalty.

Commentators were bitterly critical of the referee's performance and said Dursun had shown the red card to Turkish football in general which has been shadowed by low attendances since a 2011 match-fixing scandal and the failure of Turkish clubs to make any impact in the Champions League.

Far from sanctioning Dursun, Trabzonspor announced the club started printing T-shirts showing Dursun make the already iconic gesture for sale in the official shop. The team was given a hero's welcome by fans when they flew back to Trabzon after the away clash in Istanbul.

Salih Dursun received support from other clubs. Bursaspor tweeted, "He is our child too. He is not only a symbol of Trabzonspor but also ours." Also a street in Yomra, Trabzonspor's district, will be named after Salih Dursun.

Cavanda was given a two match ban for his role in the incident while defender Aykut Demir was also given a three match ban for threatening the referee.

Turkish football officials have expressed displeasure with the performance of the referee in the game, which ended with just seven Trabzonspor players on the field.

This is not the first time that Trabzonspor have gotten into trouble over a referee. The club's chairman, İbrahim Hacıosmanoğlu, was handed a 280-day ban in November after locking four match officials in the stadium overnight for failing to award his team a penalty.
Last Update: Feb 25, 2016 7:52 pm
RELATED TOPICS