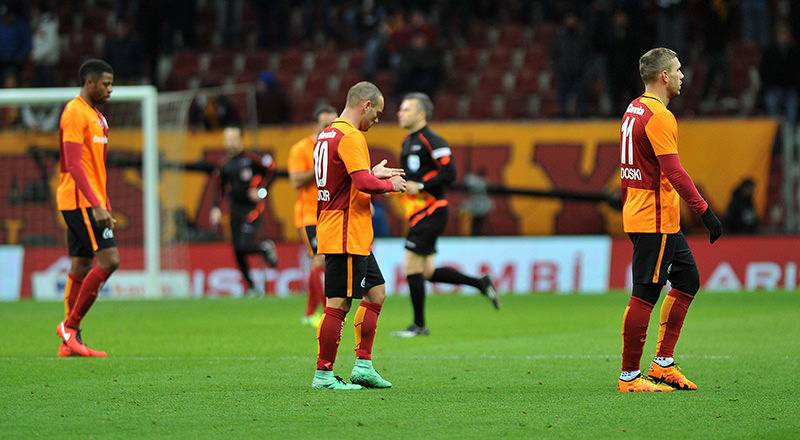 Adding extra troubles to a nightmare season, the top body of European football banned the Istanbul club from its organizations for a year for failing to meet its financial fair play criteria

The UEFA Club Financial Control Body (CFCB) adjudicatory chamber on Wednesday banned the Turkish football club Galatasaray from European football competitions for one year after ruling the team failed to meet terms of the agreements put forward in a deal reached with the top body of European football to meet its financial fair play criteria last year.

The ban will be effective for two seasons if Galatasaray qualifies for European cups during 2016 / 2017 and 2017 / 2018 seasons. However, the ban will drop if the team fails to qualify in these seasons.

However, the Istanbul club managed to dodge the expected extra one year ban through a successful defense in front of the chamber.

Nevertheless, the ban means an important loss of income and prestige for last year's champions of both Turkey's Super League and national cup.

This season has already proven to be a nightmare for Galatasaray, who currently stands at the fifth place at the Super League with 16 points behind the leaders, and their arch-rival, Fenerbahçe.

With the leave of veteran coach Mustafa Denizli on Tuesday, the club currently seeks its third manager to run the team for the 2015 / 2016 season. Only managing to coach the team for three months, Denizli had replaced Hamza Hamzaoğlu, who managed to win three titles with the club in 2014 / 2016.

Hamzaoğlu himself was also brought to duty in December 2014, after Italian coach Cesare Prandelli, who took over from his compatriot Roberto Mancini's six months long term, was fired after poor results in Europe.

The main reason behind Galatasaray's poor financial situation is often cited as expensive transfers made during the terms of this changing managers.

The hit transfers made during this period included global stars like Didier Drogba, Wesley Sneijder, Emmanuel Eboue and Lukas Podolski, in addition to various local players.

However, the club failed to meet the expected success level in European cups, which would contribute greatly to its ailing financial status.

WHAT IS FINANCIAL FAIR PLAY?

Financial fair play is about improving the overall financial health of European club football. It was approved in 2010 and the first assessments kicked off in 2011.

Since 2013, clubs have also been assessed against break-even requirements, which require clubs to balance their spending with their revenues and restricts clubs from accumulating debt.

In assessing this, the CFCB analyzes each season's three years' worth of club financial figures, for all clubs in UEFA competitions.

The first sanctions and conditions for clubs not fulfilling the break-even requirement were set following this first assessment in May 2014.

The conditions relating to non-compliance with break-even requirements were effective for the 2014/15 campaign.

From June 2015, UEFA updated its regulations (as it does from time to time for all regulations) to address some specific circumstances with the aim to encourage more sustainable investment while maintaining control on overspending.

For the first time the work of the CFCB is potentially expanded to include clubs not yet qualified for UEFA competitions but who anticipate and want to participate at some stage in the future.

Clubs can spend up to 5 million euros more than they earn per assessment period (three years).

However it can exceed this level to a certain limit, if it is entirely covered by a direct contribution/payment from the club owner(s) or a related party. This prevents the build-up of unsustainable debt.

If a club is not in line with the regulations, it will be UEFA's Club Financial Control Body that decides on measures and sanctions.

Non-compliance with the regulations does not mean that a club will be excluded automatically, but there will be no exceptions.

Depending on various factors (e.g. the trend of the break-even result) different disciplinary measures may be imposed against a club such as warning, reprimand, fine, deduction of points, withholding of revenues from a UEFA competition, prohibition on registering new players in UEFA competitions, restriction on the number of players that a club may register for participation in UEFA competitions, including a financial limit on the overall aggregate cost of the employee benefits expenses of players registered on the A-list for the purposes of UEFA club competitions, disqualification from competitions in progress and/or exclusion from future competitions and withdrawal of a title or award.