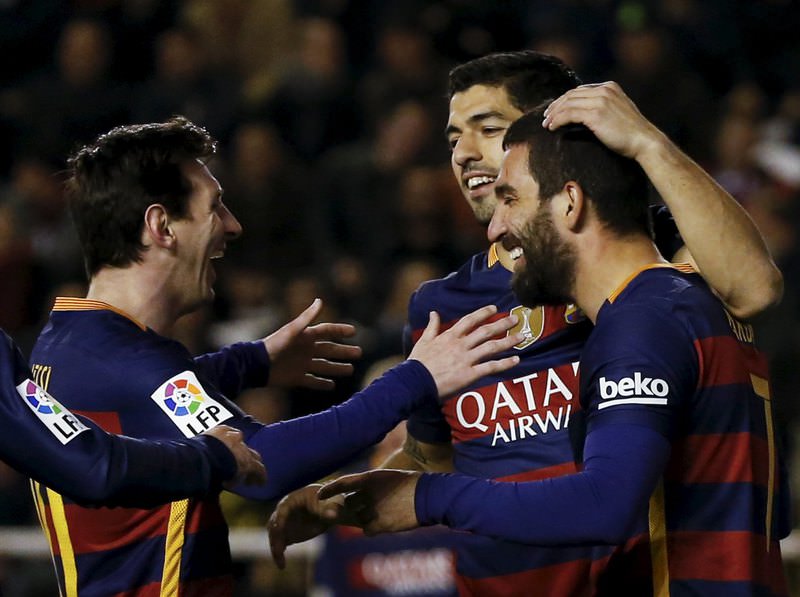 Turkey captain Turan scored his first goal for the club since joining from Atletico Madrid during the Catalan giants’ 5-1 victory over Rayo Vallecano as Barcelona became the first Spanish club to play 35 consecutive matches without a loss, breaking Real Madrid’s record from nearly three decades ago

Catalan giants Barcelona kept their eight-point lead over Atletico Madrid with a 5-1 romp at Rayo Vallecano, with Lionel Messi banging in a hat-trick and Turkish midfielder Arda Turan scoring his first goal since joining the club. The 29-year-old came on after 66 minutes in place of the Croatian international Ivan Rakitic. Turan momentarily looked to have received a red card before the referee realized his mistake and switched the red card for the yellow card. The Turkish international's goal came in the 86th minute when he headed in a cross from Jeremy Mathieu.

"Now the best part of the season begins, when we will see if we can achieve our goals," Barcelona coach Luis Enrique said. "When this team is playing at this level, it is very hard to stop us."

Real Madrid's record of 34 successive unbeaten games was set in 1989 under coach Leo Beenhakker and with players such as Emilio Butragueno and Hugo Sanchez. Barcelona hasn't lost since October in the league's seventh round.

"We hope the streak continues because it will mean that we are adding points," Barcelona's Sergio Roberto said.

With the five goals on Thursday, Barcelona tied Real Madrid's offense as the best in the league this season with 74 goals in 27 games. Rayo have lost 10 straight games to Barcelona since returning to the first division in 2011, being outscored 28-4 in the last six. Its previous win over the Catalan club was in 2002. It lost 5-2 earlier this season, when Neymar scored four goals at the Camp Nou. Messi last year scored a hat trick in a 14-minute span against Rayo.

Turan told Mundo Deportivo: "I have a good example in Andres Iniesta and I am learning from him."

The Turkish international also stated that the playing style of Barcelona suits how he likes to play football but that he still has room to develop his game.

"I must accept this style and manage to fit myself in as one more piece of this team. It suits my style, but I must know what my position is. Instead of playing the ball a lot, I must know where I must receive the ball, and where I must play it to," he added.

Turan described joining Barcelona as being something along the lines of returning to school. The 29-year-old underlined that Barca has a unique style that takes time to learn and adapt to.

"First, you must see Barca as a school, the whole world plays one game, and Barca plays another," he said.

"Every day I am learning our style of play, improving, sharing things, I am enjoying it and we will keep going like this."

Turan has had the chance to play in the same midfield as Iniesta this season he has even played in the same position as the Barca star. Iniesta will go down as one of the most successful Barcelona players in club history having won seven league titles and four Champion League trophies. The experienced midfielder has also won three Copa del Rey, three UEFA Super Cup and three World Club Cup titles in a star studded career.
Last Update: Mar 04, 2016 11:24 pm
RELATED TOPICS