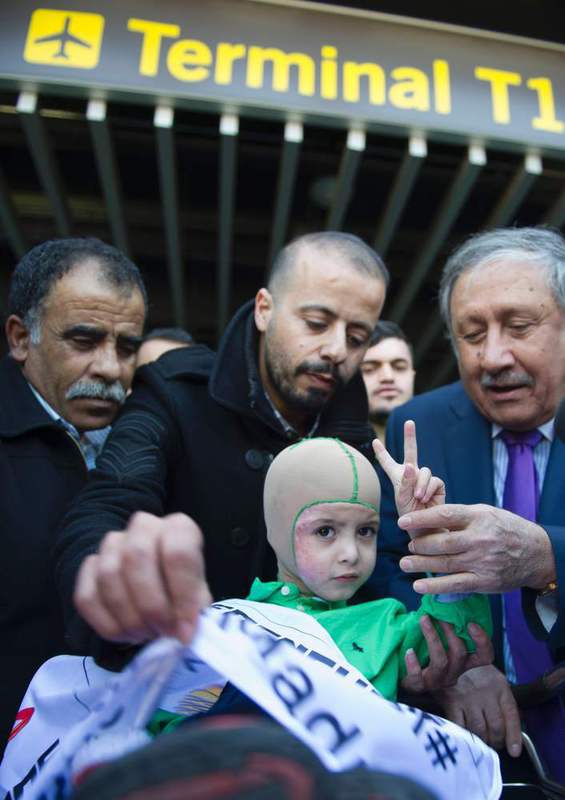 A Palestinian boy who survived a firebombing by Jewish extremists that killed his parents and baby brother arrived yesterday in Spain where he will meet Real Madrid stars including his idol Cristiano Ronaldo. Five-year-old Ahmed Dawabsha, who has been recovering from his injuries over the past eight months, was welcomed at Madrid airport by a small group of well-wishers waving Palestinian flags.

A Real Madrid spokesman told AFP the boy, who wore a cap that covered his burns, would be received at the club's stadium today for a "private visit" that would be closed to the media. Ahmed is expected to meet triple Ballon d'Or winner Ronaldo, the Portuguese star of the football club who invited the boy to visit once he was well enough to make the trip. Ahmed was the sole survivor from his immediate family from a July 2015 attack on their home in the village of Duma in the occupied West Bank. The attack killed his 18-month-old brother Ali Saad Dawabsha and fatally wounded his parents. Ahmed was hospitalised with severe burns.

"He is doing better, but a lot of time and care is still needed for him to truly recover, his grandfather Hussein Dawabsha said on Tuesday before heading to Spain with Ahmed. The attack drew renewed attention to Jewish extremism, sparked international condemnation and worsened tensions between Israelis and Palestinians.

Palestinians moved by images of the bandaged boy wearing a Real Madrid jersey campaigned for months on social media to persuade the team to meet Ahmed. Palestinian Football Association head Jibril Rajoub said Real Madrid were "restoring hope for a child who lost his entire family".

Ronaldo in December met a three-year-old Lebanese boy who had lost both parents in a suicide bombing in his home country. His rival Lionel Messi was similarly moved by the plight of another five-year-old boy. Afghan boy Murtaza Ahmadi won the Internet's heart when he was pictured wearing a plastic bag as an improvised Messi jersey. He travelled with his family to Kabul last month to receive two jerseys autographed by the Barcelona star and presented to the young fan by UNICEF.