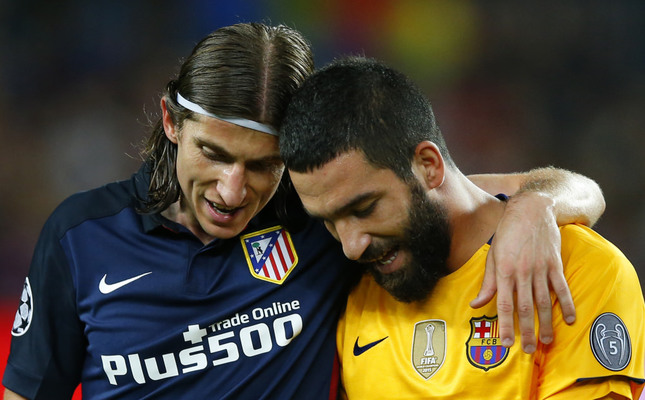 Suarez delivered a win with two second-half goals for Barcelona in the first leg of the Champions League quarter final against Atletico Madrid, which was left with10 players after Torres who scored the Spanish team's only goal, was shown a red card

Torres got Atletico off to the perfect start as he slotted home Koke's through ball for a vital away goal on 25 minutes, but saw two quick-fire yellow cards to leave his side a man short for more than an hour.

A second-half onslaught from Barca ensued and Suarez turned the game on its head as he bundled home to equalize, before powering in a header for the winner 16 minutes from time.The sides meet once more to decide who will progress to the semifinals at Atletico's Vicente Calderon on April 13. "Obviously a sending off in the first half will affect the game, even more when it's a great player," Suarez said. "Everyone knows his quality, but he made two strong fouls. It was a pity; I would have liked to come back against 11."

However, Atletico were incensed as Suarez twice escaped punishment for a kick out at Juanfran and an off-the-ball incident with Filipe Luis. "There were more than two incidents involving Suarez," said Atletico boss Diego Simeone. "I can't say what I think, but I am not angry with Fernando for sure."

Luis went even further by implying UEFA are scared to see Barcelona not reach the final. "I don't know what Barca players have to do to get sent off just like us," Luis told Spanish TV station MEGA. "You can tell there is fear that Barca will be eliminated."

Barca had been beaten for the first time in 39 games stretching back six months by Real Madrid on Saturday and were again far from their best as Atletico looked comfortable until Torres was given his marching orders 10 minutes before half-time.

Lionel Messi was looking for his 500th career goal for club and country, but was unusually wayward as he pulled a shot beyond the front post and then miscued wildly on the volley from Jordi Alba's dangerous cross.

Atletico boss Diego Simeone had been brave in his search for an away goal by naming Yannick Carrasco alongside Torres and top-scorer Antoine Griezmann in attack. And the Argentine was rewarded when Koke's through ball exploited a huge gap in the Barca defense, which Torres latched onto before rifling home his 11th goal in 17 games against Barca.

Griezmann was desperately close to doubling the visitors' lead moments later when only a brilliant save from Marc-Andre ter Stegen prevented the French international's low effort from drifting in at the far post.

Yet, Barca were handed a lifeline by two moments of madness from Torres as he lunged in late on Neymar and then Sergio Busquets within six minutes to see red. Atletico retained a threat at the start of the second half as Carrasco's dangerous low cross whistled across the Barca goal.

Barca's superstar front three of Messi, Suarez and Neymar then came to life as the hosts camped Atletico inside their own half for the final 40 minutes. Messi's acrobatic overhead kick flew inches wide of the target before Neymar curled against the bar. Jan Oblak was then forced into his first saves of the night from Neymar's close range header and Messi's drive from distance.

Atletico's resistance lasted just more than an hour until Neymar drilled Dani Alves's cross goalwards and Suarez was on hand to bundle home his 44th goal of the season.

And his 45th followed 12 minutes later as he powered in another Alves cross to keep Barca on course to become the first side to ever retain the Champions League. However, Atletico bravely limited the damage in the final stages to maintain their hopes of repeating their feat of dumping Barca out at the quarter-final stage two years ago.