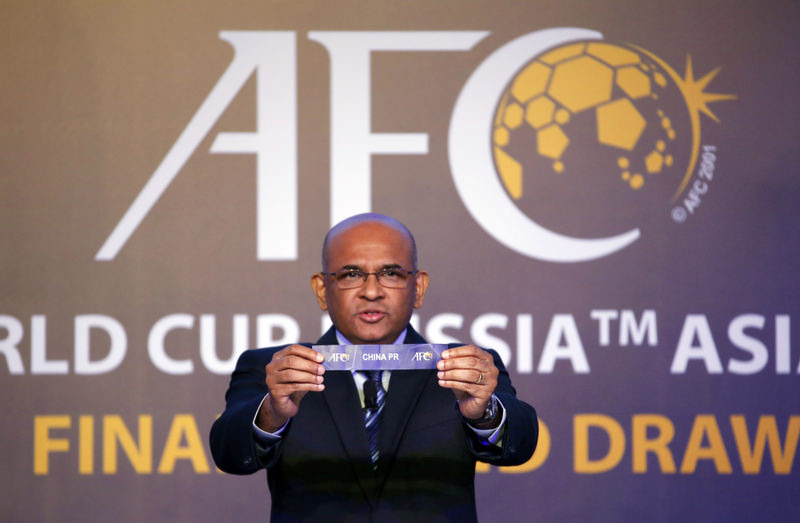 Since being chosen to host the 2022 tournament, Russia 2018 represents Qatar's last chance to qualify for a World Cup on merit before automatically playing as hosts in 2022

Qualifying for the 2018 FIFA World Cup Russia is reaching its final throes in Asia and just 12 nations from the world's most populous continent remain in the hunt for a spot at the global extravaganza that will kick off in just over two years' time. If Jose Daniel Carreno's emerging side manage to progress from the third round, they will make history as the first Qatari team to play in football's biggest tournament. Fail and Qatar will face four years of inevitable sneering that come 2022 their place. "It is important that we are there (Russia)," Hassan Al-Thawadi, head of the Supreme Committee for Delivery and Legacy, the body overseeing organisation of the 2022 World Cup, told AFP. "The fact of having 2022 is an extra motivation for the players." Despite the burden of expectation and, no doubt, many critics wanting to see Qatar fail, the national side have got to the third round with one of the most impressive qualifying records in the AFC. They won the first seven of their eight Group C matches, losing only to China in the final match, when Qatar's progress to the next round was already assured. Along the way they set a record for their biggest ever victory -- 15-0 versus Bhutan -- and finished with a goal difference of plus-25.

That, however, has only served to increase the pressure. "The dominance Qatar showed in the group stages of Round 2 would have immensely increased the expectation of the people," said local sports journalist, Joe Koraith. "They have also been playing a style of football that is pleasing to the eye. So people in Qatar will be hoping for a similar run in the next round." Asian Cup champion Australia and Japan have been grouped together in the last round of Asian qualifying for the 2018 World Cup in Russia. The Socceroos and Japan were drawn into Group B at a ceremony in Kuala Lumpur on Tuesday and will be joined by Saudi Arabia, the United Arab Emirates, Iraq and Thailand. Iran and South Korea were the top-seeded teams in Group A, which also includes China, Uzbekistan, 2022 World Cup host Qatar and Syria.

The teams were drawn into two groups of six, with the matches starting in September. The top two teams in each group qualify automatically, with the third-place teams playing off for a shot at an inter-continental qualifier against the fourth-place team from CONCACAF in November 2017. The teams were seeded and drawn from six pots based on the April 7 FIFA rankings, meaning Iran and Australia - the top teams in the rankings could not meet nor could South Korea and Japan. Australia is expected to open against 2007 Asian champion Iraq at home on Sept. 1 before traveling to the UAE. In October, the Australians travel to Saudi Arabia before returning for a home match against Japan, which has qualified for the last five World Cups. The Saudis reached the Round of 16 in 1994 and played in four consecutive World Cups but haven't qualified since 2006. Also on Sept. 1, Iran opens against Qatar, South Korea hosts China, Japan is at home to UAE, Saudi Arabia takes on Thailand and Uzbekistan meets Syria. Japan is the only team in the group with a winning record against Australia - eight wins and eight draws in their 23 international meetings.

War-torn Syria reached the final round despite the ongoing upheaval, forcing the national team to play the entire second round away from home. The Syrians finished behind Japan in the previous stage to progress as one of the four best second-place teams.
RELATED TOPICS