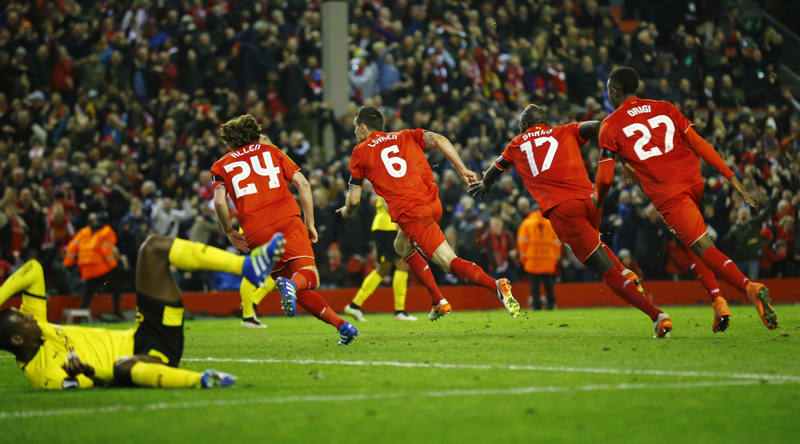 The Europa League quarterfinal had just entered stoppage time and fans at Anfield's famous Kop end were frantically yelling, willing a fourth goal to send Liverpool through. Dejan Lovren spotted James Milner's cross flying through the penalty area and rose at the far post, powering a header into the Borussia Dortmund net, triggering ecstasy among those fans.

"I was really not too sure for a long time if the ball was in," Liverpool manager Juergen Klopp said after the 4-3 victory. "But obviously it was (as) nobody else tells me anything else."

Lovren, a defender, had timed his first goal of the season to perfection. It was Liverpool's fourth second-half goal, completing one of European football's most memorable comebacks. From facing seemingly certain elimination, Liverpool secured a place in Friday's semifinal draw with a 5-4 aggregate win.

"That was pretty cool to watch," Klopp said after eliminating the team he left last year.

The opening nine minutes were not so cool for the German coach. Having earned a valuable 1-1 draw in Germany last week, Liverpool started poorly on home soil, conceding quick goals from Henrikh Mkhitaryan and Pierre-Emerick Aubameyang. Trailing 3-1 on aggregate at half time, Liverpool required at least three goals after the break to advance.

"Very often in football life the game is over then," Klopp said. "Not here. Not with this Liverpool team." Klopp roused his players at half time by evoking memories of Liverpool's famous comeback in Istanbul in 2005.

"I told the lads - I was not there but a few Liverpool players a bit older, most of them work now as experts for television - they were 3-0 down at halftime and won a Champions League final," Klopp recalled. "So even when it's not really likely, it's for sure possible and we should try it."

Klopp's players returned to the field and responded to their manager's appeal within three minutes of the restart. Emre Can slipped the ball through for Divock Origi to slot into the bottom corner of the net. That lifeline was negated when Marco Reus netted in the 57th minute to leave Liverpool still needing a further three goals.

But Liverpool's players drew on the fighting spirit that's been etched into the Liverpool psyche since Istanbul. First came Philippe Coutinho's strike in the 66th, and then two defenders planted two headers in the net: Mamadou Sakho in the 77th and Lovren in stoppage time.

"When they scored the first goal we reacted well and scored a third," Dortmund coach Thomas Tuchel said. "When Liverpool equalized perhaps there was a change in belief in the stadium and perhaps a feeling that it was meant to be.

"If you think back to the Champions League final against Milan and coming back from 3-0, that contributed to the energy in the stadium."

The victory keeps Liverpool in with a shot at silverware in Klopp's first season in charge. Winning the Europa League would also give Liverpool passage into next season's Champions League. Liverpool is a mediocre eighth in the Premier League but on the march in Europe.
RELATED TOPICS