Barca's margin for error runs out after losing run 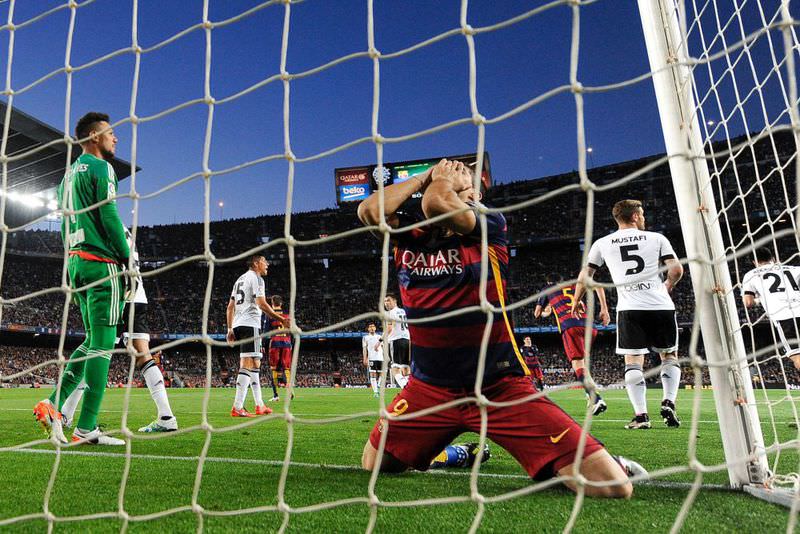 The Catalans had not tasted defeat in 39 games until losing to Real Madrid earlier this month, but have since thrown away a nine-point lead at the top of La Liga and of dumped out the Champions League by Atletico Madrid

Barcelona's players returned from the international break at the start of April confident of achieving an unprecedented second straight treble. Little more than a fortnight later, they have been knocked out of the Champions League by Atletico Madrid and seen their nine-point lead at the top of La Liga eliminated. Sunday's 2-1 defeat at home to Valencia was Barca's third in a row for the first time since 2003, when they finished sixth in the standings and empty handed.

Barcelona still lead the way due to a superior head-to-head record over Atletico, and they also have the upper hand over third-placed Real Madrid who are one point behind.

If they win their five remaining league games, two at the Nou Camp and three away, Barca will retain the league and they could also clinch a domestic double by beating Sevilla in the King's Cup final on May 22. Coach Luis Enrique tried to remain positive after the shock defeat by Valencia, a team they had thrashed 7-0 in a King's Cup semi-final game just two months earlier.

"We still depend on ourselves. Our margin for error has run out and we are aware of the challenge," he told a news conference. "We've got a marvellous challenge, if we win the five games remaining we will be champions.

"I played for Barca for eight years, this is my second as a coach and I have never seen the supporters get behind the team as they did tonight."

Defender Gerard Pique also gave an optimistic message, saying the team had played better against Valencia than in losses to Atletico, Real Sociedad and Real Madrid.

"We can't be worried at all when you look at the way we are playing at the moment. We deserved a lot more but we leave here with our heads held high," he told reporters. "If we play like this we'll win the league, I'm convinced of that. "Although it's a step backwards, playing this well will help the team mentally. We've recovered the sensations from a month ago."

"If Barcelona fail to recover then this will be one of the most dramatic collapses in Spanish football history," commented Radio Marca.

Barca will go to La Coruna without suspended defender Gerard Pique, which could open the door for Marc Bartra given the injury problems suffered recently by Thomas Vermaelen and Jeremy Mathieu. Wednesday will also see Atletico visit fifth-placed Athletic Bilbao, who will be sweating on the fitness of veteran striker Aritz Aduriz. Later Wednesday, Real Madrid - who were 10 points behind Barca a month ago - will host fourth-placed Villarreal, who crashed Sunday 2-1 at lowly Rayo Vallecano.