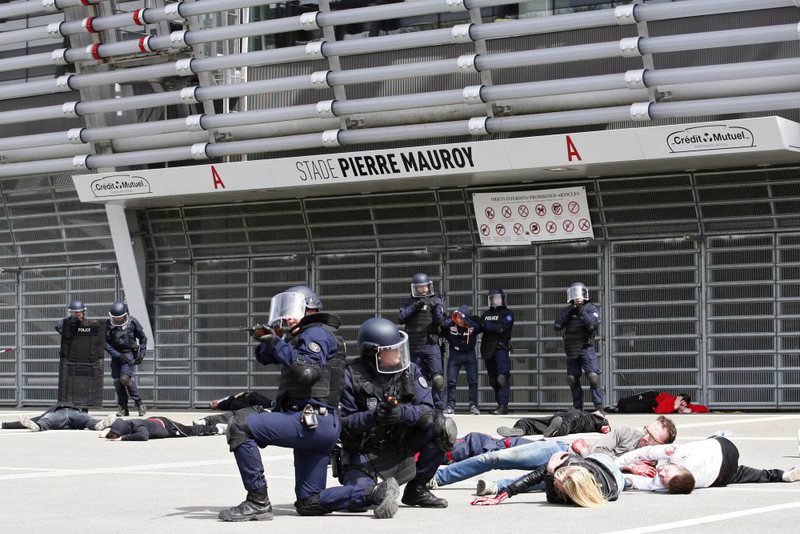 Police officers in an exercise simulating a chemical attack in view of the Euro 2016 championship at the Pierre Mauroy Stadium in Lille in northern France.
by Daily Sabah with Wires Apr 23, 2016 12:00 am

After France announced its plan to extend the state of emergency in place to maintain security through Euro 2016, UEFA said games could be moved to different venues in France, played without fans and rescheduled

Tens of thousands of football fans are set to descend on France in June to see their side compete against 23 other nations. However, security concerns around the June 10-July 10 event, which is expected to attract up to 8 million fans, have been heightened after the Paris and Brussels attacks. UEFA says European Championship games could be moved to different venues in France and played without fans on a different day in response to terror attacks or threats. Euro 2016 organizers have increased the security budget by 15 percent in the wake of the Paris attacks. Authorities also want to simulate all possible threats - radiological, biological and chemical. Two exercises took place in Nimes mid-March. President of the French Football Federation Noel Le Graet assured the public that France has spent considerable effort in the field of security ahead of Euro 2016, although he acknowledged that the Paris terrorist attacks prove how unpredictable such events are. While thousands of extra security staff have been hired for Euro 2016, UEFA told The Associated Press "we are not aware of any specific threat but we want to be prepared."

Amid rising concerns, France plans to extend the state of emergency in place since November's attacks on Paris by two months, to maintain security through the Euro 2016 tournament, French Prime Minister Manuel Valls said on Wednesday. The announcement came hours after police simulated an armed response to a militant attack and hostage-taking at a Paris railway station, and a day after a government pledge to ensure anti-terrorism units could get to any attack site within 20 minutes.

"The state of emergency cannot be permanent, but on the occasion of these big events ... we have decided to prolong it," Valls said on France Info radio. Euro 2016 starts June 10 and runs for a month at 10 stadiums around France. Some 2.5 million spectators are expected for 51 matches involving 24 teams. There will also be fan zones for crowds of TV viewers in major cities.

The current state of emergency giving extra powers to police and security forces runs until May 26. The proposed extension will have to be approved by parliament. Police have had extra powers to search homes, hold suspects and put people under house arrest since the Nov. 13 attacks in which 130 people were killed. The initial move was popular in France, but human rights groups have expressed concern at two extensions that have taken place since.

The Stade de France national stadium north of the capital, which will host the opening match and the final, was the site of a suicide bombing on Nov. 13. Other shootings and suicide bombings took place near the center of Paris at the Bataclan music venue and at cafes.

Security arrangements already planned for Euro 2016 are stricter than usual. The average stadium security presence will be 900 strong, plus 200 volunteer ushers and 80 medics - about 30 percent more staffing than at normal matches of the kind. CRS riot police and Gendarmerie divisions will also be deployed in the host towns.

A number of attack simulations have already taken place in connection with the event. Late on Tuesday night, the Gare Montparnasse, a railway station in south-central Paris, resounded to explosions and gunfire as special police forces in full battle dress carried out drills and simulations.

Since the attacks in Brussels, many politicians on the right have cast doubts over how safe the fan zones will be and fear that the high-profile supporters areas such as the one in the shadow of the Eiffel Tower will be targeted.Fan zones, which will be based in each of the 10 host cities, are expected to welcome between 10,000 and 100,000 supporters during matches.
Last Update: Apr 23, 2016 1:19 am
RELATED TOPICS