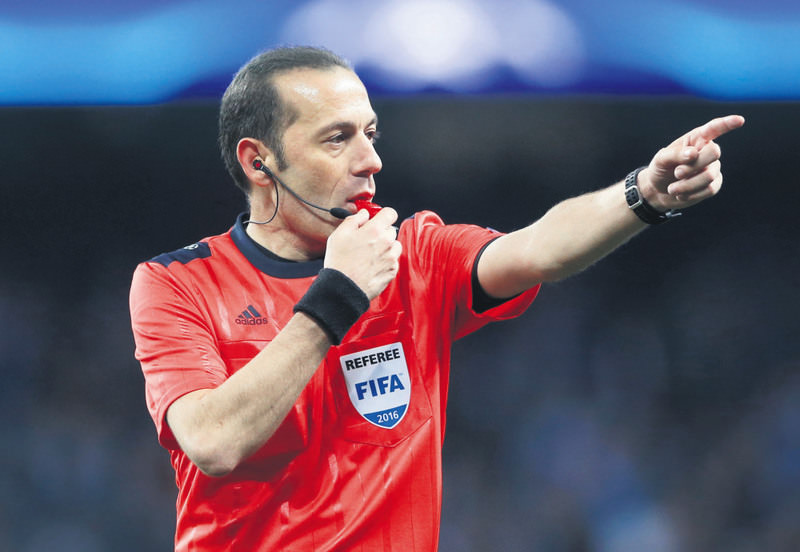 He is also the first Turkish referee to take charge in a UEFA Champions League final, after having officiated the 2015 final between Juventus and Barcelona.

Çakır, an insurance agent who turns 40 in November, rose to the UEFA's Elite category of referees in June 2011.

As for the game, Bayern Munich are desperate to avoid losing a third consecutive Champions League semi-final to Spanish opponents when they host Atletico Madrid today but coach Pep Guardiola has his work cut out to end his time in Germany on a high.

Guardiola inherited the reigning European champions when he joined Bayern in 2013, but has endured successive semi-final failures since, falling to Real Madrid in 2014 and to his former club Barcelona last season. His hopes of reaching a first Champions League final since his Barcelona side beat Manchester United 3-1 in 2011 were dented after Saul Niguez's brilliant solo goal gave Atletico a 1-0 first-leg victory. With Guardiola leaving for Manchester City at the season's end, this is his last chance to conquer Europe with Bayern, who won the first of their five European Cups by defeating Atletico in the 1974 final.

"Playing in Munich means they'll have their fans supporting them, but we have the opportunity to score an away goal."

"We need to be on fire on Tuesday," said Thomas Mueller, who shone as Bayern were held 1-1 by Borussia Moenchengladbach on Saturday and were consequently made to wait for their fourth consecutive Bundesliga title.

Mueller's return was one of eight changes from the Atletico match made by Bayern, who were boosted by the return of Jerome Boateng, who had not featured since January.

Arjen Robben, sidelined for two months with a hamstring injury, says that he is "fighting" to return this season but will miss out, while Guardiola confirmed he does not know whether Franck Ribery will recover from a back complaint.
RELATED TOPICS