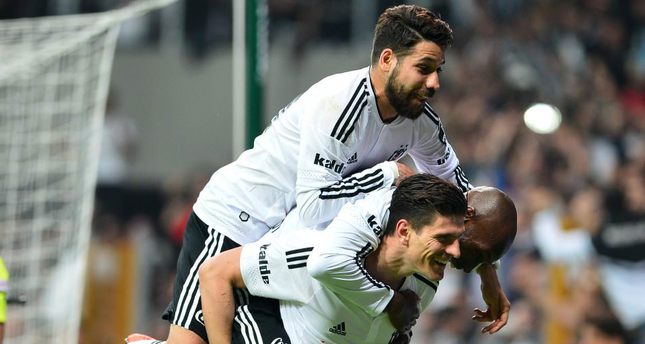 Beşiktaş cemented their hold on the top spot in the Super League with a 1-0 win over Istanbul rivals Galatasaray on Sunday night. The Black and Whites have cleared the biggest hurdle in the title race and kept their lead over second-placed Fenerbahçe with two weeks to go. German striker Mario Gomez, who scored in the 77th minute at Galatasaray's Türk Telekom Arena Stadium, equaled the record set by former foreign striker Demba Ba of scoring 27 goals in official matches in a season. However, Gomez has a good chance of setting the record as Beşiktaş still have two matches to play in the Spor Toto Super League. If he scores just one goal more he will be the top scoring foreign footballer in official matches in a season in Beşiktaş's history.

Gomez has scored 25 goals in the Spor Toto Super League and has managed to find the net in five consecutive matches. The German footballer also scored against Galatasaray in the first half of the season. Gomez also found the net twice against the other archrivals Fenerbahçe and so he managed to score in three of four derbies. Beşiktaş have beaten Galatasaray on their home turf five matches in a row.

Galatasaray's dreams of qualifying for European tournaments have weakened now they are ranked seventh. A team must be ranked fifth at least in order to qualify. Galatasaray have 45 points but Osmanlıspor who are ranked fifth, have 49 points with two matches to go in the Spor Toto Super League.

Galatasaray also set a record they'd rather not have after the derby. For the first time in their history, they have conceded 48 goals in a Super league season. The Lions had conceded 47 goals in the 2003-04 season. Also, their 14-game unbeaten run at home ended. The Red-Yellows have not won a derby match in four years.

If Beşiktaş can win and draw in the last two matches, they will win the Spor Toto Super League for the first time in seven years. Beşiktaş will host Osmanlıspor and after that they will visit Konyaspor in the last match of the season. Beşiktaş fans celebrated the win on Sunday night. However, the administrators are cautious. They have urged fans to be calm and to not celebrate too early.

Beşiktaş spokesperson Metin Albayrak said, "We played better in the second half and deserved the win. Now we are waiting for next week to take the top position. We got very important three points but we are not the champions yet. The competition is still open mathematically."

Beşiktaş - Galatasaray is a Turkish football rivalry involving two of the most successful clubs in the Super League. It is also a local derby, one of many involving Istanbul clubs.
RELATED TOPICS