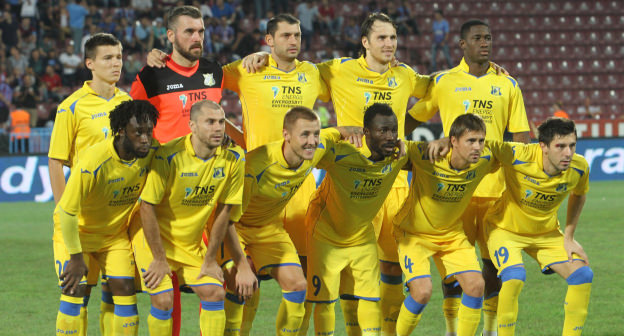 FIFA drug testers arrived unannounced Thursday to collect samples from Russian soccer team FC Rostov amid suspicions of meldonium use during its surprise pursuit of the league title.

Rostov only remained in the Russian top flight after a relegation playoff last year and has surprisingly been involved in the title race this season. Dvorak said Rostov, which is owned by the regional government in southern Russia, was "absolutely" compliant with his drug-testing team.

"We tested the entire team, the 11 who were on the start list," Dvorak told the AP at the FIFA Congress in Mexico City shortly after the tests were completed in the Russian capital. "The entire procedure took two hours. It is done and the samples will be tested in one of the accredited laboratories in Europe."

Meldonium was banned beginning Jan. 1 by the World Anti-Doping Agency. There have been more than 170 failed tests in various sports and countries — many in Russia — since the drug was prohibited.

The Latvian-made drug, which is typically prescribed for heart conditions, was widely used as a supplement by athletes in Eastern European countries. The drug increases blood flow, which improves exercise capacity by carrying more oxygen to the muscles.

"There were some rumors in the media about meldonium and Rostov ordering meldonium," Dvorak said. "What is true on it I can't really say anything ... we are not really following every rumor but (with) the current situation with meldonium we thought it is just a good example just to do it."

The highest profile case involves Maria Sharapova, who announced that she tested positive during the Australian Open in January.

Seven of Rostov's starting 11 players on Thursday were born in Russia.

It is not the first time FIFA has had suspicions about a Russian soccer team. Russia's national team was covertly tested before the 2014 World Cup to see if they were inhaling xenon gas, Dvorak said. No players were found to be using the substance that was only banned by WADA later in 2014.

Dvorak conducted the xenon checks after hearing rumors Russian athletes at the 2014 Sochi Olympics were using the gas, which is said to artificially increase the levels of erythropoietin (EPO) in the blood.

"We use our brain. We do intelligence testing," Dvorak said. "It was more that I was curious whether this substance (xenon) is used routinely. I haven't announced it (to Russia). I just asked the laboratory, 'Can you examine that.'