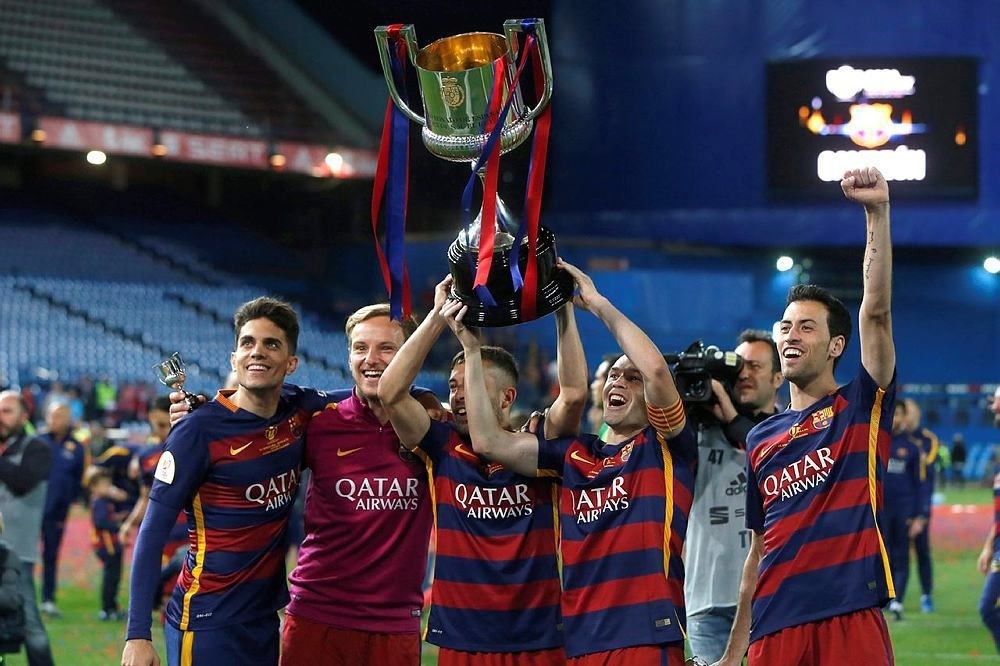 FC Barcelona's players celebrate their victory after the Spanish King's Cup final between FC Barcelona and Sevilla FC at Vicente Calderon stadium in Madrid, Spain, 22 May 2016. (EPA Photo)
by Associated Press May 23, 2016 12:00 am

Jordi Alba scored seven minutes into extra time and Neymar sealed the victory late to give Barcelona a 2-0 win over Sevilla for its second straight Copa del Rey title on Sunday.

After 0-0 in regulation time, Alba found the net with a low left-footed shot into the far corner after a superb long pass into the area by Lionel Messi.

Neymar closed the scoring in injury time after another perfect set-up by Messi to give Barcelona its 28th Copa trophy.

"It's a great way to end the season," said Barcelona midfielder Andres Iniesta. "It was a wonderful season. We continued to add to the club's history."

Barcelona, which clinched its 24th Spanish league title last weekend, played with 10 men from the 36th minute after defender Javier Mascherano was sent off with a straight red card for pulling the jersey of Kevin Gameiro to keep the French striker from entering the area with only the goalkeeper to beat.

The Catalan club also lost Luis Suarez with an apparent muscle injury early in the second half. The Uruguay striker, who cried on the bench after being substituted, had been crucial for Barcelona in the final stages of the Spanish league, scoring 14 goals in the last five matches.

Sevilla, which won the Europa League final against Liverpool on Wednesday, also played the extra time with 10 men after midfielder Ever Banega was shown a straight red in second-half injury time for fouling Neymar just outside the area as the Brazilian tried to get into position to score. Sevilla further lost defender Daniel Carrico with two yellow cards just before Neymar's goal late in the game at Atletico Madrid's Vicente Calderon Stadium.

Alba had broken the deadlock after Messi lobbed a perfect pass over a defender into the area, allowing him to calmly wait for the ball to bounce before pushing it across the goal near the far post.

Sevilla was trying to win its sixth Copa title, and first since 2010.

Sevilla controlled possession after Barcelona went a man down and was close to scoring several times, with its best chance coming on a low shot from outside the area by Banega that struck the post in the 50th.

Barcelona relied on counterattacks but never threatened much until extra time started with both teams even with 10 men. Its previous best chance had come on a free kick taken by Messi and easily saved by Sevilla goalkeeper Sergio Rico in the 70th.

It was the second final between the teams this season, with Barcelona needing extra time to win the European Super Cup last August. The teams exchanged home victories in the Spanish league.

Barcelona was more rested than Sevilla because it had a full week to prepare for the final, while its rival played the midweek Europa League final.

After a weeklong controversy, Barcelona's Catalan fans were allowed to display pro-independence flags at the stadium. A Madrid court had banned them because of security reasons, prompting public criticism, but the ruling was reversed on Friday after an appeal.