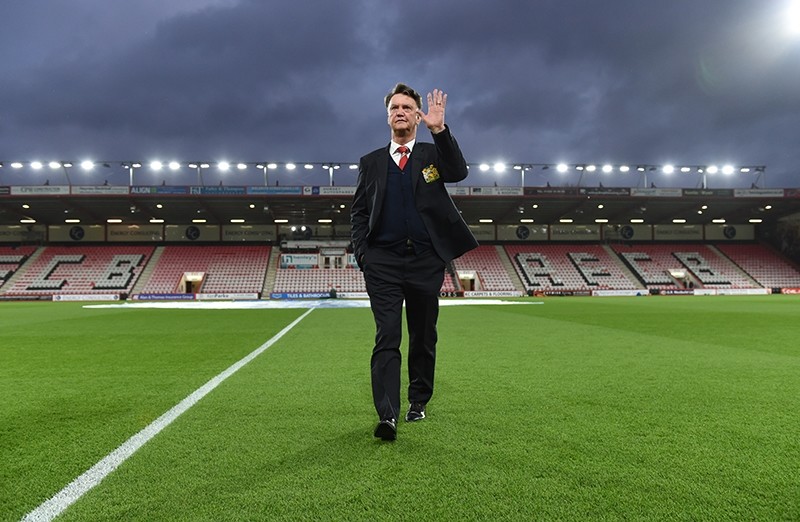 Manchester United manager Louis van Gaal has left the Premier League club, he said in a statement on Monday.

"I am very disappointed to be unable to complete our intended three-year plan," he announced on the United website (www.manutd.com)

"I believe that the foundations are firmly in place to enable the club to move forward and achieve even greater success."

The Dutchman, 64, led United to victory in the FA Cup final against Crystal Palace on Saturday. They finished fifth in the Premier League, missing out on a place in next season's Champions League.

Van Gaal signed a three-year contract to take over as manager of the Old Trafford club in 2014.

Former Real Madrid and Chelsea manager Jose Mourinho will be named as United's next manager this week, British media have reported.

Here are some of the highs and lows of his tenure at United.

"Now I have won the cup in four countries," a grinning Van Gaal said after the 2-1 extra-time win over Crystal Palace on Saturday. "Not many managers can say that"

It didn't count for much in the end — within an hour of the final whistle, it was being widely reported that Van Gaal would soon be out of a job — but the victory at Wembley Stadium at least gave him something tangible to take from his reign, and is his undoubted high point.

It got United back among the trophies after a three-year gap and gave the club a record-equaling 12th FA Cup title.

1. TOP OF THE LEAGUE

It seems a while ago now, but United was top of the league this season.

A commanding 3-0 win against Sunderland last September saw United climb the summit for the first time in two years.

"It is a very nice feeling, being top," Van Gaal said. "It is not so easy to keep that."

And that was as good as it got for United in the Premier League under the Dutchman.

A fourth-place finish in the 2014-15 season saw United return to the Champions League after a one-year absence. United was back where it belongs — among Europe's elite.

And everything pointed to a successful season in 2015-16 when United surged to an easy two-legged win over Club Bruges in the Champions League playoff in August, with new signing Memphis Depay demonstrating his full range of skills and Wayne Rooney scoring a hat trick in the second leg to end a goal drought of more than nine games.

He appeared ready to embark on a relentless scoring run but instead, he managed only four more goals until January. His barren run coincided with a gradual but continual slide in United's form.

If one match under Van Gaal cements itself fondly in the memories of United supporters, it is the 2-1 victory against fierce rival Liverpool at Anfield in March 2015. It strengthened United's grip on fourth and derailed Liverpool's efforts to replace United in the Champions League qualifying places. To make it sweeter for United, Liverpool captain Steven Gerrard was sent off in his last appearance against United before joining the Los Angeles Galaxy.

A 4-2 comeback victory against crosstown rival Manchester City the following month saw a rare attacking demonstration from the Van Gaal's side and the Dutchman leaves having lost just one of four Manchester derbies. He also won all four league matches against Liverpool.

1. MISSING OUT ON CHAMPIONS LEAGUE

A failure to guide United into next season's Champions League badly damaged Van Gaal's stock. A finish in the top four, coupled with winning the FA Cup, and Van Gaal might have limped on.

As it was, a second season in three years away from the European elite, missing out on the prestige and vast riches, and playing on Thursday nights in the Europa League just wasn't good enough for the Old Trafford hierarchy.

Playing in the Champions League is the minimum requirement at United and Van Gaal couldn't deliver it.

Van Gaal had earlier disappointment with the Champions League this season.

United was eliminated at the group stage after losing 3-2 to Wolfsburg on Dec. 8 in a match United headed into knowing victory was essential.

When United was pitted in a group with PSV Eindhoven, Wolfsburg and CSKA Moscow, the draw was viewed as favorable for Van Gaal. But the doomed European campaign was symptomatic of United under his guidance — the team appeared focused on defensive organization and lacked the attacking flair and creativity to break down stubborn opponents.

A loss to Stoke on Dec. 26 was United's fourth straight defeat and left Van Gaal looking bewildered and pondering his future when he faced the media after the match.

"It is not always the club that has to fire (me)," Van Gaal said. "Sometimes I do that by myself."

He had walked out of a news conference after four minutes, 58 seconds in the build-up to the Stoke match, after speaking of his frustration at Jose Mourinho being linked with his job.

But another stagnant display at Britannia Stadium left the Dutchman appearing to be headed for the exit.

Failure to reach the Champions League under David Moyes, Van Gaal's predecessor, meant United entered the League Cup in the second round for the first time in 19 years.

United was drawn to play third-tier MK Dons on the back of encouraging news, having confirmed the signing of playmaker Angel di Maria from Real Madrid in a 59.7 million pound ($84 million) deal — a British transfer record.

But MK Dons doused any excitement around the club by recording an emphatic 4-0 victory.

While Van Gaal handed starts to a number of youth players, first-team players such as David de Gea, Danny Welbeck and Adnan Januzaj all featured and United was embarrassed.