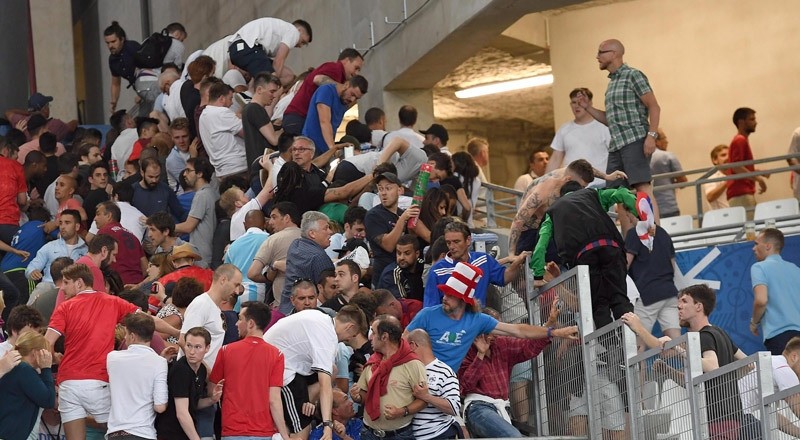 The UEFA disciplinary committee is to investigate the violence between fans which marred the conclusion of the Euro 2016 match between England and Russia in Marseille, the European governing body said on Sunday.

UEFA gave no further information about the details of the investigation.

UEFA had early condemned the violence in Marseille, in with one man is in a critical condition, at least 34 others injured and eight arrested.

"UEFA firmly condemns the incidents in Marseille. People engaging in such violent acts have no place in football," the governing body said in a statement.

Rival supporters and locals had been involved with clashes and locals in the days ahead of the match Saturday and further violence in the city took place on match day as police used tear gas a third straight day to get the situation under control.

Supporters could be seen attacking each other with chairs and metal rods in footage shown on French television and posted on social media.

Local police has mobilized more than 1,000 officers to keep the fans in check.

Nunes expressed regret about the injuries and French interior Ministry spokesman Pierre-Henry Brandet also said it was not acceptable to have a fan fighting for his life.

But, in an interview with the BFMTV network, he also praised "the quick intervention of the security forces" and dismissed suggestions that France had not been properly prepared.

"If there has been a failure then it is a failure of football which shows that it suffers from a part of its fans. Unfortunately all international tournaments over some 30 years have been tainted by clashes between fans," Brandet said.

The French media reacted shocked, with sports paper L'Equipe Sunday speaking of "The shame" and Le Parisien of "scenes as in a cival war" which were insult for the image of France which remains in a state of emergency ever since the November 13, 2015 terror attacks.

Russian sports minister Vitali Mutko was meanwhile quoted in Russian media as saying security measures in the stadium were not up to standard as Russian fans lit flares and then charged into the section with English supporters.

"You must organise such games well and separate the fans," Mutko said, also noting an absence of safety nets to prevent obstacles from being thrown onto the pitch.

Mutko, who is also Russian football federation chief, said he expects a fine from UEFA and pledged to punish the offenders once they have been identified.

England's Football Association (FA) issued a statement calling on English fans to "act in a respectful manner" and said it was "disappointed by the scenes of disorder in Marseille."

English fans had already been involved in serious clashes in Marseille during the 1998 World Cup.

The violence has also spread to the city of Nice where police said Sunday that three people were arrested and nine injured in a fight during the night between fans from the local ultra scene and supporters from Poland and Northern Ireland whose teams were playing Sunday.