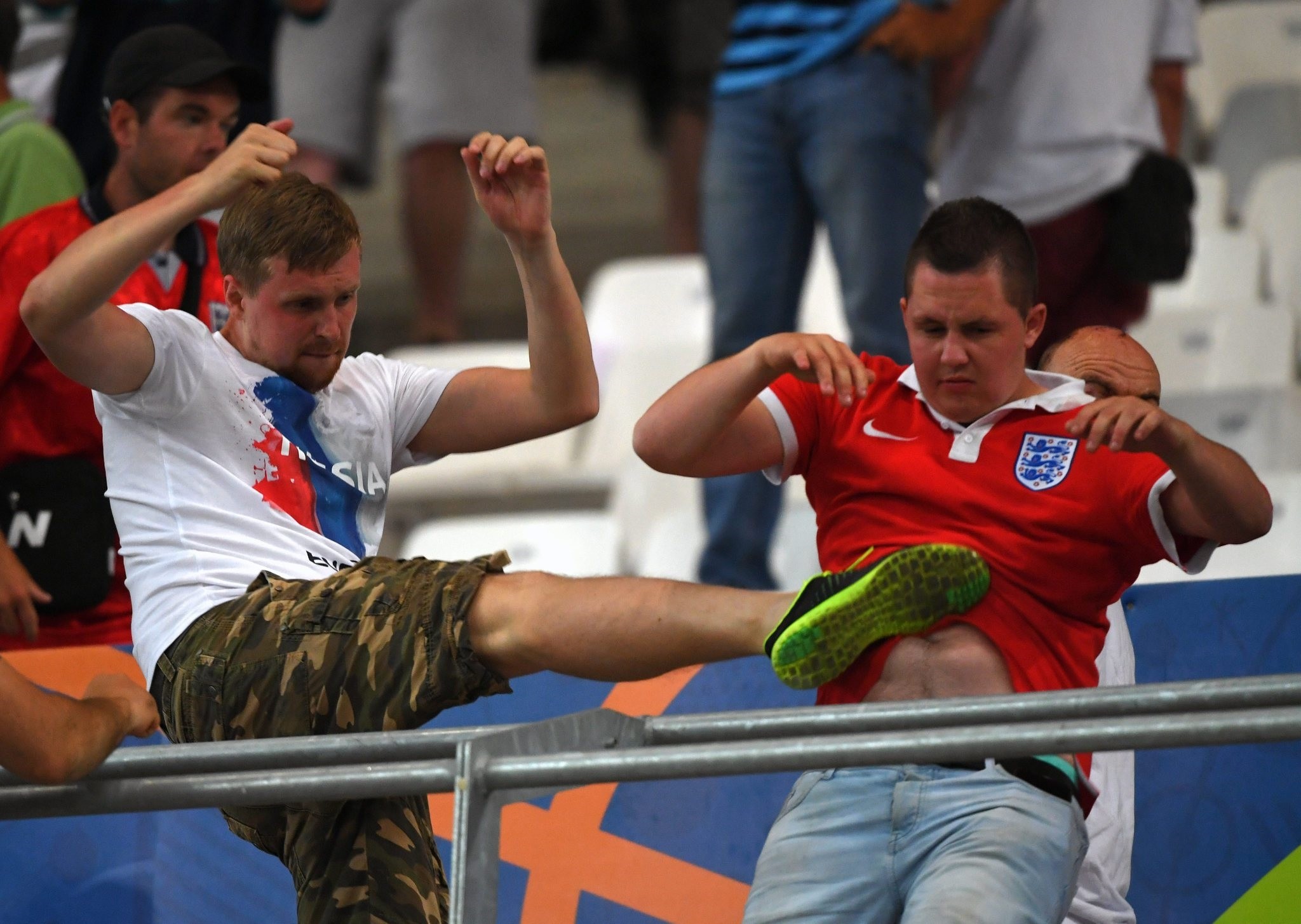 Continued violence after three days of ugly skirmishes between English, Russian and French fans in Marseille draws a tough response from riot police. UEFA launched disciplinary proceedings against the Russian Football Union after its fans assaulted their English counterparts at the end of the Euro 2016 match between the two countries

World football fans witnessed embarrassing scenes in France over the first days of the Euro 2016 Championship. Brawling fans, tear gas and riot police returned to the streets of Marseille before and after England's 1-1 draw with Russia in the European Championship. Clashes between English and Russian supporters even broke out inside the stadium following the final whistle, after Vasily Berezutsky headed the equalizer in stoppage time. England had taken a 73rd minute lead through a superb free kick by Eric Dier. The fighting in Stade Velodrome came on the third straight day of hooliganism in the Mediterranean port city. Moments after the final whistle in Stade Velodrome, masked Russian supporters charged England fans, punching and kicking them. Some England fans had to scramble over barriers to escape. The latest incidents prompted police to use water cannons on the troublemakers.

European soccer's governing body, the UEFA, launched disciplinary proceedings against the Russian Football Union yesterday. The UEFA said it was also investigating allegations of racist behavior, the throwing of missiles and use of fireworks. Russian Sports Minister Vitaly Mutko, who had initially denied that there had been any crowd disturbance, said the UEFA was "right" to investigate.

The violence in the stadium followed three days of ugly skirmishes between English, Russian and French fans in Marseille, which drew a tough response from riot police.

In a statement, the UEFA expressed its "utter disgust for the violent clashes that occurred in the city center of Marseille and its serious concern for the incidents at the end of the match inside Stade Velodrome." "This kind of behavior is totally unacceptable and has no place in football," the UEFA said, adding that a decision on sanctions would be made within days.

UEFA warns England, Russia their teams could be disqualified from European Championship if there is further violence.Late on Saturday, fan violence spread to a second French city, Nice, where North Irish and local fans hurled glass bottles and chairs at each other. The French government rallied behind police amid questions over security tactics inside the stadiums. "If there is a failure, it is that of soccer, which is sick because some of its fans are drinking excessively and fighting," Interior Ministry spokesman Pierre-Henri Brandet said on BFM-TV. More security personnel would be deployed to segregate rival fans inside stadiums, a UEFA spokesman said. In the Mediterranean port city, some English fans suggested that French riot police had reacted heavy-handedly and been quick to fire tear gas. Thirty-five people were hurt in the fighting, including one English fan that suffered a heart attack. Marseille Police Chief Laurent Nunez told France Info radio that his force's response prevented "much more serious damage," as 15 people were arrested over three days. "French police forces are not trained to deal with hooliganism," Driss Ait Youssef, a security expert, told BFM-TV. "You never know where a fight will erupt, so the challenge is to redeploy forces in a very short time span." France enlisted more than 90,000 police, soldiers and private security agents nationwide to ensure safety in the face of intelligence organization warnings of potential militant attacks and the threat of hooliganism. "We can address both terror threats and fan violence," Marseille Police Chief Nunez said.

Meanwhile, FIFA has criticized hooligans for causing "shameful scenes" of violence in Marseille in recent days, blaming "a minority of idiotic troublemakers, who have nothing to do with football and its true fans." Germany's top security official says they gave French authorities the details of 2,500 known German hooligans ahead of the European Championship.
RELATED TOPICS