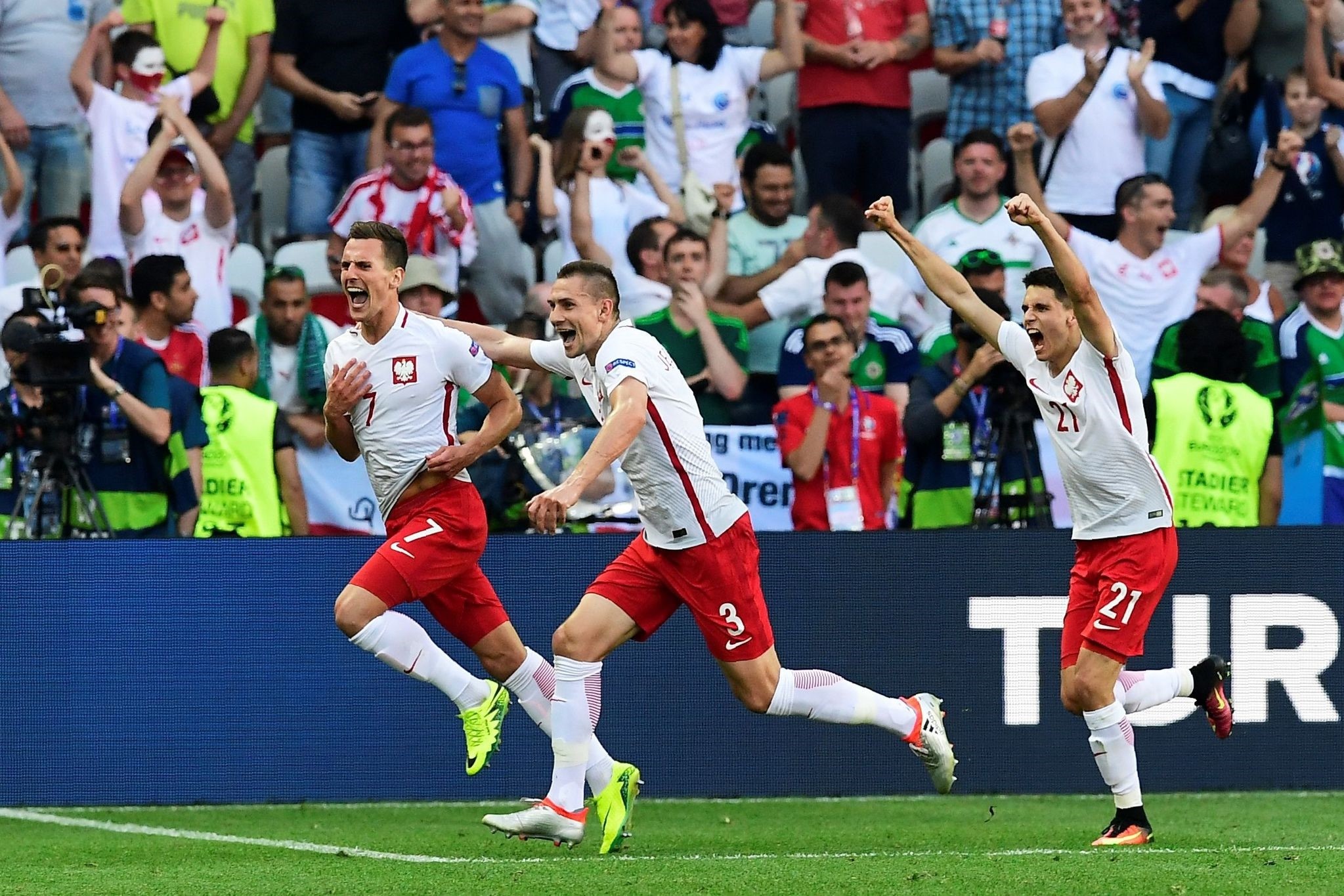 Poland's forward Arkadiusz Milik (L) is congratulated by teammates after scoring a goal during the Euro 2016 group C football match with Northern Ireland (AFP PHOTO)
by Associated Press Jun 13, 2016 12:00 am

In a strong team performance on Sunday, Poland beat Northern Ireland 1-0 to secure its first ever win in the European Championships.

With Poland forward Robert Lewandowski, qualifying's top scorer, marked out of large stretches of the game, there was space for others to make the mark. One was attacking midfielder Arkadiusz Milik, who scored the decisive goal with a low shot in the 51st minute.

It was no more than Poland deserved. The team dominated the Group C match from start to finish and could have easily scored more were it not for some erratic shooting. Northern Ireland Michael McGovern also kept the score down when he fended off a powerful shot from 19-year-old winger Bartosz Kapustka.

"The team has realized that we won't win as individuals," midfielder Grzegorz Krychowiak said through a translator.

Krychowiak even went so far as to say that the team was a dark horse contender to win the tournament. It next faces Germany on Thursday.

"This team is very experienced and we know that this was just only the first match," he said. "In order to win the tournament, we cannot be satisfied with just three points tonight. We know the next match .... will be difficult."

Poland has twice finished third at the World Cup but has had struggled at its previous two appearances at the European Championship, notably in 2012 when as co-host it came last in its group.

Northern Ireland showed a lot of defensive endeavor but failed to register a single shot on target in its first ever European Championship match. A wayward overhead kick from Kyle Lafferty in the 76th was the closest Northern Ireland came to equalizing. Defeat ended the team's 12-game unbeaten run.

The team will probably have to get something out of its next match against Ukraine on Thursday to have any chance of making it into the round of 16.

"There's a sense of disappointment that at times we weren't as good as we could have been," coach Michael O'Neill said. "I thought Poland were excellent. I have to give great credit to my players because we stayed in the game."

O'Neill's Polish counterpart Adam Nawalka said Northern Ireland's physical style meant his team "had to adjust and offer the same," adding that Poland is now focusing on how to beat world champion Germany.

Though Poland dominated large stretches of the match, it will likely need to convert more of the chances it makes to get past Germany.

Goal scorer Milik, for one, missed the target with two efforts in the first 10 minutes and struck the side netting with a rising shot from a good position in the 31st. And Krychowiak had a chance to double the lead in the 88th when his fierce shot from distance flashed wide of the post.

The game took place a day after nine people were injured during disorder in the city provoked by local fans advancing on Polish and Northern Irish fans near the seafront, French authorities said.

Relations between Poland and Northern Ireland supporters were generally warm, with both sets of fans mixing together in many sectors of the Stade de Nice without any obvious tension.

That spirit stood in contrast to the mass violence involving English and Russian fans in Marseille over the previous three days, and the attack by Russian fans on English supporters in the stadium after their teams drew 1-1 on Saturday.

Poland is, however, likely to face UEFA sanctions after a firecracker was thrown onto the pitch from a Polish fan sector.