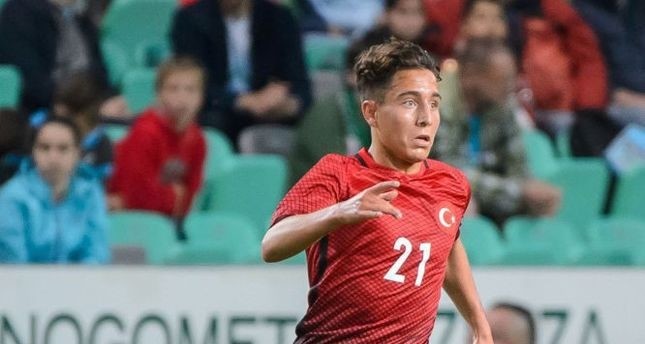 by Daily Sabah Jun 14, 2016 12:00 am
Emre Mor is now the youngest ever player to play for Turkey at a European Football Championship. The 18-year-old footballer is the third youngest player at EURO 2016 behind England's Marcus Rashford and Portugal's Renatos Sanches, though only by a matter of months.

The introduction of Emre Mor, the Denmark-born forward dubbed "The Turkish Messi," drew roars of approval from Turkey's fans. Turkey coach Fatih Terim sent Emre Mor on as a late substitute but the new Borussia Dortmund signing had little chance to shine. "He (Mor) is not an ordinary player but an extraordinary player. We made a good decision by calling him up. I insist he has to learn many things and has to improve physically. He has the potential to be a great footballer," Terim said.

Emre Mor has lived all his life in Denmark and only received Turkish citizenship this year after receiving authorization from his jailed father. Yet the fleet-footed winger, unknown to most Turkish football fans at the start of 2016, has in just weeks become one of the great hopes for Turkey at the European Championship finals. Mor's reputation grew again when Borussia Dortmund signed him from Danish side Nordsjaelland. Mor, who had played for FC Nordsjaelland since 2015, appeared for Denmark's youth side but switched his allegiance this year following an intervention by Terim.
RELATED TOPICS