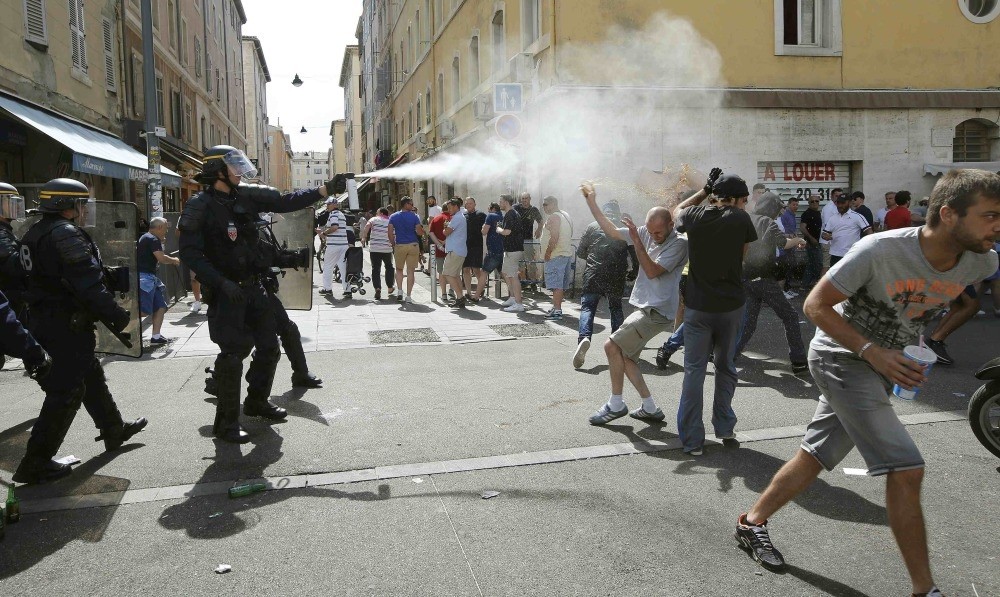 Police use tear gas on supporters near port of Marseille before the game.
by Daily Sabah Jun 14, 2016 12:00 am

While France's government vowed to expel foreign football hooligans, England and Russia were threatened with expulsion from Euro 2016 by UEFA if there is further violence from their fans during the tournament

Football hooliganism has been making a comeback at the European Championship and is challenging French authorities who have struggled to deal with the sudden surge in violence. England and Russia were threatened with expulsion from Euro 2016 by UEFA on Sunday if there is further violence from their fans during the tournament. Clashes between English and Russian hooligans escalated over three days in the center of Marseille before vicious fighting spread to the stadium on Saturday. The Interior Ministry said in a statement that 116 people had been arrested since Friday in incidents connected to the tournament, with 63 of them still being held in prison and the rest released. Three people had been expelled from France and five others barred from entering France, the ministry said.

UEFA acknowledged there were "segregation issues" at the Stade Velodrome where Russia and England drew 1-1 and said it "will implement corrective measures to strengthen the deployment of security personnel at stadiums, in close collaboration with local authorities." Russia, which hosts the World Cup in two years, is already facing UEFA sanctions after its fans were deemed to have orchestrated disorder inside the stadium. English fans behind one of the goals were attacked after the game as stewards failed to keep the rivals apart. UEFA expressed its "utter disgust" about the running battles involving the English, Russians and locals that started Thursday in the center of the Mediterranean port city. Russia has been charged by UEFA over crowd disturbances, racist behavior by fans and the setting off of fireworks at the game. UEFA's disciplinary body will judge the case on Tuesday.

Further rampages by Russian and English fans when they move to northern France for their next games could see one or both teams thrown out of the tournament. Euro 2016 disturbances haven't been restricted to Marseille, with clashes also erupting along the Mediterranean coast in Nice after trouble involving fans from Poland and Northern Ireland. At least 44 people were wounded in the clashes in Marseille and Nice, authorities said,

The location of Russia's next fixture poses another challenge for authorities as Lille is 30 kilometers (20 miles) from tiny Lens, where England plays Wales on Thursday. Lille also has a direct rail link to London so there could be a large number of fans from all four Group B nations converging on the city. Lille will initially be reinforced with an extra company of 80 riot police officers, Malizard said, on top of the 480 police officers and eight companies of riot police already planned for match days.

France's government vowed Sunday to expel foreign football hooligans, saying their violence during the European Championship is distracting police from the fight against terrorism. The Interior Ministry said in a statement that 116 people had been arrested since Friday in incidents connected to the tournament, with 63 of them still being held in prison and the rest released. Three people had been expelled from France and five others barred from entering France, the ministry said. France is hosting the 24-nation tournament while still in a state of emergency following terror attacks that killed 130 people in Paris in November.

Alcohol restrictions could apply on the eve and the days of matches, in public spaces, bars around stadiums and stores that sell alcohol for consumption off the premises. Local officials will be allowed to decide which areas would be dry.
RELATED TOPICS