Çakır doesn't give Ronaldo the time of day 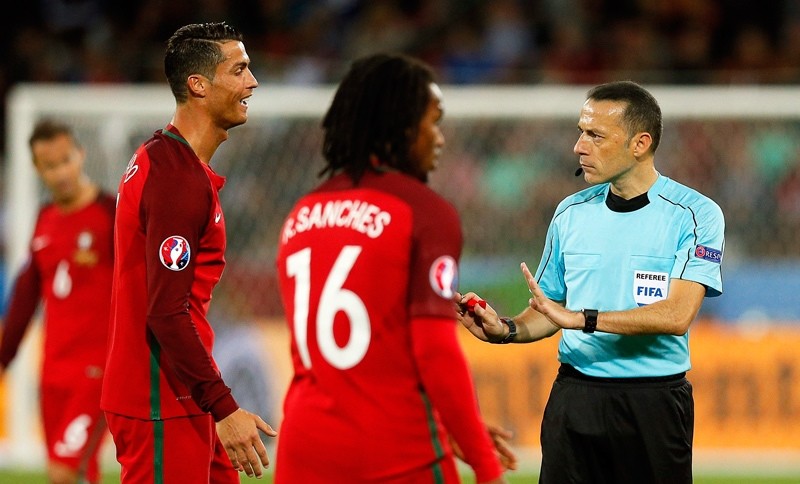 The Turkish referee who supervised the match between Iceland and Portugal was praised for his performance. His cool-headed attitude against Ronaldo's objections in the last minute went viral on social media

Cristiano Ronaldo's Portugal were upstaged by a team of Icelanders while Hungary beat Austria on a day of surprises at the European Championship on Tuesday. The smallest country ever to play at a European Championship, with its population of 330,000, over 7,000 fans or nearly two percent of the nation atteneded the game. Iceland made its major tournament debut in style with a 1-1 draw and the result made Ronaldo frustrated.

The match was supervised by Turkish referee Cüneyt Çakır, Turkey's most famous international referee who officiated the 2015 UEFA Champions League Final match between Juventus and Barcelona. Çakır attracted the attention of world football fans with his communication with footballers and cool-headed attitude in a rat-race match. In the last minute of the match, Çakır rewarded Portugal a free-kick.

While the ball was in the air, Çakır whistled and finished the match. Ronaldo objected to the decision and tugged Çakır's shirt. However, after Çakır's cool-headed attitude Ronaldo stopped objecting and walked into the tunnel smiling. Also, Çakır's fast sprint after Pepe kick an Icelandic rival player went viral on social media.

Ronaldo expressed his anger after the match. He slammed underdog Iceland for "parking the bus" in front of their goal. Real Madrid ace Ronaldo had 10 of Portugal's 24 shots on goal in Saint Etienne, but Ronaldo stormed off after the final whistle, clearly frustrated by his own failure in front of goal, while Iceland scored by converting one of only four chances.

"It was difficult over the 90 minutes, because they scored one goal and that was after they had put every player behind the ball," fumed Ronaldo.

"They put the bus in the net. Iceland didn't try anything, they just defend, defend, defend. It was a lucky night for them. We're frustrated, they didn't try and play. It's why I think they will do nothing here. In my opinion, it's a small mentality."

Iceland hit back at Ronaldo labeling him "not a gracious human being."

"He's a fantastic footballer, but he's not a gracious human being and the thing is we almost nicked the win, so him saying we weren't going for the win contradicts that," said midfielder Kari Arnason, who was on the receiving end of a four-goal Ronaldo haul in their last meeting when Real smashed his Malmo side 8-0 in December. And Arnason even claimed the humble attitude of Ronaldo's perennial rival for the crown of the world's best player, Lionel Messi, makes him more lovable than Ronaldo.

"Obviously we're not going to create as many chances as a fantastic team like Portugal, but his comments are the reason why Messi is always going to be one step ahead of him," he said. Ronaldo had 10 shots on goal, but stormed off the pitch at full-time in frustration as he was denied by Iceland's dogged defense and a great display from goalkeeper Hannes Halldorsson.

"He had a header in the final minutes of the game and a chance in the first-half, but otherwise I thought we had him under control," added Arnason.
Former Iceland international Hermann Hreidarsson branded Ronaldo a "sore loser," claiming he had been "beaten up" by Iceland's tireless hard work.

"He thought he could have goals handed to him on a plate," Hreidarsson, who made 89 international appearances, told the BBC.