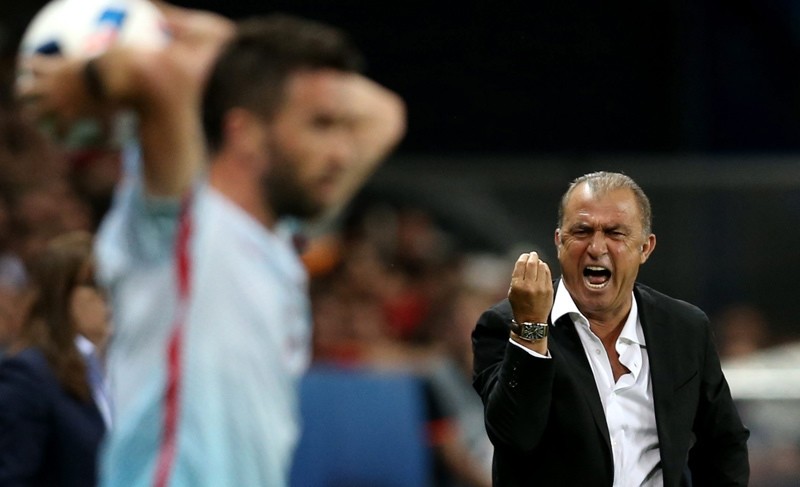 Turkey have lost their first two Euro 2016 games with under pressure coach Fatih Terim accusing his team of giving up. But victory against the Czech Republic on Tuesday means they will snatch third spot.

Fatih Terim is arguably the most famous Turkish football coach of all time.

He is on his third stint as Turkey coach but unless his players suddenly start performing in front of goal in Tuesday's final Euro 2016 Group D game against the Czech Republic, his tenure could come to an ignominious end.

Turkey finished a glorious third at the 2008 European Championship during his second spell in charge and hopes were high of at least getting out of the group this time given the talent at Terim's disposal such as Bayer Leverkusen midfielder Hakan Calhanoglu.

But despite decent link-up play in the 1-0 defeat to Croatia and the 3-0 reverse against champions Spain, they never really came close to scoring.

That must change on Tuesday or Turkey are going out. The Czechs have one point so only a win will do for Turkey, and even that might not be enough with only the four best third-placed teams making the last 16.

Terim, who won six Turkish league titles and the UEFA Cup in three stints at Galatasaray, was also one of very few Turkish managers to move abroad and coached both Fiorentina and AC Milan in Italy.

The 62-year-old does not want to possibly end his illustrious coaching career on such a downer in France and gave his players a rocket after the Spain loss.

"I saw a team that I don't like, one that gives up and just accepts defeat. Those who know my footballing and coaching career, my attitude and personality, will know that I have no business with those who just give up," he said.

"I can't come to terms with it and I apologise on behalf of myself and the team to everyone."

Turkey's players will no doubt have been on the receiving end of much more colourful statements in private from the well-known feisty character and the Czechs will expect fired up opponents in Lens.

Turkey actually played some nice football in the second half against already qualified Spain in Nice but by then it was too late and their finishing - especially from striker Burak Yilmaz - left much to be desired.

Turkish fans are nothing if not passionate and Terim said he now needs them more than ever.

"Please keep up that support for the match against the Czech Republic. Please don't think that I will accept results like this or any other day," he said after the Spain defeat.

The Czechs pulled off a last-gasp 2-2 draw against Croatia on Friday in the latest Euro game to feature a late goal but also the latest to feature crowd trouble.

The Croatian fans seemed to be at fault so the Czechs must just concentrate on their football.

A draw against Turkey would give them just two points, which probably would not be enough to get them into the knockout stages.

A win is therefore crucial for both sides, making the Lens encounter particularly intriguing. A handsome Czech victory, coupled with a defeat of Croatia by Spain, could mean they grab second spot and definite passage to the last 16.

Like Terim, Czech Republic midfielder Tomas Rosicky hopes the fans can make a difference after he was forced to gee them up before the late recovery against Croatia.

"You'll have noticed that I encouraged the fans during the match to show their commitment," said the captain, who has been ruled out of the tournament with a thigh injury.

"They were great. The team and my fellow players reacted well. Both the fans and ourselves had a good time – we felt the connection. We have to be very thankful for their support and their sheer numbers. We hope we'll have the same support for the Turkey game."