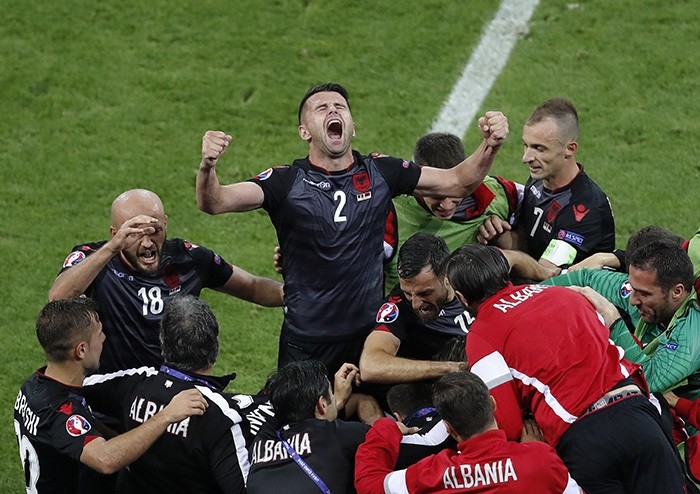 Albania's Andi Lila shouts raising his arms while celebrating his team's opening goal during the Euro 2016 Group A soccer match between Romania and Albania at the Grand Stade in Decines-Charpieu, near Lyon, France, Sunday, June 19, 2016. (AP Photo)
by Associated Press Jun 20, 2016 12:00 am

The players on Albania's national soccer team will be given diplomatic passports in recognition of their win over Romania at the European Championship.

Albania scored its first goal of the tournament and won its first match on Sunday, beating Romania 1-0 in the Group A match in Lyon. Armando Sadiku scored in the 43rd minute.

"They are ambassadors without passports, but the premier will supply (diplomatic) passports to them," Albanian soccer federation president Armand Duka said Monday.

Albania finished in third place in the group, but it will likely have to wait until Wednesday to see if its three points are enough to advance to the round of 16.

In Tirana and in neighboring Kosovo, where half the squad has its origins, fans erupted in joy with people in the streets waving red-and-black national flags. Firecrackers were lit, cars rang their horns for hours and people danced to folk music.

In a symbolic gesture, Albania's cash-strapped government made an urgent decision Monday to allocate a 1 million euro ($1.12 million) reward for the national squad.

"These unprecedented finals in our history would not be as such without the 12th player, the red-and-black fans that fascinated France with its citizenry," Prime Minister Edi Rama wrote on his Facebook page.

Albania coach Giovanni de Biasi, an Italian who has also received Albanian citizenship, broadcast a three-minute video showing Albania's hardships under the former communist regime, their difficult transitory post-communist period and also the Kosovo war which prompted NATO to intervene, saying "that's how we have been treated."

But he ended the video showing fans celebrating.

"This is what we are," De Biasi said. "Due to you, Europe considers us as equal. Thank you."