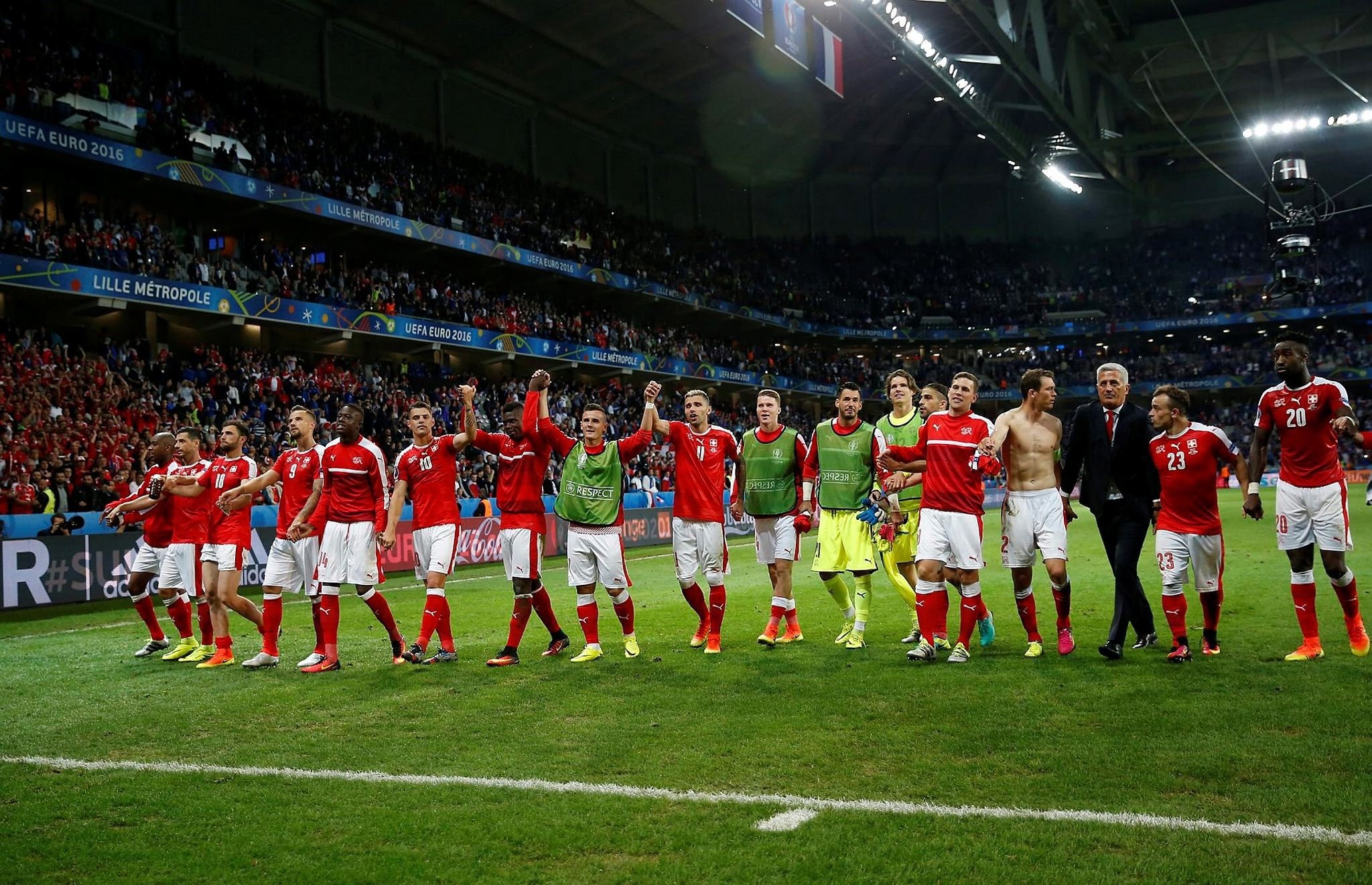 Players of Switzerland react after the UEFA EURO 2016 group A preliminary round match between Switzerland and France at Stade Pierre Mauroy in Lille Metropole, France, 19 June 2016. (EPA Photo)
by Jun 20, 2016 12:00 am

Switzerland qualified for the knockout stages of the European Championship for the first time and France went through as Group A winners after a lively 0-0 draw between the sides on Sunday.

France had the better of the chances with Paul Pogba going close twice in the first half while substitute Dimitri Payet almost continued his fine tournament but struck the bar with a first-time effort in the second period.

France top the group on seven points with the Swiss going through to the last 16 automatically after finishing second on five points.

France next meet a third-placed side from Groups C D or E in Lyon on Sunday in the first knock-out round while Switzerland will face the runners-up from Group C on Saturday in St. Etienne.

With France already through to the last 16 before kick-off, coach Didier Deschamps made five changes despite top spot not then being assured.


N'Golo Kante and Olivier Giroud were left out as they were on yellow cards while Payet was the big omission from the starting lineup, initially rested after a stunning tournament so far.


Switzerland coach Vladimir Petkovic, whose side have never beaten France in a competitive match and lost 5-2 to Deschamps' men in the group stage at the last World Cup, handed 19-year-old Basel striker Breel Embolo a start upfront with the misfiring Haris Seferovic dropped to the bench in the side's only change.


Home fans waved thousands of French flags during rousing renditions of the Marseillaise but the Swiss supporters made themselves seen and heard too.

The roof was kept open with the threat of rain having abated but the pitch was still not the best, with Pogba angry at slipping on several occasions.


The first opportunity fell to the Swiss after a miskick by Pogba was blocked by Switzerland's hapless Johan Djourou, possibly preventing his side from taking the lead with Hugo Lloris not certain to cover.


Pogba almost scored at the right end soon afterwards when the previously very reliable Yann Sommer spilled his stinging shot onto the top of the bar. Sommer then reverted to type to expertly divert a Pogba piledriver.

The start of the game was more enjoyable and open than France's previous encounters against defensively-minded Romania and Albania. Pogba was again in the action with another powerful effort rattling the top of the bar, all of this coming in the first 17 minutes.


The game slowed down from then on although three Switzerland players had their shirts ripped and the ball even popped, such was the ferociousness of some of the tackling.


France keeper Lloris, who tied the record for most France caps as captain with coach Deschamps in his 54th appearance with the armband, had little to do as Switzerland stretched the game but failed to create clear-cut chances.

Embolo was lively but without any end product and Seferovic was introduced in the second half.

Antoine Griezmann had an early opportunity in the second half for France but Sommer palmed his effort over the bar.

Payet then came on to a huge reception from the France fans inside Lille's Stade Pierre Mauroy and almost immediately added to his two goals already this tournament when hammering the bar. He fired wide with another fierce effort soon after.

A draw suited both sides and the game somewhat petered out, but few inside the ground cared.