Ibrahimovic to end international career in Sweden after Euro 2016 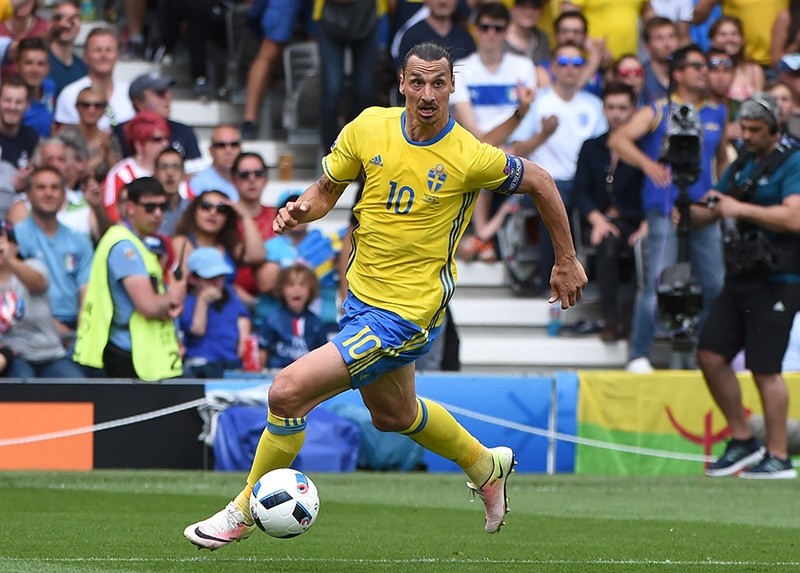 Sweden's forward Zlatan Ibrahimovic runs with the ball during the Euro 2016 group E football match between Italy and Sweden at the Stadium Municipal in Toulouse on June 17, 2016. (AFP Photo)
by Compiled from Wire Services Jun 21, 2016 12:00 am

Zlatan Ibrahimovic said Tuesday that he will retire from international football after the European Championship.

The 34-year-old striker said ahead of Sweden's final Group E game on Wednesday against Belgium that it would be his last for his country if the team gets eliminated.

"The last game for Sweden in Euro will be my last game with Sweden, so I hope it will not be tomorrow," he said. "Let's hope it goes as long as possible."

The match will be Ibrahimovic's last for Sweden if the national side - with one point from two games - fail to beat Belgium and end up crashing out.

"It will not be easy but we believe in ourselves. We still have a chance," he added. A win should guarantee progression to the last 16.

Even if Sweden loses and fails to qualify for the knockout stages, Ibrahimovic said he would not be disappointed with such an end to his international career.

"To finish on a disappointment, never, because I'm very proud to be captain of Sweden and what I achieved. So I want to take this moment and thank all the supporters, because they make it possible for me to achieve what I have achieved," he said. "For me disappointment doesn't exist, only proudness and grateful and very thankful."

He added that he "will not participate in the Olympics" in Rio de Janeiro. He had been named in a provisional Swedish squad.

Ibrahimovic is Sweden's record scorer with 62 goals and can become its joint sixth most-capped player with 116 appearances on Wednesday. Sweden, which has yet to score in the tournament, is likely to need a win against Belgium to qualify for the last 16 after an opening draw with Ireland and a defeat to Italy.

"Our greatest star going is a big loss," Sweden coach Erik Hamren said. "We have one international player that's really at the same level as Lionel Messi and Cristiano Ronaldo and that's Zlatan Ibrahimovic."

"I think Sweden do have a bright future in football, but of course if we lose Zlatan Ibrahimovic that will be a huge loss," Hamren said. "As a goalscorer of course but also as an individual he has really helped Swedish football."

Ibrahimovic is currently without a club after leaving Paris St Germain but media reports have said he is close to joining Manchester United.

But silverware on the international stage looks set to desert him with Sweden admitting themselves that he is their only true world class player.

Ibrahimovic is yet to score at this tournament but did force an own goal in the opening 1-1 draw with Ireland before the 1-0 defeat by Italy.