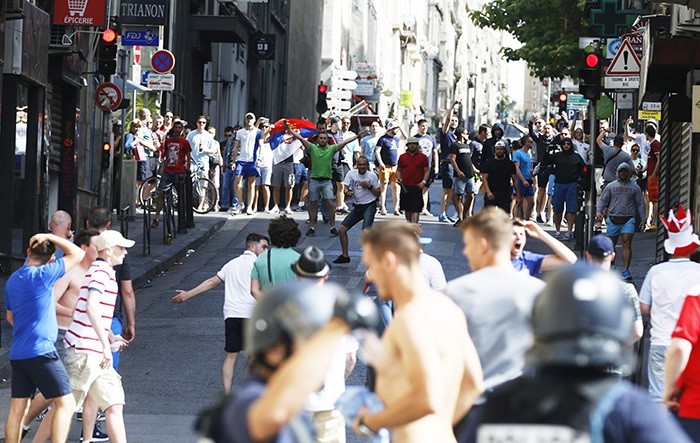 Russian fans (rear) face English supporters in a street at the Old Port of Marseille, France, 11 June 2016, before the UEFA EURO 2016 group B preliminary round match between England and Russia. (EPA Photo)
by Compiled from Wire Services Jun 21, 2016 12:00 am

The Russian football fans behind the Marseille fan violence were "trained fighters who kill", Ukrainian President Petro Poroshenko said during a visit to France on Tuesday.

"I cannot rule out that they were prepared. They were trained fighters who kill," Poroshenko told French television ahead of a meeting with his French counterpart Francois Hollande.

Two Britons remain in a coma in hospital after being seriously injured in the Marseille mayhem ahead of the June 11 Euro match.

They were among 35 mostly British fans hurt in the three days of violence.

French prosecutors said the Russian fans in Marseille had targeted England supporters in an orchestrated "hunt".

France on June 18 expelled a Russian far-right leader of a football supporters group, Alexander Shprygin, and 19 other fans after the troubles with England fans at Euro 2016.

Thirty-five people were injured in fighting between Russian and English fans around the England-Russia match in Marseille on June 11.

Russian President Vladimir Putin has described the violence as a "disgrace", but also said he could not understand "how 200 of our fans could beat up several thousand English".

Poroshenko said he hoped to head to Marseille later Tuesday to watch the Ukraine side take on Poland after it lost to Germany and Northern Ireland in its first two matches.

He said he hoped to "give a little hope to our team".

Russia is under EU economic sanctions for failing to make progress on resolving the conflict pitting pro-Moscow rebels against Kiev forces in eastern Ukraine.

Russia signed up to a ceasefire accord signed in February 2015 but it has yet to be fully implemented.