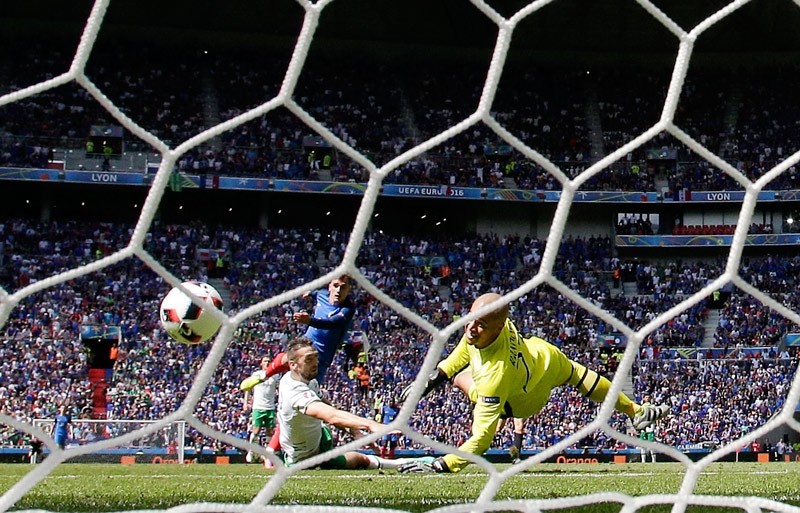 A second half double from Antoine Griezmann allowed France to survive a huge scare against 10-man Ireland and fight back to reach the quarter-finals of Euro 2016 thanks to a 2-1 win in Lyon Sunday.

Griezmann headed home a 58th minute equalizer to get a previously uninspired France back on level terms and then guided home the winner three minutes later. Ireland's Shane Duffy was red carded in 66 for hauling down Griezmann as he broke clear in search of his hat-trick.

Ireland had taken a second minute lead when Paul Pogba was deemed to have tripped Shane Long and Robbie Brady - whose late goal against Italy carried Ireland into the knock-out stage - converted from the spot.

France face the winner of Iceland v England in the quarter-finals in St Denis on Sunday.

A packed Stade de Lyon welcomed France onto the field with the handful of Ireland fans - a mere 5,000 in a capacity 56,000 crowd - stood out brightly in their block of green surrounded by blue.

And it was the minority who were celebrating after seconds when France failed to clear an attack down the left and Pogba brought down Long from behind as he chased a loose ball.

Referee Nicola Rizzoli pointed to the spot and after calm was restored, Brady found the net in emphatic style by firing in off the post with keeper Hugo Lloris going the wrong way. UEFA said the goal was the second-fastest at a Euro finals.

France responded immediately and brilliant work by Pogba, looking to atone for his error, produced a cross for Griezmann to head over.

But until the last minute of the half that was the only chance France created against the superbly marshalled Ireland defence. Finally Dimitri Payet had a sight of goal but, in a terrific scramble, he had two shots blocked before a third challenge denied Griezmann.

In between Ireland soaked up pressure and posed problems for the shaky France defence on the break when they could. Lloris produced the save of the half to tip away a clever hooked half-volley from Daryl Murphy.

Rizzoli flashed his yellow card to France pair N'Golo Kante and Adil Rami meaning they are ruled out of the quarter-final.

France coach Didier Deschamps introduced Kingsley Coman for Kante at the break and his fired-up side immediately created a chance as Laurent Koscielny headed wide from a set piece.

Ireland seemed to have weathered the storm and when France levelled it was out of the blue. They finally found a quality cross into the box from Bacary Sagna and Griezmann sent an unstoppable header past Randolph.

By the 61st minute France had turned the game completely as the Ireland defence flocked to Olivier Giroud who towered to win a header and set up Griezmann for a simple finish past Randolph.

Giroud again fed Griezmann to get behind the Ireland defence but with a hat-trick beckoning, he was denied on the edge of the box by a cynical foul from Duffy which saw him dismissed.

Andre-Pierre Gignac curled onto the bar and Randolph made a string of saves as France tried to make the game safe but with a man less Ireland were unable to threaten an equalizer.

And Randolph made one final save in injury-time to deny Griezmann his hat-trick again.