Germany's Mario Gomez to miss rest of Euro 2016 with injury 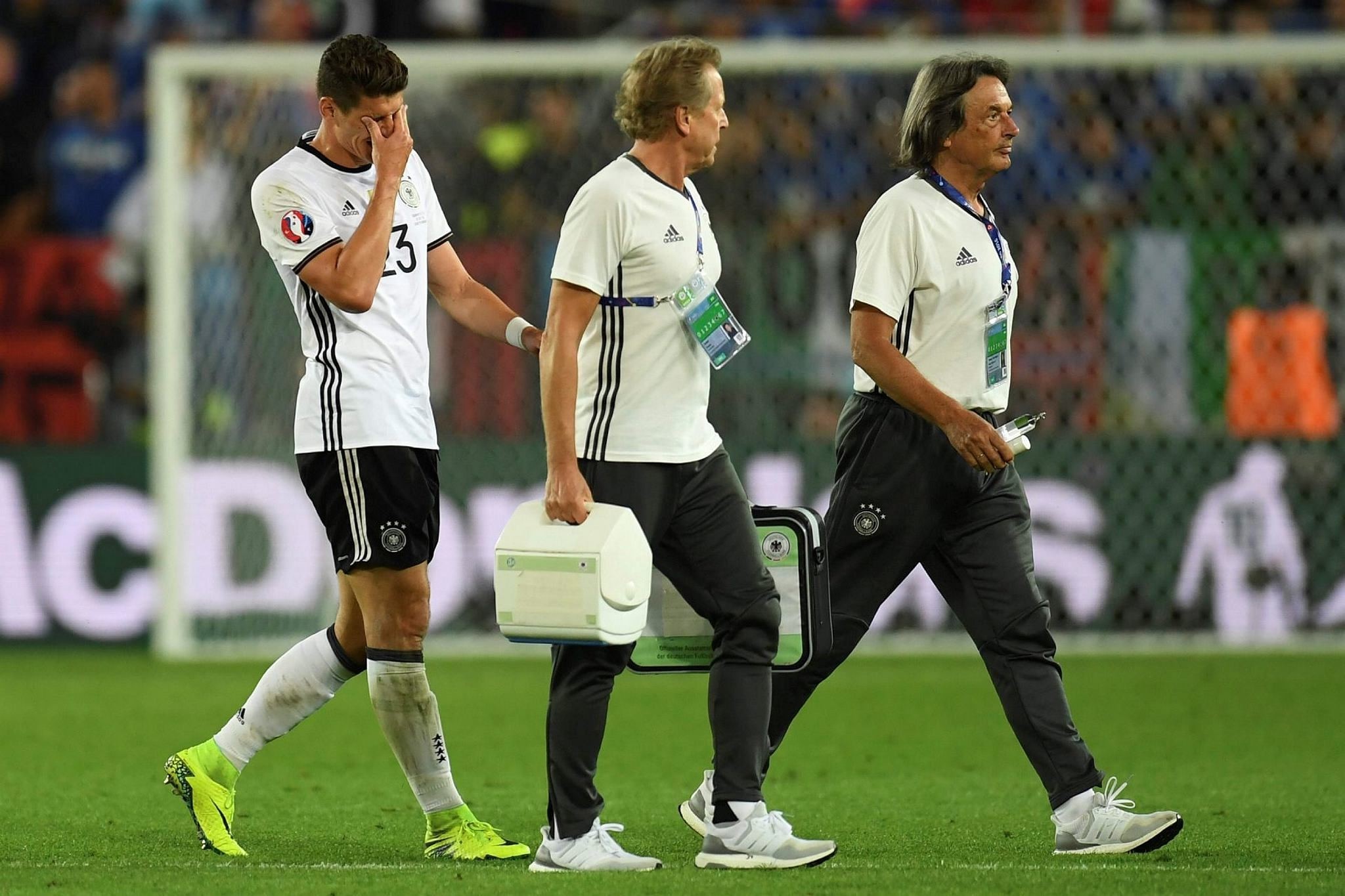 Germany's forward Mario Gomez (L) leaving the pitch during the Euro 2016 quarter-final football match between Germany and Italy at the Matmut Atlantique stadium in Bordeaux on July 2, 2016. (AFP Photo)
by Jul 03, 2016 12:00 am

Germany's Mario Gomez has been ruled out of the rest of Euro 2016 through injury while Sami Khedira and captain Bastian Schweinsteiger are doubts for Thursday's semi-final, the German Football Federation (DFB) said Sunday.

Gomez underwent a scan on Sunday that showed the striker suffered a torn thigh muscle in the quarter-final victory over Italy and he can play no further part in the tournament, the DFB said.

Juventus midfielder Khedira has a partially torn groin muscle and Manchester United's Schweinsteiger sprained a knee ligament in the penalty shootout win over the Italians on Saturday.

"It is currently in doubt whether Schweinsteiger and Khedira will be able to take any part on Thursday in Marseille or in a possible final in Saint Denis on Sunday," the DFB said in a statement.

Both are receiving intensive medical treatment.

"It's very bitter when important players are ruled out in the decisive phase of a tournament," said Germany's coach Joachim Loew.

"I am especially sorry for Mario.

"He put in some good performances at these Euros and has helped the team, not only with his goals.

"For us, it means we have to accept the new situation and find solutions, which we will do.

"The quality of the team is high and I have full trust in all the players -- we'll be ready on Thursday and we're looking forward to the semi-finals."

Loew has options to replace Gomez with World Cup-winning goalscorer Mario Goetze, who was left on the bench against Italy, while midfielder Thomas Mueller can also play as a striker.

Khedira and Schweinsteiger will be harder to replace should they fail to be fit for Thursday's semi.

Joshua Kimmich, who was deployed as a wing-back against Italy, can partner Real Madrid's Toni Kroos in midfield.

Should Loew's options be further depleted by injury, Borussia Dortmund's 20-year-old midfielder Julian Weigl is a promising talent for the future, but a risk at this level.

The world champions are already without defender Mats Hummels for the semi-final as he is suspended after picking up his second yellow card of the tournament against Italy.

Loew took a chance on Schweinsteiger at these European Championships finals as his skipper had not started a game since January and tore the medial ligament in his right knee in March.

He has been used off the bench in four of Germany's five games in France, but landed awkwardly after replacing Khedira in the first half against Italy.

The 31-year-old walked gingerly and rubbed his right knee immediately after the knock, but still finished the match, although he ballooned his spot-kick over the bar in the shootout.

Germany won 6-5 in the penalty shootout in Bordeaux on Saturday after the match finished 1-1 following extra-time.

They will play the winner of Sunday's quarter-final between France and surprise packages Iceland.

Cristiano Ronaldo's Portugal play Gareth Bale' Wales in the other semi-final on Wednesday.