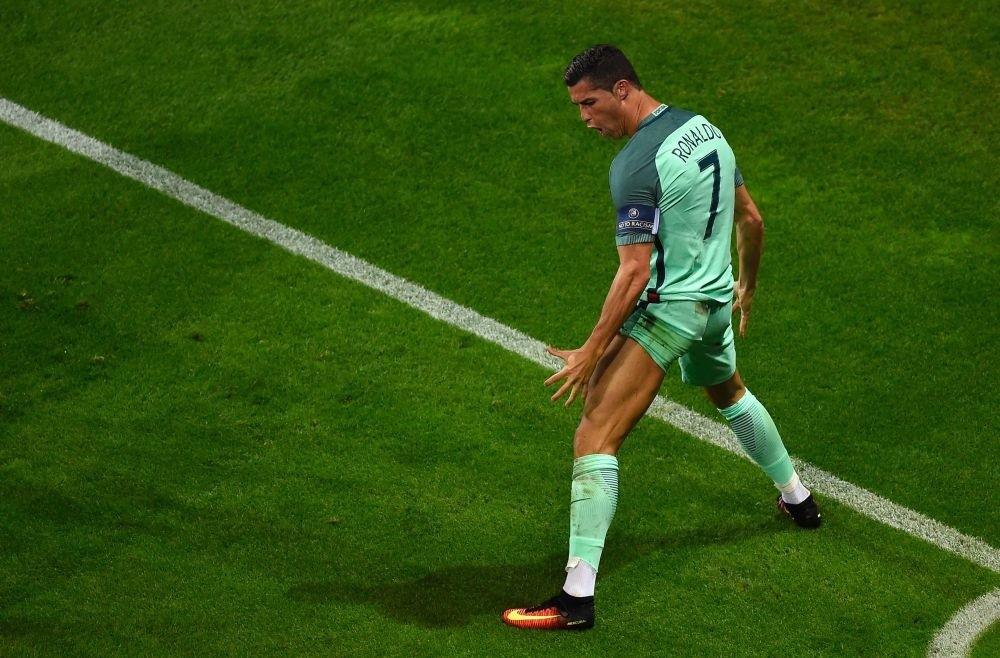 Like fellow underdog Iceland before it, Wales learned the hard lesson that a team needs more than just an abundance of guts and heart to succeed at the sharp end of a major tournament

Cristiano Ronaldo became the "Dragon-slayer" as his record-equalling ninth European Championship goal helped power Portugal past Real Madrid teammate Gareth Bales' Wales and into the Euro 2016 final. Gareth Bale, Wales' sole superstar and the world's most expensive player, tried as hard as he could but lost his European Championship semifinal battle against his Real Madrid teammate, Ronaldo.

Here are 5 things to know about the semifinal in Lyon:

Portugal's road to the final has been anything but convincing. Wales is the first team it beat in regular time. Having put itself two goals ahead, Portugal was able to control the second half against the Welsh. Wales manager Chris Coleman didn't have players coming off the bench who could make a difference. Unless Ronaldo can do something special, Portugal could get found out in the final, just as Wales was in the semifinal.

Had Bale carried Wales to its first ever major tournament final, having already won the Champions League again with Real Madrid this season, the 26-year-old could have become a real contender to break Lionel Messi and Ronaldo's stranglehold on the world player of the year award that they have hogged without interruption since Kaka won in 2007. As historic as getting Wales to the semifinal was, it surely won't be enough. Ronaldo could now have a lock on Ballon d'Or voters should he carry Portugal to victory in the final on Sunday.

Wales without midfielder Aaron Ramsey was like a car with a misfiring cylinder: It lacked oomph. Suspended from the semifinal for yellow cards in the previous rounds, the Arsenal midfielder's absence deprived the Welsh of their most prolific passer and goal-creator at Euro 2016. And it showed. Without his attacking runs and slinky passes from midfield, Wales struggled to capitalize on the absence through injury of Portugal's best defender, Real Madrid's Pepe, or place any lasting pressure on his 34-year-old replacement at center back, Bruno Alves. Andy King, Ramsey's replacement who plays for Premier League winners Leicester City, worked hard from box-to-box, taking turns with Liverpool's Joe Allen to drop back deep but also haring forward when opportunities presented themselves. But they were too few and far between.

Cometh the hour, cometh the three-time world player of the year. From the outset, Ronaldo looked determined to make his mark against Wales. His last - and only - major final with Portugal ended badly, with him in tears after the team lost to Greece at Euro 2004. He clearly wants a second chance. For a player of his stature, Ronaldo has had surprisingly few standout matches at his seven major tournaments with Portugal, including at Euro 2016. In the 2004 semifinals, he scored the opening goal against the Netherlands. At Euro 2012, he scored both goals in a 2-1 win again against the Netherlands to put Portugal in the quarterfinals and then scored the only goal in a 1-0 win against the Czech Republic to put Portugal in the semifinals. At Euro 2016 before tonight, he'd scored twice in a 3-3 group stage draw with Hungary.

Bale was guilty of trying too hard against Portugal. But that was also out of necessity. In trying to carve out goal-scoring opportunities and make things happen for Wales, the forward dropped back too often into midfield and that blunted some of his cutting edge. Had Wales had more players of his quality, Bale could have spent more time up front, waiting for crosses and passes like Ronaldo did. Instead, Bale tried doing a lot of the work himself. A trick obviously practiced by Wales on the training ground almost paid off in the 18th minute, when instead of hoofing a corner into the box, the ball was passed for Bale to run onto. But his shot was wide. Bale also repeatedly used his speed to test Portugal's defenses, notably outsprinting Ronaldo in the first half to fire a cross from the right wing that Andy King failed to reach.