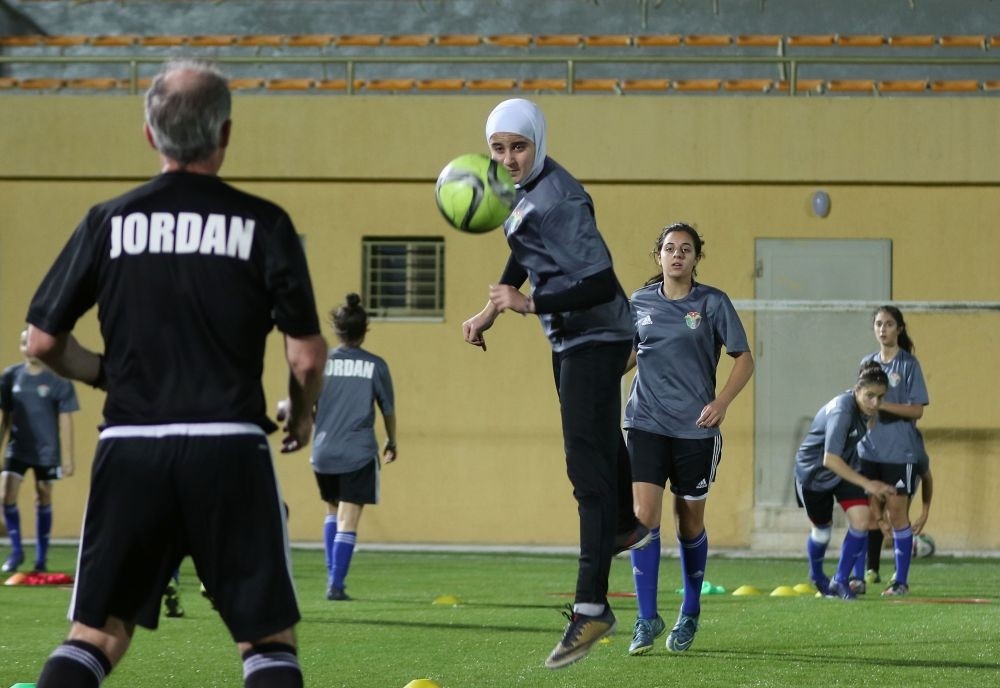 Members of Jordanu2019s womenu2019s under-17 national football team train in the capital Amman.
by Jul 15, 2016 12:00 am
Line's dream is about to become a reality, the 14-year-old Jordanian girl will make history later this year when she takes part in her first ever football world cup. FIFA's U-17 Women's World Cup will kick off on Sept. 30 in Jordan, the first time a Middle Eastern country hosts an international women's football competition. Line and 20 other girl footballers, including devout Muslims their heads covered by a scarf, have been practicing hard for the tournament with a British coach.

"Here in Jordan ... it was frowned upon to see a girl play football. But now things have changed," Line said.

She still remembers how she defied social conventions in the conservative kingdom when at a younger age she decided to join the boys of her neighborhood in a game of football.

For decades football was hands off for women but that changed in 2005 when the Jordanian federation - headed by Prince Ali, a half-brother of King Abdullah II - formed the first national female team. Ali, a vice president of FIFA who ran but failed to be elected president of football's world governing body, is credited with having helped Jordan's bid to host the under-17 girls' tournament. In May, FIFA said on its website that the first female Jordanian players who took to the pitch more than a decade ago "have impressed" and "did not disappoint."

British coach Robbie Johnson is confident that the under-17 girls team will shine at the upcoming world cup.

"This particular group are certainly keen to make a mark and certainly put the Middle East on the map," Johnson told Agence France-Presse (AFP) as he worked the girls on one practice night.

"It can be definitely the start of something to say to women, particularly in the Middle East or in the Gulf states as well: Look you can actually play and compete," he said.

Jordan now counts 720 registered women players, a small number in a country with a population of 6.6 million but still a "decisive step" for women's football, according to FIFA.
RELATED TOPICS