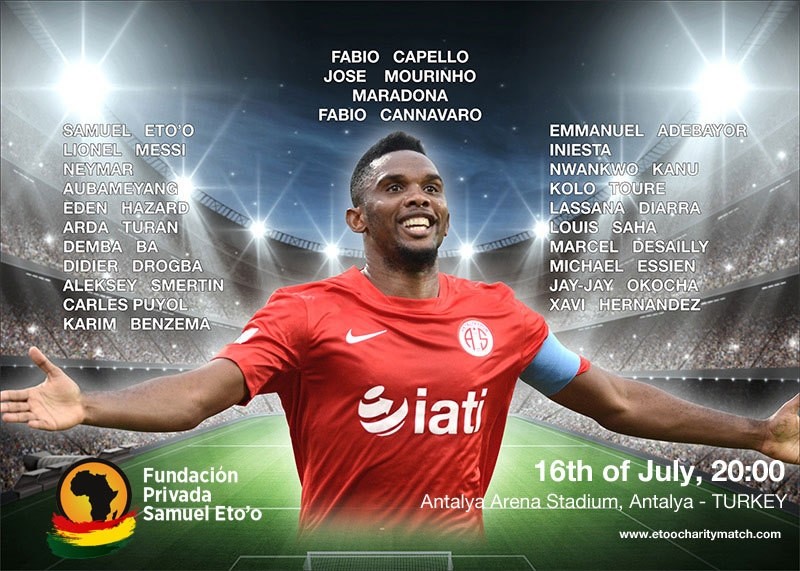 Antalya will play host to a friendly game to commemorate the 10th anniversary of the creation of the Samuel Eto'o Foundation, which develops different programs to help infants, particularly those in Western Africa

All of the funds raised from the match, organized by the World Tourism Forum, on July 16 will be donated to the Samuel Eto'o Foundation. A gala dinner will be held on the evening of July 15 at Regnum Carya for the event hosted by Samuel Eto'o and the megastars of world and Turkish football along with an elite community of guests will complete the scene at the gala. Among the Turkish celebrities are Orhan Gencebay, Hande Yener, Alişan, Kutsi, Altay, Cengiz Kurtoğlu and Hakan Altun. Regnum Carya also hosted the G-20 summit last year. There will be prominent names from the politics and business worlds at the event.

Cameroonian star Samuel Eto'o has been playing for Antalyaspor since the beginning of the 2015-16 season. Antalyaspor's President Gültekin Gencer said, "We will contribute to the promotion of Turkish tourism thanks to this organization. Our President Recep Tayyip Erdoğan and other government officials have supported us. The event will be broadcast by four TV channels around the world."

"The match, which will be played with the support of President Recep Tayyip Erdoğan and is expected to make a significant impact on Turkish tourism. About 33,000 people will view the match," a statement from the organizers added.

Eto'o once said he dreams of playing football with President Erdoğan who was also a former football player. The Cameroonian star said, "We will contribute to the promotion of Turkish tourism thanks to this organization. President Recep Tayyip Erdoğan and the other government officials have supported us."

It is expected that Erdoğan and Antalya Mayor Menders Türel will play against the stars in the match. The event is expected to attract at least 120,000 people to Antalya.

The Samuel Eto'o Private Foundation, established in March 2006, was created as a non-profit organization operating mainly in West Africa. The foundation strives to raise awareness of the needs of the African continent. Its goal is the protection of children and young people, providing emergency aid and encouraging education, basic health and social inclusion for the disadvantaged in order to help them create opportunities for the future, according to its website.
RELATED TOPICS