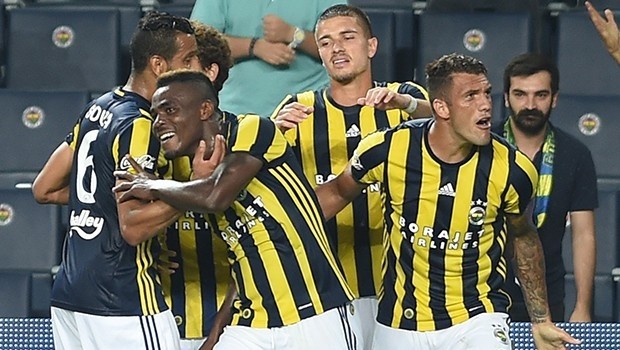 Fenerbahçe gained the upper hand over Monaco after a 2-1 won in the UEFA Champions League qualifiers on Wednesday evening in Istanbul. Fener's Nigerian forward Emmanuel Emenike (L)shone in the game with two goals while Monaco's Colombian star Radamel Falcao scored his team's only goal.

Emenike's goal in the 39th minute put the Yellow Canaries ahead but Falcao responded with a goal three minutes later, wrapping up the first half in a draw despite the efforts of Nabil Dirar, who almost scored in the 49th minute with a long-range drive.

Emenike secured victory for Fenerbahçe with another goal in the 61st minute thanks to a fine pass from Gregory van der Wiel.

The two teams will compete in the second leg in Monaco on Aug. 3 and Fener will qualify for the next round of the play-offs if they win the rematch or secure a draw. Conceding at home could make life hard for Monaco as they try to qualify for the Champions League.

Emmanuel Emenike, who spent most of the season on loan at other teams last year, made his comeback in the Monaco match, scoring his first goals in more than a year for Fenerbahçe.

Another highlight of the match was the fans' overwhelming support for goalkeeper Ertuğrul Taşkıran despite his error that led to the Monaco goal. Fans chanted Taşkıran's name throughout the match.

It is the first official match for Fenerbahçe in the 2016-2017 season as the domestic leagues remain on holiday and the team looks to keep its standards high against Monaco, who, despite a poor streak in international competitions, stay strong in France's Ligue 1. Fener came into the game off the back of strong form at the end of the last Super League season, securing second spot.