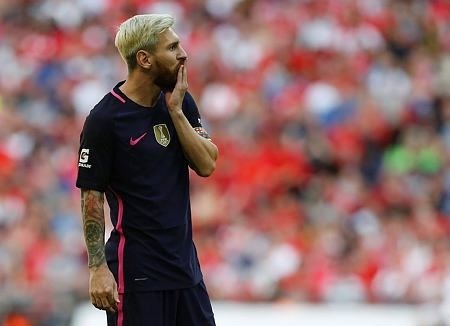 Lionel Messi announced on Friday that he wants to return to play for the national team, reversing his decision to retire earlier this year.

The 29-year-old Barcelona superstar abruptly announced his international retirement in tears after Argentina lost the Copa America final to Chile on June 26.

"A lot of things went through my mind on the night of the final and I gave serious thought to quitting, but my love for my country and this shirt is too great," he said on Friday in a statement released by his management company.

His earlier vow to quit had dismayed Argentina's demanding football fans, many of whom held street rallies and posted online messages begging him not to go.

Argentina's new coach was set to announce later whether Messi would rejoin the squad for looming World Cup qualifiers.

National coach Edgardo Bauza met with Messi in Barcelona this week hoping to convince him to rejoin the squad.

Bauza was due to announce his list of players for games against Uruguay on September 1 and Venezuela on September 6. A news conference was scheduled for the announcement at 2100 GMT Friday.

"I sense that Messi wants" to rejoin the squad, Bauza told reporters on arriving back in Buenos Aires on Friday.

"I have no doubt that he wants to rejoin the national team... I will talk to him today and finish my list."

Bauza took over the job from Gerardo Martino and was tasked with turning things around ahead of the 2018 World Cup, amid a management crisis at the Argentine Football Association.

"There are a lot of issues that need to be resolved in Argentine football, but I prefer to help from within and not to criticize from the outside," Messi's statement said.

"I send my thanks to all of those who want me to continue playing for Argentina. I hope that we'll be able to give them something to cheer about soon."