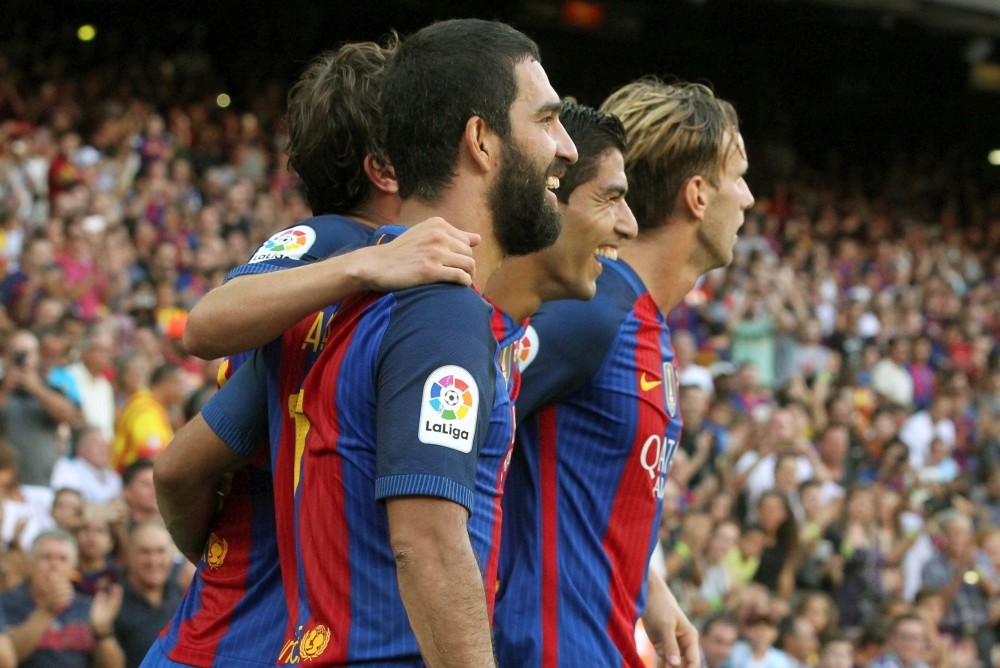 by Daily Sabah with AP Aug 22, 2016 12:00 am
After he scored against Sevilla on Wednesday to win the Spanish Super Cup for the 12th time in Barcelona's history, Arda Turan also starred against Real Betis in La Liga match, boosting his confidence after a tricky start to life in Catalonia. While Barcelona thump Betis 6-2 on Saturday, Turan put his team ahead before Betis striker Ruben Castro equalized with the first of two goals. Turan continued to make the most of Neymar's Olympic duty for Brazil by scoring his third goal in as many matches. Turan scored twice to help win the Spanish Super Cup this week, and has meshed well with Messi and Suarez up front.

"Turan is talented and can play both as midfielder and forward, and now, on top of that, he is scoring goals," Barcelona coach Luis Enrique said. "He is more integrated and happy."

Luis Suarez scored a hat trick and Lionel Messi added two more goals as Barcelona started its Spanish league title defense. Suarez, who led scoring in La Liga with 40 goals last season, helped to put the result beyond doubt before halftime and struck twice afterward to complete the demolition. Even better for the Catalan club, Messi destroyed any hopes of title rivals that a difficult summer could have affected his game. Messi was found guilty in June of tax fraud in Spain - he is appealing - and lost another Copa America final with Argentina. But he was his normal brilliant self at Camp Nou. "(Messi) is incredible. He is the best player in the world," Suarez said. "You have to enjoy playing with a player like that." For Suarez, the six-goal performance against Betis was a message that Barcelona is still the team to beat. "Barca is always the favorite," Suarez said. "Today's game was to show why we have been the champion in recent seasons." Before kickoff, Messi and Andres Iniesta received the trophy for last season's title.
RELATED TOPICS