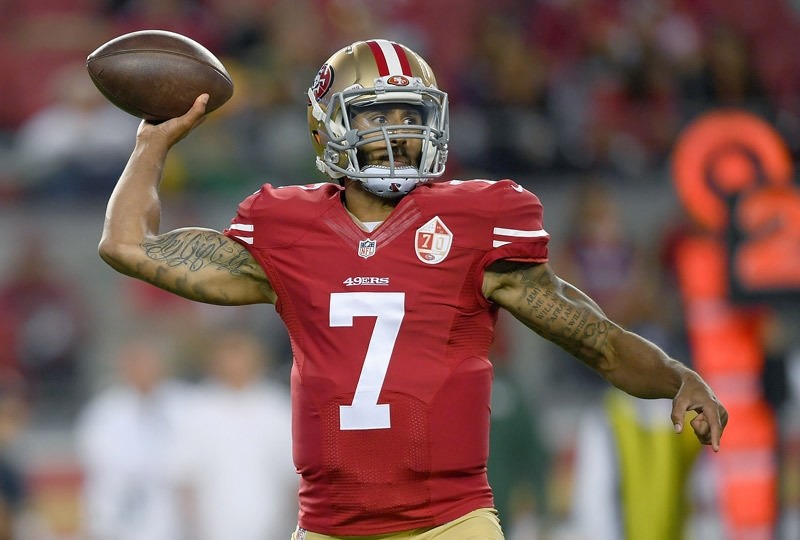 Quarterback Colin Kaepernick of the San Francisco 49ers throws a pass against the Green Bay Packers in the first half of their preseason football game at Levi's Stadium on August 26, 2016 in Santa Clara, California. | AFP Photo
by Anadolu Agency Aug 28, 2016 12:00 am

The National Football League (NFL) on Saturday issued a short statement on Colin Kaepernick's refusal to stand for the national anthem before a pre-season game the night before.

"Players are encouraged but not required to stand during the playing of the national anthem," it said in an apparent attempt to avoid creating yet another public relations fiasco for a league that has been dogged by inconsistences in doling out punishment to players.

It was the third time during the pre-season Kaepernick has sat for the playing of the anthem to protest racial injustice. The two previous times went largely unnoticed because the star quarterback for the San Francisco 49ers was not dressed and did not play.

"I am not going to stand up to show pride in a flag for a country that oppresses black people and people of color," he told NFL Media following the loss to the Green Bay Packers on Friday night.

"To me, this is bigger than football and it would be selfish on my part to look the other way," the 28-year-old said. "There are bodies in the street and people getting paid leave and getting away with murder."

The team also weighed in on the controversy, describing the national anthem as a "special part of the pre-game ceremony" and saying it "recognize the right of an individual to choose and participate, or not, in our celebration" of the anthem.

Reaction from fellow players has been mixed.

"It blows my mind how many people hate the country they live in," free agent quarterback T.J. Yates said on Twitter.

And from linebacker Emmanuel Acho: "Not condoning it, but You'll be hard pressed to find an African American that chastises ‪@Kaepernick7 for his actions."

The NFL has attempted to repair its image in recent years following high-profile controversies including domestic abuse by players and what many consider an unwillingness to admit the severity of concussions.

The league's reaction stands in stark contrast to that of the NBA that indefinitely suspended a star guard 20 years ago for refusing to stand for the Star-Spangled Banner.

During his sixth season with Denver Nuggets, Mahmoud Abdul-Rauf found himself in controversy after his repeated absence during the playing of the national anthem drew public attention.

Abdul-Rauf, who is a Muslim, explained that he viewed the American flag as a symbol of "tyranny" and "oppression".

The explanation was met with a huge backlash and resulted in him being traded to another team and his eventual exit from the league two years later.