Turkey's coach Terim: There is no luck in football 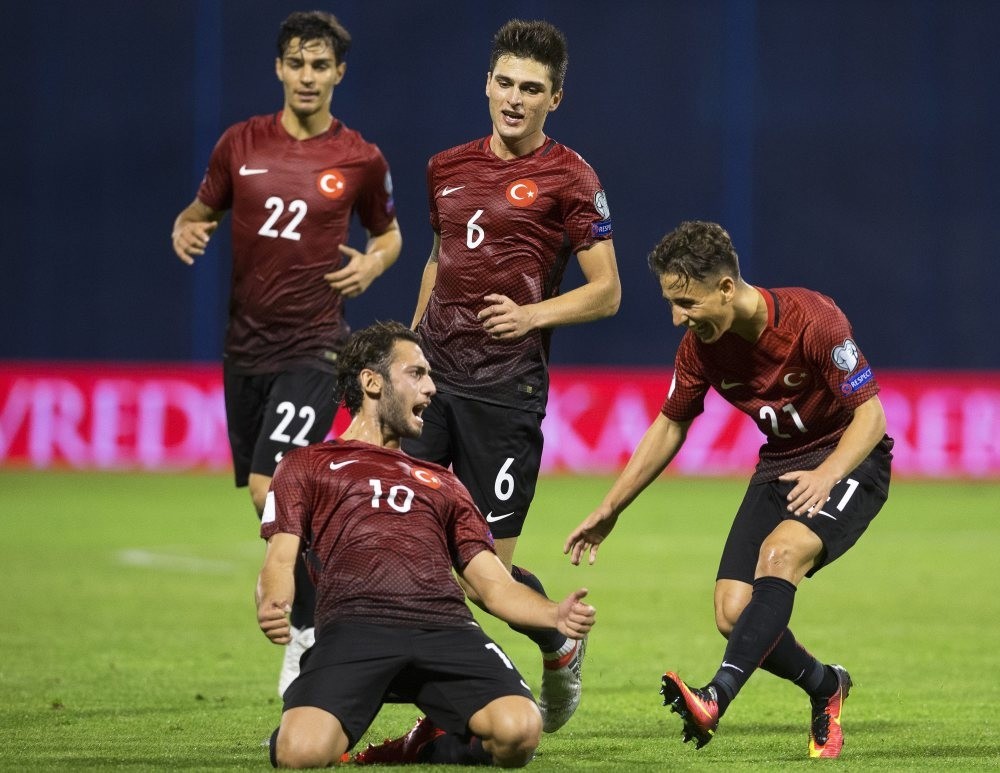 Hakan u00c7alhanou011flu (front L) celebrates with his teammates after scoring the 1-1 equalizer during the FIFA World Cup 2018 qualifying match between Croatia and Turkey in Zagreb.
by Daily Sabah with Wires Sep 07, 2016 12:00 am

Turkey snatched a precious point against Croatia at the start of 2018 World Cup qualifying in European Group I as the two nations renewed their rivalry with an entertaining 1-1 draw in an empty Maksimir stadium on Monday. Barcelona's Ivan Rakitic gave Croatia a 1-0 lead from a 44th minute penalty after Modric drew a foul. But, Turkey equalized with Hakan Çalhanoğlu's free kick from 25 meters, which was the last kick of the first half in extra time. Croatia coach Ante Cacic alleged that Turkey won a point with "pure luck." Cacic said, "We expected a difficult match, it is not easy to play in such conditions. We were much closer to a victory than Turkey."

Cacic's words irritated Terim although they got along well during the match. Terim said, "I want to congratulate my players. They played a very important match. I had said before the match that my players would play at a very high tempo. I am content with their performance. Croatia are the favorites in Group I. So it is very important to get a point in such a difficult away match"

Criticizing the penalty decision, Terim said, "Corluka played with his hands before the penalty decision. But it was good for us to find the goal before the end of the first half. Our team ran 112 kilometers today. I'm also content with the other matches in the group ending 1-1. If we are able to get a good result in the match against Iceland, our chances will increase."

Croatia captain and Real Madrid midfield star Modric regretted being held 1-1 by Turkey, saying, "We were much better as a team and we created much more chances ... No one is to blame but ourselves," Modric told state-run HRT television after the match. He said it was a "rather good match in such an environment.

"It is difficult ... These are not football conditions, it was more like a training session," the 30-year-old added.

Croatia pressed forward relentlessly after the break but the Turks, who famously knocked Croatia out on penalties in the Euro 2008 quarter-finals, held on thanks to resolute defending and some saves by keeper Volkan Babacan. The two other World Cup qualifier matches in Group I between Finland and Kosovo as well as Ukraine and Iceland each ended in 1-1 draw.All six teams in Group I each have one point. The next stage of Group I qualifying matches will be played on Oct. 6. Turkey will host Ukraine, Kosovo will host Croatia and Iceland will host Finland.

Elsewhere, Spain, Italy and Euro 2016 semi-finalists Wales began their World Cup campaigns with victories. Italy had defender Giorgio Chiellini sent off as they were made to fight for a 3-1 win over Israel in Haifa, while Group G rivals Spain ran out 8-0 winners over Liechtenstein in Leon with two goals each for Diego Costa, David Silva and Alvaro Morata. Gareth Bale meanwhile scored twice as Wales trounced Moldova 4-0 in Cardiff in a Group D game.Group rivals Austria began with a 2-1 victory over Georgia in Tbilisi. Martin Hinteregger and Marc Janko put Marcel Koller's side ahead at the break before Jano Ananidze pulled one back 12 minutes from time. Serbia and Ireland meanwhile shared the spoils in the group in a 2-2 draw in Belgrade. The Group G match between Albania and Macedonia was abandoned at 1-1 in the 79th minute after a storm.
RELATED TOPICS