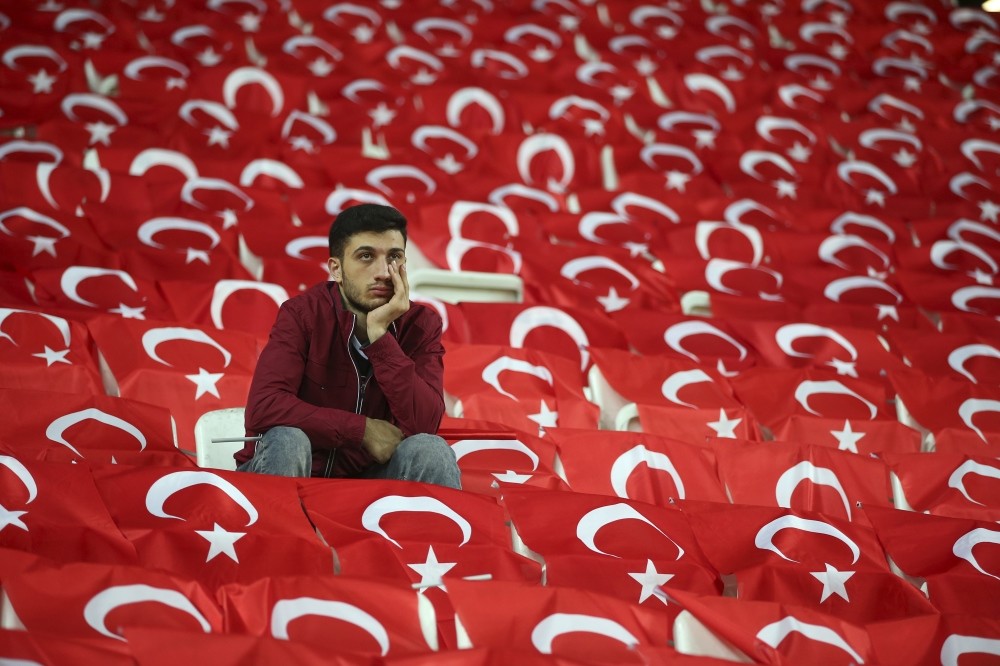 After Turkey and Ukraine played to a 2-2 draw in a 2018 World Cup qualifying match, Turkey coach Fatih Terim attributed the point lost at home to stress on his team, and referred to having left out star players such as Arda Turan and Burak Yılmaz

Fatih Terim, who has achieved many successes in his coaching career, is now eyeing taking Turkey to a World Cup for the first time under his supervision. However, Turkey lost a very critical two points at home against Ukraine on the road to the 2018 World Cup. The team clawed their way back from two goals down to salvage a 2-2 draw at home to Ukraine with a late penalty from Hakan Çalhanoğlu in their Group I World Cup qualifier on Thursday. Andriy Yarmolenko put the visitors ahead in the 24th minute with a penalty after Ömer Toprak brought down Artem Kravets and two minutes later Kravets doubled their lead when he was played in by Yarmolenko after springing the offside trap. Ozan Tufan pulled a goal back for the hosts just before the break with a header in a crowded area from a corner by Çalhanoğlu, who equalized in the 81st minute with a penalty after Taras Stepanenko pulled Cenk Tosun's shirt.

Turkey coach Terim controversially left Barcelona's in-form midfielder Turan, Yılmaz of Beijing Guoan and Galatasaray's Selçuk İnan out of his squad after the country's poor Euro 2016 campaign when they went out at the group stage.

While Terim's risky decision created a stir in Turkish public opinion, the Turkish coach said after the match, "We could not save our players from a stressful environment," in a statement that could be seen as being related to the discussions on snubbing star players.

"After the match ended, I met with my team. I don't like to excuse myself but -- no matter we tried hard -- our footballers are affected by something. If I had played, I would have been affected too. If we evaluate the first half, I've never such a team in bad shape. We tried to prevent the weakness in midfield in the second half. We could have won 3-2. I congratulate my players for coming back from 2-0 behind to draw 2-2."

Emre Mor, Turkey's new talent, attacked the German referee Manuel Grafe, saying: "The referee was very bad and he did not give a penalty decision after the foul against me. We struggled hard after a 2-0 defeat. We played better after we scored the first goal. The Ukrainian players played very aggressive and harshly. They gave me harsh fouls."

Ukraine coach Andriy Shevchenko said: "Emre Mor is a very fast and good player. It is very difficult to stop him. Turkey played good attacking football. We were supposed to stop it. But our players got tired."

Elsewhere, Mario Mandzukic struck a first half hat trick for Croatia to hand Kosovo's 2018 World Cup qualifying campaign a bitter setback on Thursday. The team from the tiny Balkan nation earned a creditable 1-1 draw in Finland last month in its competitive international debut and was looking to spring another surprise against favorite Croatia. But Croatia and Mandzukic had different ideas, and won 6-0. It was the first competitive home game for Kosovo but was played in Albania's northern city of Shkodra, as Kosovo has no stadium certified by UEFA. Kosovo became a UEFA member in May, joined FIFA a week later, and was fast-tracked into World Cup qualifying though many nations still have not recognized it. Proving the sensitivity of the move, Croat fans started chanting in Serbo-Croatian "Kill, kill the Serbs" in the second half, and they were echoed and followed by Kosovo fans, too, in Albanian.

Croatia was without star midfielders Ivan Rakitic and Luka Modric but had another star available; Mandzukic ruthlessly exploited Kosovo's inexperience.

In another Group I match, Iceland rallied in the final minutes to earn its first victory in qualifying. Alfred Finnbogason leveled the score in the final minute of the match, and Ragnar Sigurdsson scored the winner deep into stoppage time for the surprise Euro 2016 quarterfinalist. Gylfi Sigurdsson wasted a golden opportunity to tie it at 2-2 from the spot earlier in the second. Finland, which is also seeking its first World Cup appearance, took a 2-1 lead with goals from Teemu Pukki and Robin Lod. Kari Arnason scored for Iceland in the first half. Turkey and Ukraine both have two points from two games, behind Croatia and Iceland, who have four. The next stage of Group I qualifying matches will be played Oct. 9. Iceland will host Turkey, Ukraine will face off against Kosovo and Finland will take on Croatia.
RELATED TOPICS