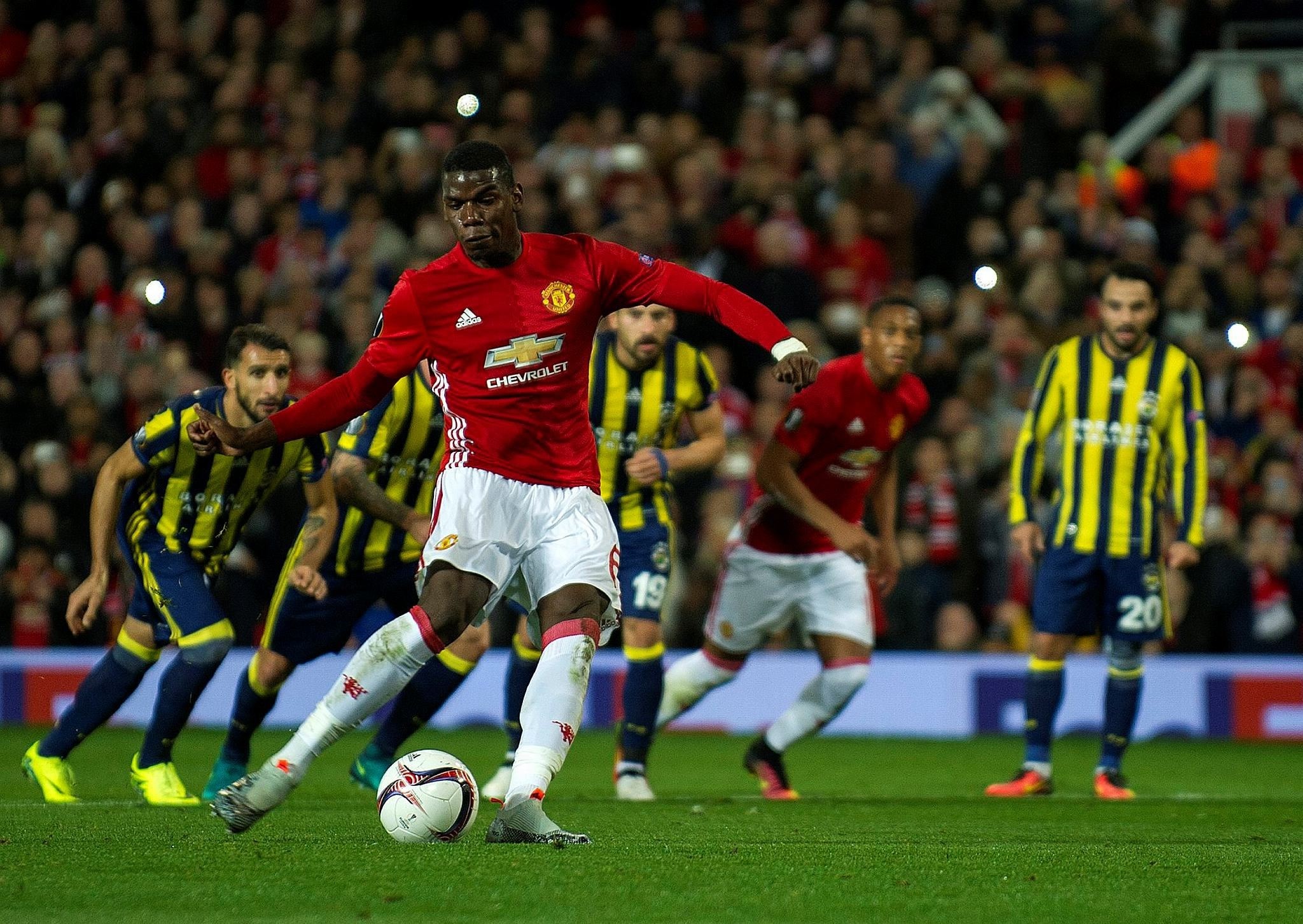 Manchester United's Paul Pogba scores the opening goal during the UEFA Europa League group A match between Manchester United and Fenerbahce. (Reuters Photo)
by Oct 21, 2016 12:00 am

France midfielder Pogba scored a penalty and curled in from distance to take his tally to three goals since his world-record 89 million pounds ($109.1 million, 100 million euros) return from Juventus.

Anthony Martial, with another penalty, and Jesse Lingard were also on target as Jose Mourinho's team secured a win that left them level on six points with Feyenoord at the top of Group A.

Fenerbahçe replied late on through United old boy Robin van Persie, who tucked in a cross from substitute Emanuel Emenike and was rewarded with applause from all four corners of Old Trafford.

The result vindicated Mourinho's decision to make seven changes to the team that had held in-form Liverpool to a 0-0 draw on Monday.

The likes of Zlatan Ibrahimovic, Ander Herrera and Marcus Rashford are likely to return for Sunday's Premier League trip to Chelsea, after which United host Manchester City in the League Cup.

The joint-biggest win of the nascent Mourinho era was witnessed by ex-England manager Sam Allardyce, who attended as a guest of Alex Ferguson in his first public appearance since his much-publicised departure.

Dropped for United's last three games, captain Wayne Rooney returned up front to face the team against whom he scored a memorable debut hat-trick in a 6-2 Champions League win in September 2004.

With Juan Mata prominent in the number 10 role, United's build-up play was neat, but they showed next to no threat until they were awarded a 31st-minute penalty.

Michael Carrick's raking pass was beautifully brought down by Mata, who was brought down in turn by a clumsy challenge from the stumbling Simon Kjaer.

Referee Benoit Bastien thrust his hand towards the penalty spot and after an almost comical tip-toed run-up, Pogba tucked away a low shot to goalkeeper Volkan Demirel's right.

The home fans had called for Rooney to take the spot-kick and when Bastien awarded United a second penalty three minutes later, they were disappointed again.

Mata's exquisite, fizzing pass freed Martial, who was caught from behind by Sener Ozbayrakli, and the Frenchman picked himself up to deliver the sentence in person.

Brazilian midfielder Souza had an immediate chance to reduce the arrears, but after cutting inside the sliding Eric Bailly, he saw his shot blocked at the near post by David de Gea.

The game was up in first-half stoppage time as Pogba strode onto Lingard's lay-off to curl a glorious first-time shot into the top-left corner from outside the box.

Mourinho raised his finger to the sky and walked straight down the touchline to the tunnel.

Within three minutes of kick-off in the second half, United were four goals to the good as Rooney laid off Pogba's pass to Lingard, who drove a crisp shot past Demirel from 20 yards.

Fenerbahçe inflicted United's first ever home defeat in European competition, a 1-0 loss in October 1996, but the only thing for their fans to shout about here was Van Persie's 83rd-minute consolation.