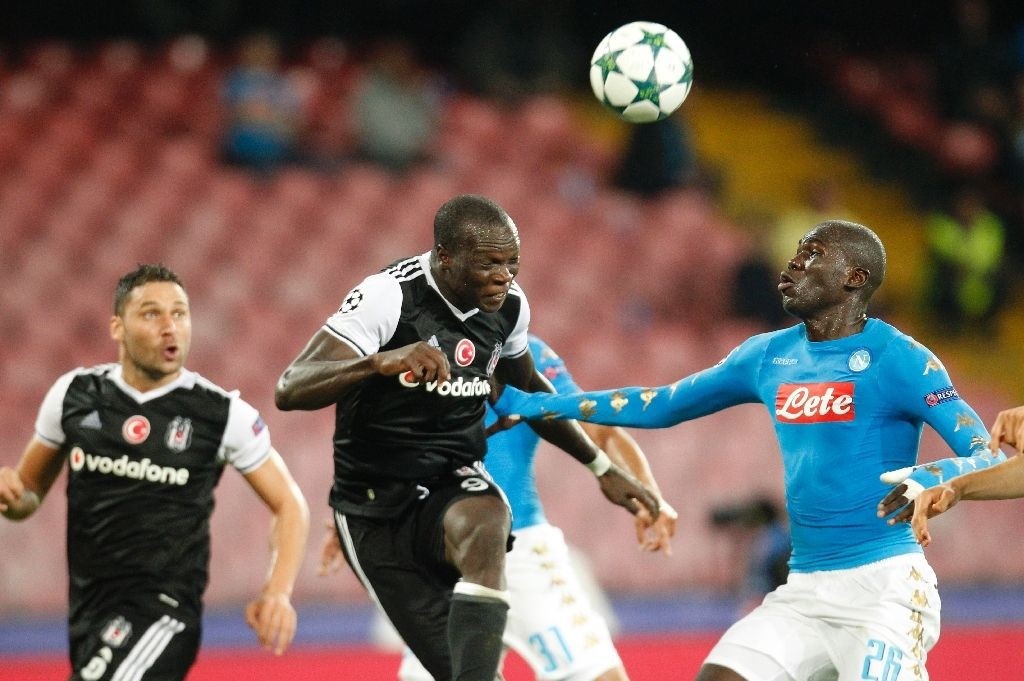 The Black Eagles moved to within a point of Napoli with their stunning victory on matchday three and, back on home soil, will be striving for another win to go on top of Group B in the coveted UEFA Champions League

Beşiktaş's stunning victory at Napoli, who had won both their opening fixtures, has put the Turkish side within a point of the Group B leaders. In the first competitive meeting between the teams, Beşiktaş twice let the lead slip before Vincent Aboubakar struck a late winner, his second goal of the game, to secure a 3-2 victory. Adriano Correia Claro had opened the scoring in the 12th minute for Beşiktaş but Napoli's Dries Mertens scored in the 30th minute to equalize. A Manolo Gabbiadini penalty in the 69th minute, with Lorenzo Insigne having earlier missed from the spot, kept Napoli in the hunt before Aboubakar gave the Turkish Super League champions their first victory over Italian rivals in 12 tries.

A 1-1 draw at S.L. Benfica on matchday one came courtesy of a player from the Lisbon club, Anderson Talisca, loaned to Beşiktaş in August, as he struck a last-gasp equalizer. They were then involved in another 1-1 draw when Dynamo Kyiv pulled level in the 65th minute to cancel out Ricardo Quaresma's free-kick goal in the first half. Back in the UEFA Champions League for the first time since 2009/10, the Turkish Super League champions are hoping to negotiate the group stage hurdle for the first time in six attempts. In that 2009 campaign they lost all three home fixtures and finished at the bottom of the section. They have won one of their last five home games in UEFA competition, and are on a four-game winless home run in the UEFA Champions League proper. Before winning in Naples, Beşiktaş had drawn two and lost nine of their past 11 meetings with opponents from Serie A.

As for the match facts:

Beşiktaş's star Gökhan İnler played for and captained Napoli between 2011 and 2015, helping the Partenopei to win the Coppa Italia twice and the Italian Super Cup once. İnler played for Udinese Calcio for four seasons before that and on April 17, 2011 scored the opening goal in their 2-1 win over Napoli in Serie A. Ricardo Quaresma scored the second goal in F.C. Porto's 2-2 away draw with Beşiktaş in the 2013/14 UEFA Europa League Round of 16 to earn a 3-2 aggregate win. Quaresma was at F.C. Internazionale Milano from 2008 to 2010, making 24 Serie A appearances. Caner Erkin is on loan from Inter after joining the Nerazzurri this summer from Fenerbahçe. Beşiktaş coach Şenol Güneş was in charge of Turkey for the 1-1 friendly draw with Italy in Pescara on 20 November 2002. Quaresma scored an extra-time winner as Portugal defeated Ivan Strinic's Croatia in the UEFA EURO 2016 Round of 16 in Lens.

Adriano and Caner are each one booking away from a match ban. Beşiktaş are unbeaten in 13 games in regulation time in 2016/17 (W7 D6), though they did lose the Turkish Super Cup 3-0 in penalties to Galatasaray in August. Beşiktaş have won four of their last five matches in all competitions, keeping three clean sheets. The Black Eagles have won 13 of their past 14 home league fixtures. Oğuzhan Özyakup has not played since sustaining an ankle injury against Galatasaray in late September, although he is back in full training. Caner will be out for six months after tearing his left Achilles tendon in a 3-0 defeat of Antalyaspor on October 23. Talisca underwent surgery on Saturday after breaking a metatarsal bone in Friday's game against Gençlerbirliği, having earlier scored in a 1-1 draw. Necip Uysal went off after 14 minutes with a hamstring injury. İnler missed the Antalyaspor match due to an undisclosed injury and was not part of the squad which travelled to Gençlerbirliği.

Napoli ended a run of three consecutive defeats in all competitions by winning 2-1 at Crotone on October 23, despite Gabbiadini being sent off after only half an hour.
RELATED TOPICS