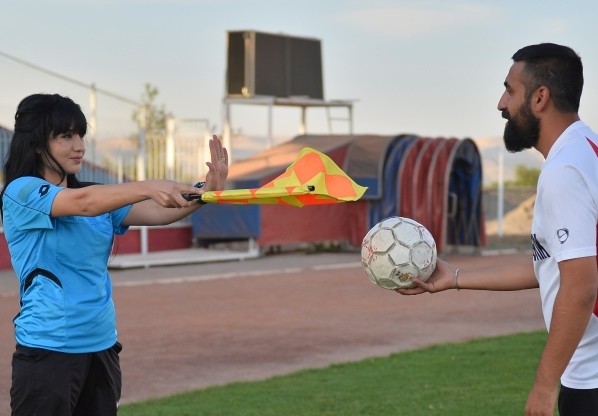 by Hakan Baş Nov 11, 2016 12:00 am
An unusual love story that began with an offside decision on a football pitch has come to a happy end, after Turkish amateur footballer Mehmet Ali Babayiğit, 28, tied the knot with Melek İmamoğlu, 25, a female referee in Turkey's southeastern province of Mardin. Talking to the Anatolian Agency (AA) Babayiğit explained how he struck love in the opponents half of the pitch. Babayiğit a footballer for 11 years said he met the love of his life on a football pitch last year during a match in the local amateur league. He was captaining his side and at one point approached the linesman to protest an offside decision. That's when he realized that the linesman was indeed a lady, the now-bride İmamoğlu.

"I immediately fell in love with her. Once I saw her, I don't know how I managed to finish the first half of the match. In the half-time, I went up to her by making up an excuse. We met and I offered her to have a cup coffee with me. She accepted and our love affair began. I'm 28 years old and it is the best decision I have ever made in my life. I proposed her and we got engaged a week after we met. We got married on June 4, 2015 at 21 Kasım Stadium in Mardin. I'm very happy," he said."We train together and can talk about football. But we never discuss the offside, because my wife knows about the offside very well. If she calls a position offside in a match, I believe her," said Babayiğit adding, "Mardin is a beautiful city and it should be brought to agenda with love and sports, not with terror."

Meanwhile, İmamoğlu who has been refereeing for three years now said she loved her husband much despite their meting under unusual circumstances.

"I had some difficulties before I went to that match. But, fortunately I did because that's where I met my husband."İmamoğlu confessed, "Our eyes locked as he came up to me to object the offside decision. After that moment, I focused on the match, but, he returned, we talked and he introduced me to his family three days later. We got engaged after a week we met. I'm very happy now."

"Every player is scared of being offside. For us, it is the other way around and it resulted in a positive. I now supervise my husband's matches but I act absolutely professionally."
RELATED TOPICS