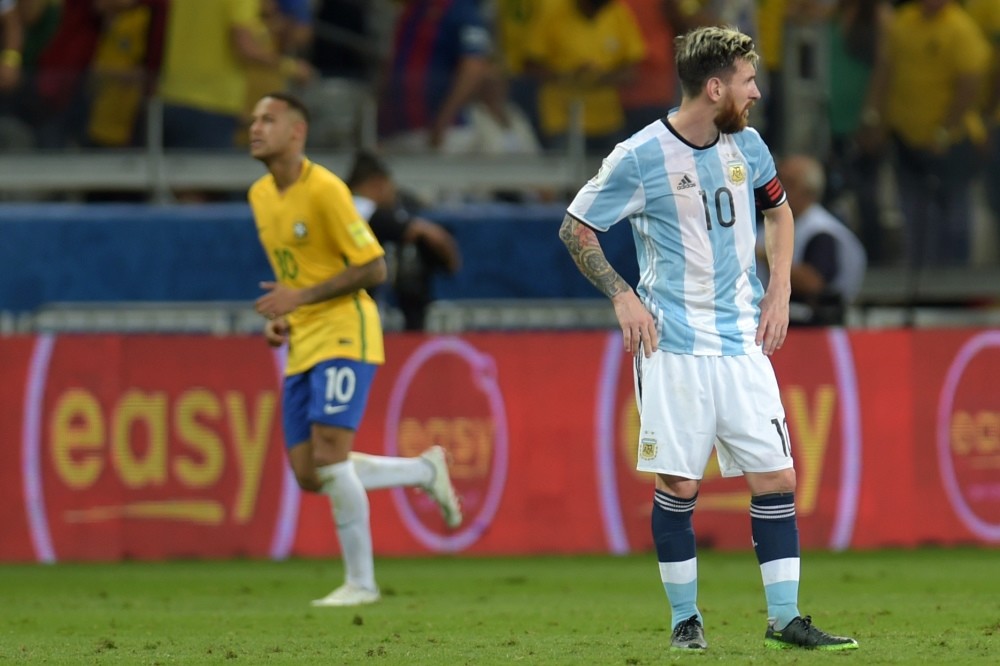 Argentinau2019s Lionel Messi stands in dejection after Brazilu2019s Neymar scored the teamu2019s second goal during their 2018 FIFA World Cup qualifier football match in Belo Horizonte.
by Associated Press Nov 12, 2016 12:00 am
Just the prospect of Lionel Messi's return gave Argentina so much confidence that one player openly said it would intimidate the Brazilians ahead of their South American World Cup qualifying match. Having the five-time player of the year back from injury didn't translate into success, though, as Messi's friend Neymar led Brazil to a convincing 3-0 victory at the Mineirao stadium on Thursday.

Neymar showed class in the lead up to Philippe Coutinho's opening goal from the edge of the box. Then the Barcelona star scored his 50th goal for Brazil at the end of the first half with an elegant touch in front of the Argentine goalkeeper. Neymar also hit the post, lobbed midfielder Lucas Biglia, easily worked his way through the opposition defense and was fouled nine times as he pushed Brazil forward.

"Look at this guy. If Neymar had played here in that game against Germany in the 2014 World Cup, we wouldn't have lost 7-1," said Eric Angelo, a Brazilian fan who watched Thursday's match and was also at his team's humiliating defeat here two years ago. "We would have more confidence and maybe given the Germans a challenge." Neymar was injured when Brazil experienced their worst defeat ever.

Messi began with a lot of style at Mineirao stadium and caused trouble for his marker, Fernandinho. In only five minutes the Manchester City midfielder was lobbied by Messi and picked a yellow card after a hard foul on the Argentine forward. But as Paulinho and Renato Augusto helped out with defending against the Argentine playmaker, the only opportunities Messi had were from free kicks near the penalty box.

Brazil coach Tite explained the strategy designed to make Messi feel so uncomfortable in his return after three games.

"We forced our way into the Argentina half more to the left so Messi wouldn't be immediately near the ball, since he was on the right," Tite said. "When he was forced to move it became better for us because that other side was already crowded."

Assessing Brazil's strengths, Tite said Neymar was great because he was playing box to box with the same quality.

"One of the biggest lies in football is that if you mark you will not have the energy to do well upfront," Tite said. "That is not the case."

Messi was disappointed with Argentina's performance, and said vast improvement was needed to get the team into one of the four automatic qualifying positions for the World Cup.

"We can't repeat what we have been doing because that won't work," he said. "We have to change a lot."

Brazil and Argentina have been in contrasting form. Brazil has won its first five games under the coaching of Tite, while Edgardo Bauza's Argentina team had draws against Venezuela and Peru and a 1-0 loss to Paraguay leading up to the loss on Thursday.

Brazil leads the South American qualifiers with 24 points from 11 matches and Argentina is sixth with 16. The top four teams qualify automatically for the World Cup in Russia in 2018. The fifth-place team advances to an intercontinental playoff. Next Tuesday Brazil visits eighth-place Peru and Argentina hosts third-place Colombia.
RELATED TOPICS