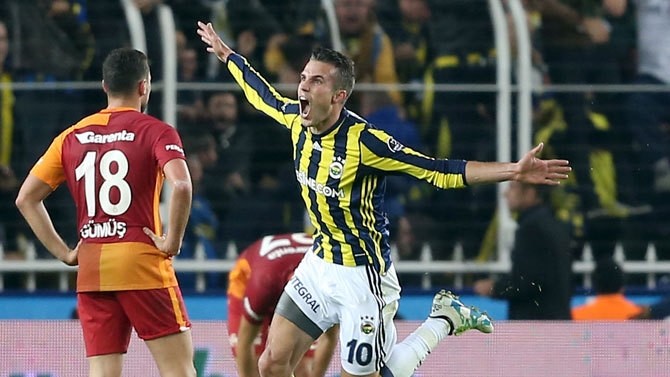 Nothing has changed in Istanbul's most exciting derby, with Galatasaray still waiting for their first win on Fenerbahçe's home turf since 1999. Robin van Persie shined with two goals, earning the nickname ‘Robin Two Persie'

Fenerbahçe bested their arch-rivals Galatasaray 2-0 in a derby match Sunday evening in the Spor Toto Super League at the Ülker Şükrü Saraçoğlu Stadium in Istanbul. There were no surprises as Galatasaray continued their streak of 17 years without a win on Fenerbahçe's home turf.

Before the match on Sunday, the Lions' biggest motivation was to break their 17-year hoodoo. They have not won any of the last 21 matches they have played at Fener's Ülker Şükrü Saraçoğlu Stadium as Galatasaray's last six presidents and nine coaches have all failed to preside over an away win against Fenerbahçe. Some Galatasaray fans even say the Fener stadium is cursed. Galatasaray won their last match against their archrivals in Kadıköy on Dec. 22, 1999. Since that day, they have drawn six matches and lost the other 15.

The Yellow Canaries took the lead in the 45th minute through Dutch forward Robin van Persie, who also found the net from the penalty spot in the 78th minute. Fenerbahçe dominated the play, with Galatasaray unable to muster a meaningful attack.

Some Fenerbahçe regulars were absent from the derby. Turkish central midfielder Mehmet Topal was suspended and Dutch winger Jeremain Lens sustained an injury in the Netherlands' friendly game against Belgium. With the win, Fenerbahçe increased their points tally to 21, while the Lions stand at 20.Since the last time Galatasaray won a game on Fenerbahçe's home turf, they have won the UEFA Cup, Super Cup, seven league titles, five Turkish Cups, and five domestic Super Cups. Neither team was defeated at home during last season's matches.

Fenerbahçe had one of their worst season starts in their history this term under manager Dick Advocaat, but the Dutchman is well versed in managing high profile derbies from his spell at Glasgow Rangers.

As the winner after Sunday's match, Advocaat said, "At the beginning of the season we could only get one point in three matches. So every match was a turning point for us. We were going to either stay five points behind Galatasaray or move one point clear of them and we have. This is a nice feeling for us. It was essential for my players' self-esteem too. We must go on like this until we catch up with leaders Medipol Başakşehir and Beşiktaş."

Mocking their arch-rivals, Fenerbahçe released a message on the club's website "We'd like to see you again."

Galatasaray coach Jan Olde Riekerink said, "We were bad as a team. We could not find any attacking positions. However, my expectations were very high before the match. We prepared for this match very well. And that was the best squad we could send on to the field. But we could not play in the way we would have liked. Maybe we felt the pressure of the 17-year winless streak. We will analyze why we lost."

The hero of the match, Robin van Persie said, "One of my biggest dreams was to score in this derby. I have played in a lot of derbies before but I have never seen such an atmosphere before. I am happy I scored a goal but the most important thing is the win. We got nearer the top of the league."

The perennial rivalry between Fenerbahçe and Galatasaray started over a century ago, on Jan. 17, 1909, with a special match that ended 2-0 in Galatasaray's favor.
RELATED TOPICS