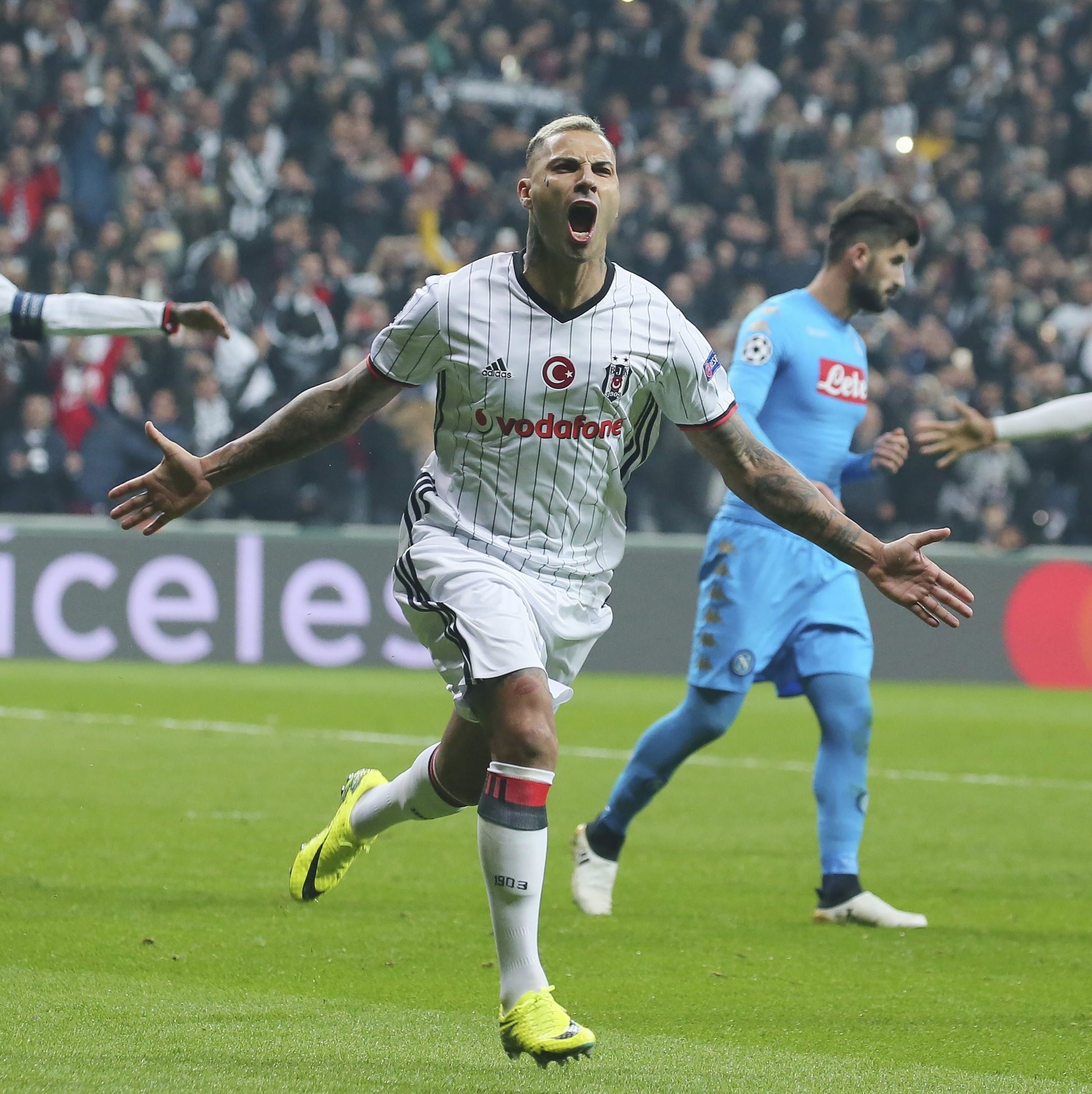 Beu015fiktau015f's Ricardo Quaresma runs to celebrate after scoring against Napoli during their Champions League group B soccer match, in Istanbul, Tuesday, Nov. 1, 2016. (AP Photo)
by Daily Sabah with AFP Nov 23, 2016 12:00 am

The Black Eagles host Group B joint-leaders Benfica Wednesday. Benfica need just three points to make it to the knockout stage. Meanwhile, a win alone will not be enough for Beşiktaş as they need Napoli to lose to confirm their ticket to the next round

Benfica, level on points with Napoli, travel to Turkey's still-unbeaten Beşiktaş, who are just a point adrift of the top pair. A Benfica victory will take the two-time champions, top in the Portuguese league, through to the knock-out phase. But, they cannot afford to be complacent against a Beşiktaş side that held them to a draw in Lisbon. The Turkish champions are looking to get out of the group stage for the first time in six attempts and their fans are sure to give Benfica a hostile reception.

Beşiktaş gave their campaign a shot in the arm with four points in their two games against Napoli, but Benfica remain better placed and a win will put them in the knockout rounds.

With seven points, the same as Napoli, the Benfica will progress with a win. A Beşiktaş victory will take them through as long as Napoli do not also win. It is a timely opportunity for the Turkish side to secure a first ever competitive home win over their Portuguese opponents.

The Black and Whites have a much better away record, as evidenced on match day one when Talisca, loaned out to Beşiktaş from Benfica in August, earned the visitors a 1-1 draw in Lisbon. That was the first time the sides had faced each other on the European stage.

In the other match of the group, Napoli might just about top the group, but they are locked in a three-way struggle with Benfica and Beşiktaş for two places in the last 16. They came from behind to see off Kiev in Ukraine in the reverse fixture and badly need three points here. Their weekend 2-1 win at Udinese kept them in touch with the top four in Serie A, though prolific striker Arkadiusz Milik is still out injured. Lorenzo Insigne grabbed a brace at Udinese and the Italians will be looking to him and Jose Callejon to fire them past Dynamo, the whipping boys of the group with just one point.

Beşiktaş had their lost their first three home fixtures against visitors from Portugal before drawing 1-1 against Sporting Clube de Portugal in last season's UEFA Europa League group stage.
On match day two, Beşiktaş were involved in another 1-1 draw when FC Dynamo Kyiv pulled level on 65 minutes to cancel out Ricardo Quaresma's free-kick in the first half.
They secured their first victory in Group B with a 3-2 win at Napoli before drawing 1-1 at the Vodafone Arena.
Back in the UEFA Champions League for the first time since 2009/10, the Turkish Super League champions are hoping to negotiate the group stage hurdle for the first time at their sixth attempt.
Adriano and Caner Erkin are a booking away from a ban.
Beşiktaş are 16 games unbeaten in the stipulated time in 2016/17 (W9 D7), though they did lose the Turkish Super Cup 3-0 on penalties to Galatasaray on Aug. 13.