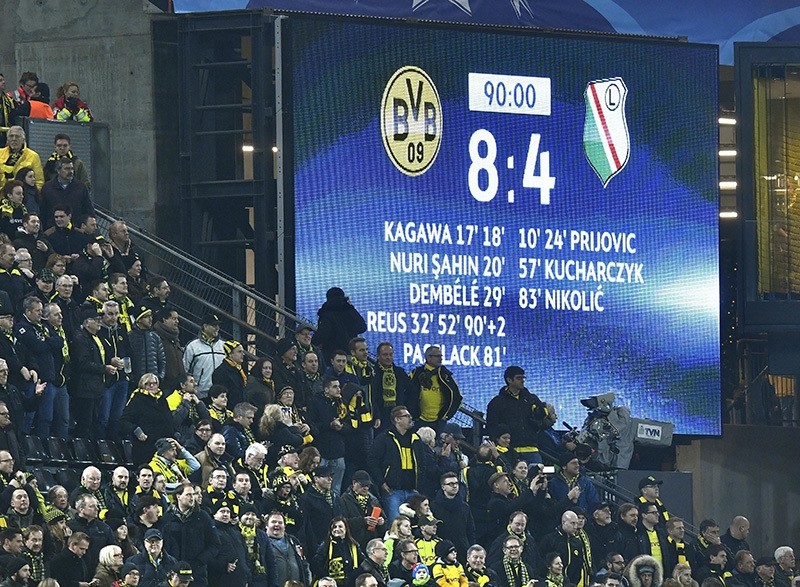 Spectators stand in front of the scoreboard during the Champions League Group F soccer match between Borussia Dortmund and Legia Warsaw in Dortmund, Germany, Nov. 22, 2016. (AP Photo)
by Associated Press Nov 23, 2016 12:00 am

Borussia Dortmund beat Legia Warsaw in a pulsating 8-4 victory on Tuesday that broke the record for goals scored in a Champions League match.

The record was set in injury time when Marco Reus, who had earlier scored twice, unleashed a shot that was deflected into the net by Legia captain Jakub Rzezniczak. The 12 goals were one more than the total when Monaco beat Deportivo La Coruna 8-3 on Nov. 5, 2003.

In the two matches against the Polish side, Dortmund scored a total of 14 goals, having won the first leg 6-0.

The winner of Group F will be decided in the final round when Dortmund visits Real Madrid. Both teams are through to the round of 16. Dortmund has 13 points and Real Madrid 11. Sporting, which lost 2-1 to Real Madrid, has three points and Legia one.

The scoring bonanza included a four-minute spell in the first half with three Dortmund goals, two of them from Kagawa.

Dortmund coach Thomas Tuchel made nine changes to the side that beat Bayern Munich over the weekend. Reus, the captain for the match, played his first game since a groin injury in May.

"That's how you imagine a comeback after a long time. I'm fine now, it's great that I could play from the start," Reus said. "But it was tough. I've been out for a long time."

Dortmund's final goal came from a pass by Pierre-Emerick Aubameyang, the club's top scorer, who came on with 20 minutes left. He did not score, although he hit the post.

Aubameyang passed across the penalty area and Reus hit a low shot that struck Rzezniczak and slipped through the legs of Legia goalkeeper Radoslaw Cierzniak.

"It's fantastic for Reus, I am really pleased," Tuchel said. "I've never had such a game, though, so I don't really know how to analyze it. We scored a clear victory, but I really don't know what to say."

Dortmund's reshuffled defense was caught out in the 10th minute, when Vadis Odjidja crossed into the area. Prijovic controlled the ball and then curled it inside the far post with the outside of his right boot.

Dortmund replied quickly. Kagawa stooped at the far post for a rare header off a cross from Ousmane Dembele in the 17th. One minute later, Kagawa and Dembele swapped passes before Kagawa drilled in with his left foot. And in the 20th, Cierzniak tried to punch out a free kick, only for the ball to hit Nuri Sahin and bounce into the net.

The action never stopped and in the 24th Prijovic got his second, shooting through the legs of a defender. Prijovic nearly had a hat trick, but hit the crossbar from point-blank range.

The ball soon ended up in Dortmund's possession and Sahin fed Reus, who set up Dembele. Dembele fooled two defenders before shooting under Cierzniak in the 29th. Reus then completed the seven-goal scoring fest in the first half by tapping in a low cross from Kagawa.

Reus got his second in the 52nd, again from close range from a Dembele pass, to make it 6-2.

Michal Kucharczyk pulled one back for Legia, before Felix Passlack scored after a great run by Christian Pulisic, who crossed for Andre Schuerrle. His shot was blocked, but Passlack headed the rebound into the net.

A small group of Legia supporters made it into the stadium although UEFA had imposed a ban after Polish fans had created disturbances in the match at Real Madrid.