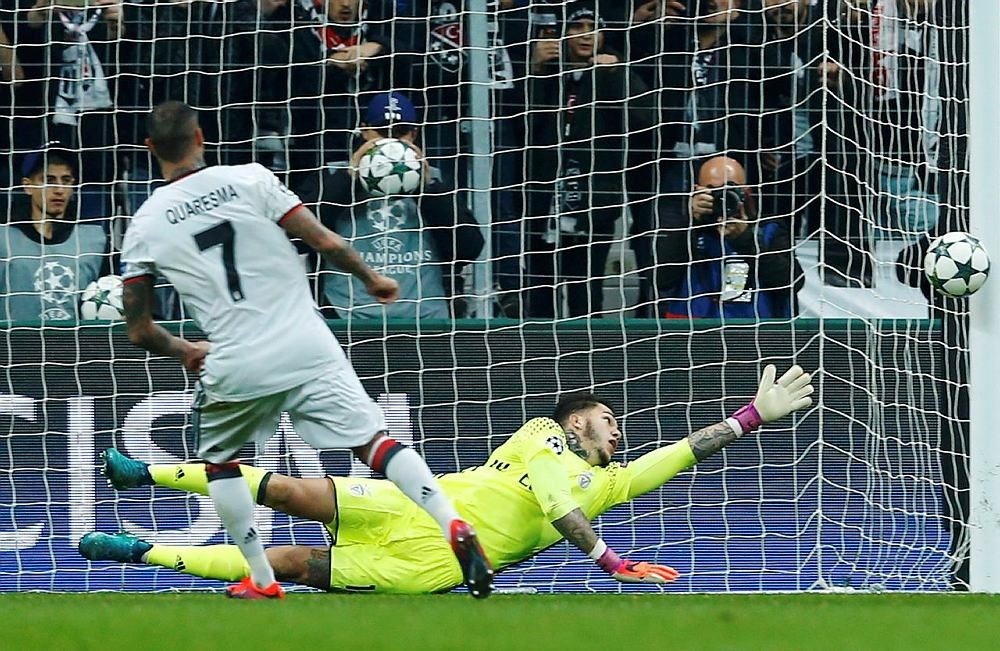 Beşiktaş stunned Portuguese side Benfica in Istanbul on Wednesday night by hitting back from three goals down in the first half and ending their Champions League game with a 3-3 draw while some 42,000 fans broke the record for the biggest silent cheer

It was apparently only its fans that had faith in Beşiktaş's accomplishment as the Black Eagles surprised soccer pundits with a 3-3 draw against Portugal's Benfica on Wednesday night. The UEFA Champions League game in Istanbul was the scene of a stunning comeback by Beşiktaş despite conceding three goals in the first half. For fans whose mood was a bit grim despite their unyielding support for the team, the first half was also the time they attempted to break the record for largest silence as some 42,000 fans used sign language to achieve this and raise awareness against racism and for the deaf.

The Group B match at the Vodafone Arena saw Beşiktaş come back from three down at halftime to even the score 3-3, earning a crucial point to keep their hopes alive.

Goncalo Guedes was the first to dash Black Eagles' hope for an easy win at home when the 19-year-old scored Benfica's first goal in the 10th minute. Nelson Semedo followed it some 15 minutes later. In the 31st minute, Benfica already had three goals against the home team after Ljubomir Fejsa scored the third.

Starting the second half full of motivation and determination, the Black Eagles found their first goal in the 58th minute from striker Cenk Tosun's magnificent volley.

The 25-year-old's goal lifted the crowd and the team from that moment on.

Beşiktaş were awarded a penalty kick in the 83rd minute. Portuguese star Ricardo Quaresma made no mistake from the penalty spot to make the score 3-2.

Vincent Aboubakar, who was loaned from Portuguese powerhouse Porto at the beginning of the season, completed the comeback in the 89th minute to send home fans into ecstasy. Portuguese export Quaresma helped the third goal too, with a stunning rabona kick sending the ball to the direction of Aboubakar.

With the result, Beşiktaş remain in contention in the group, increasing their points total to seven. The team is still yet to lose in all competitions this season, extending their unbeaten streak to 16 matches.

After the final whistle, man of the match Cenk Tosun was jubilant: "There's nothing like that feeling, I can't even explain it," he told broadcasters.

"I think you could tell it from my face, maybe someone has taken [a photo of] that moment; it was incredible," Tosun said. "I believed even at 3-3 that we could find the fourth goal. Maybe if we had scored the third goal earlier that would have happened, but we are very happy that we remained in the competition."

Quaresma credited the comeback with enthusiastic fans. Speaking to the Portuguese media after the match, he was apologetic for the first half, for "drowsy" performance of the team against "a strong rival like Benfica." He said the fans' upbeat mood fuelled their offensive and made them realize they still had a chance to reverse their fortune after Cenk Tosun's goal.

Although he called 3-3 draw "a positive step," Beşiktaş coach Şenol Güneş admitted it was still not a good score and admitted the Eagles "started out badly." "We couldn't attack, nor we could defend. The team was nowhere to be seen in the first half and I felt like it wouldn't matter how many players I replace," he said in a post-match press conference. He said that the team could score a fourth goal if it pressed more against Benfica.

The comeback brought back memories of the 2005 Champions League final in Istanbul, when Liverpool managed to come back from a 0-3 deficit at half time against AC Milan to draw 3-3 and win the cup after a penalty shootout.

In the other match in Group B, Napoli drew 0-0 against Ukraine's Dinamo Kiev, missing out their chance to top the group and qualify to last 16.