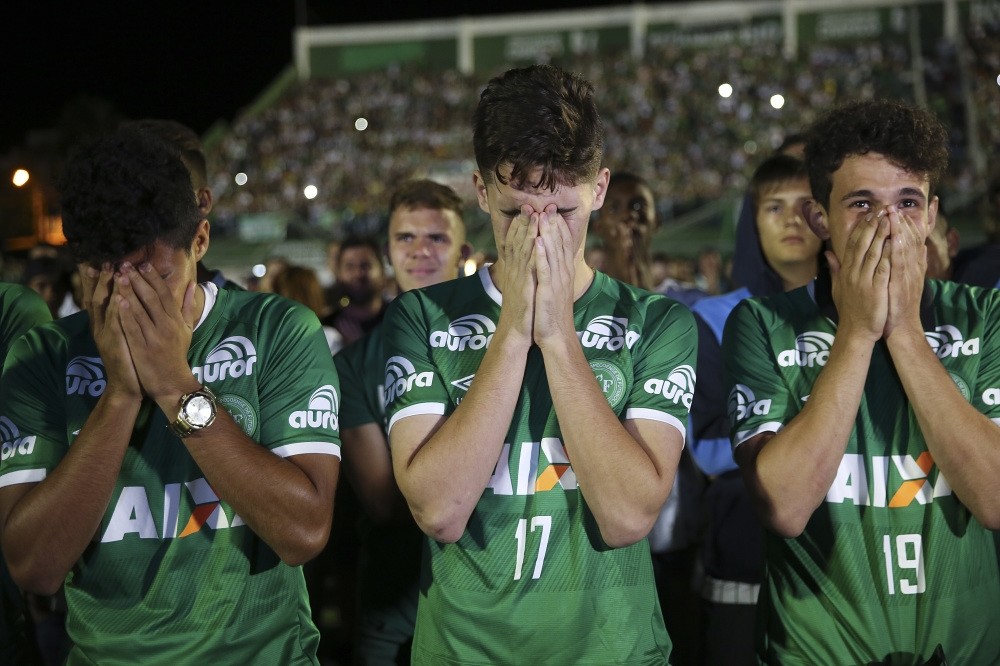 Players of Chapecoense football club participate in a tribute to their fellow players killed in a plane crash at the club's stadium in Chapeco, Santa Catarina, Brazil.
by Dec 02, 2016 12:00 am

As Brazilian club Chapecoense look to rebuild from the devastating effects of the air crash that decimated their squad, they can draw hope from the tale of how Manchester United forged an alliance with Real Madrid to recover from a similar disaster

The fatal crash on Monday in Colombia that killed all but three of Chapecoense's team as they flew to the final of the Sudamericana Cup evoked memories of the 1958 Munich air disaster in which eight Manchester United players died. The Munich crash extinguished a generation of young talent at United and ended dreams of a third straight English title, but the club managed to return to the peak of European football, thanks in part to a lifeline from Real Madrid.

Madrid, then European champions, offered their facilities to players and staff recuperating from the accident and raised money, both by selling a special pennant and playing a series of friendlies in England and Spain. They also offered United their two leading players, Argentine forward Alfredo di Stefano and Hungarian striker Ferenc Puskas, on loan for the last three months of the season - an offer echoed this week by Brazilian first division teams, who volunteered to lend players to Chapecoense. Although Di Stefano and Puskas agreed to swap Madrid for Manchester, the offer was blocked by the English Football Association.

"The help from Real Madrid was a massive boost. United were finished: they were ready to shut their doors at one stage," Ludden said. "Such generosity of spirit kept United going."

Chapecoense have also received a huge outpouring of sympathy following the crash as they flew to Medellin to face local side Atletico Nacional in the Sudamericana Cup final. Teams from around the world - including Manchester United and Real Madrid - sent condolences and turned their stadiums, websites and badges green in tribute to the small side from southern Brazil.

Torino, the Italian club who lost all their players in an air crash in 1949, expressed interest in a money-raising friendly, the Corriere dello Sport reported on Wednesday. Assistance will be vital for Chapecoense, a small club with nothing like the resources of Manchester United or Real Madrid. They reached the first division for the first time in decades in 2014 and just managing to stay there was a considerable feat. Beating teams such as Argentina's Independiente and San Lorenzo on the way to the Copa Sudamericana Final were major upsets. Chapecoense's rivals in Brazil have offered players on loan and asked the Brazilian Football Confederation (CBF) to exempt them from relegation for the next three years. But the CBF has not yet responded to the idea and there are doubts about the practicalities of such deals. Ludden said rival clubs in England offered players to Manchester after the Munich disaster but they were reserves and not what the club needed. Exempting Chapecoense from relegation could also open the way to potential legal challenges, a regular occurrence in Brazilian football.

Ludden said, however, that the outpouring of grief and solidarity with Chapecoense - including Atletico proposing that the Sudamericana title be awarded to the stricken Brazilian club - evoked the mood after Munich and boded well for the club's future. Other clubs in Brazil's top league are offering to loan players to Chapecoense, with a proposal that the modest club in deep southern Brazil is guaranteed to stay in the top division for the next three years.

"The club will rebuild, I am sure," said Walter Feldman, secretary general of the Brazilian Football Confederation. "Eight clubs have already called me to offer concrete, material solidarity. We are studying ways to best help."