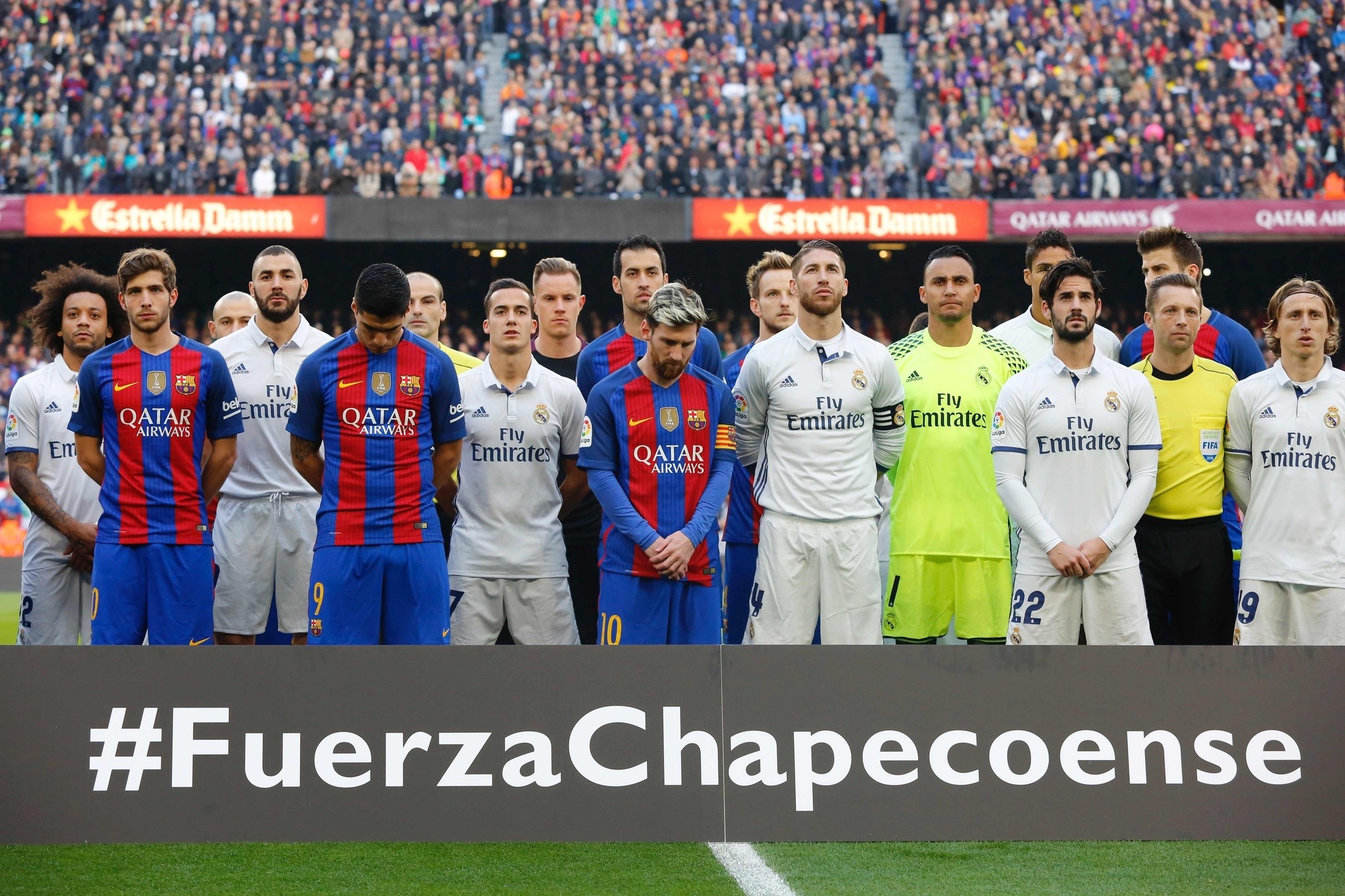 Barcelona and Real Madrid players observe a minute of silence to remember the air crash victims of the Chapecoense football team before the Spanish league football match FC Barcelona vs Real Madrid CF. (AFP Photo)
by Associated Press Dec 03, 2016 12:00 am

Sergio Ramos scored in the 90th minute to secure Real Madrid a 1-1 draw at Barcelona in Saturday's "clasico" match at Camp Nou.

Ramos charged in to head Luka Modric's free kick past goalkeeper Marc-Andre ter Stegen, who got a hand on the ball but couldn't keep it out.

Luis Suarez's header from a free kick by Neymar had given Barcelona the lead in the 53rd.

The stalemate favored Zinedine Zidane's Madrid, which left Camp Nou with its six-point advantage atop the table intact with Barcelona second.

Central defender Ramos has a habit of striking late for Madrid, including his headed goal to force added time in the 2014 Champions League final, which Madrid went on to win against Atletico Madrid.

His goal on Saturday stunned Barcelona, which was on the cusp of reviving its title defense.

Instead, it has now drawn three rounds in a row and only won two of its last seven matches overall, a particularly poor run for a side boasting an attack of Lionel Messi, Neymar and Suarez.

Despite having Andres Iniesta cleared to play from a right-knee injury hours before the match, Barcelona coach Luis Enrique decided to keep faith in the same starting 11 that was thoroughly outplayed in last weekend's stumble at Real Sociedad. Andre Gomes started for Iniesta.

Madrid's defense controlled a no-frills first half, stopping Barcelona from turning its superior possession into danger for goalkeeper Keylor Navas, while creating the only scoring opportunities.

Forward Lucas Vazquez, playing for the injured Gareth Bale, was behind Madrid's first threat when his fancy footwork opened space for a cross that Karim Benzema fired off a defender.

With Modric getting plenty of help to keep Messi in check when he tried to go through Madrid's midfield, the visitors ventured out for a goal in the final minutes before halftime.

Cristiano Ronaldo tested Ter Stegen with a pair of strikes before Benzema's pass intended for Ronaldo forced Gerard Pique to intervene with a well-timed clearance in the 44th.

Barcelona got the boost it needed after the restart.

Suarez muscled Vazquez out of the way and nodded in Neymar's cross that he swerved into the middle of the six-yard box.

Iniesta went on for Ivan Rakitic in the 60th for his first action since injuring a ligament in his right knee at Valencia on Oct. 22.

Neymar, who picked up a suspension with a fifth yellow card, impressed with a sudden change of foot to breeze past Dani Carvajal, only to blast his point-blank shot over the bar in the 68th.

Iniesta, Neymar and Messi all added shots that could have sealed the win.

But Madrid pinned the hosts back in the final minutes and got the equalizer when Ramos arrived unchecked to meet Modric's service.

Before kickoff, both teams observed a minute of silence held for the victims of the plane crash in Colombia which included players from the Brazilian team Chapecoense.