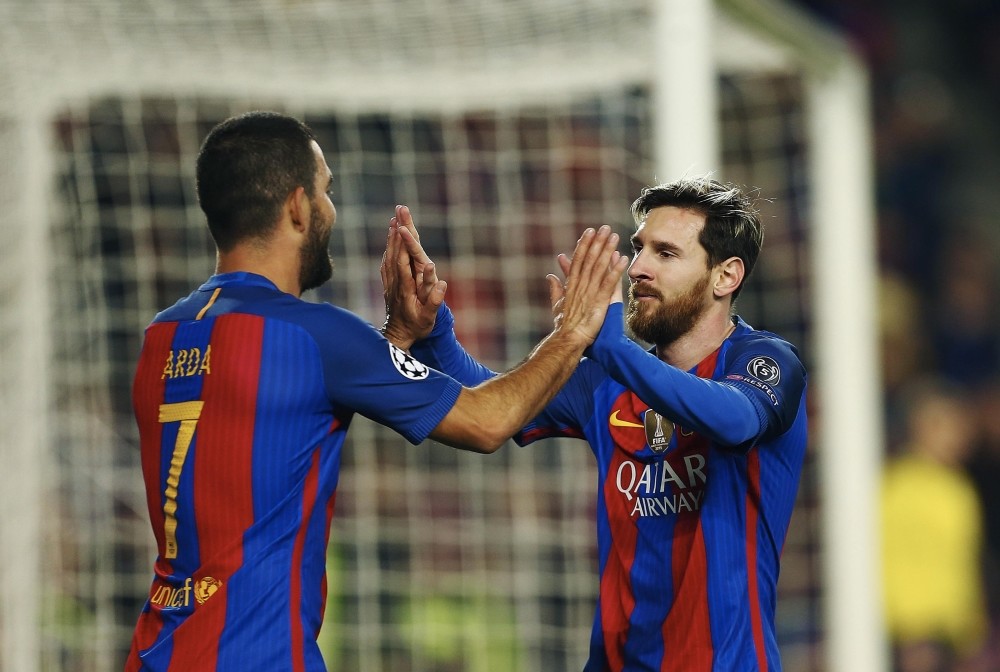 Barcelonau2019s Argentinian striker Lionel Messi (R) celebrates his goal against Borussia Monchengladbach with teammate Arda Turan.
by Dec 15, 2016 12:00 am
La Liga is targeting a global television audience of 3 billion people by the end of next season, a senior league official told a football conference in Qatar yesterday. That would represent more than double the number of fans who tuned in worldwide for matches in Spain's top league last season, said Vicente Casado, La Liga managing director of international development. Casado explained that the desire to build up worldwide audiences was behind La Liga changing kick-off times for Real Madrid and Barcelona matches.

"This is one of the big reasons," he said.

One of the big two Spanish sides plays every week at 4:15 p.m. local time on a Saturday, which by traditional Spanish cultural standards is an unconventional time to stage a football match. The move is designed to maximize Asian TV viewers and go head-to-head with the Premier League's traditional 3 p.m. kick-offs. In the 2015/2016 season, 1.2 billion fans globally watched La Liga games on TV, said Casado. The current season should see that figure jump to 2.1 billion, as La Liga competes with rivals such as the English Premier League (EPL) to try and secure the largest share of the global television audience. The three billion figure would match the figure for the number of people tuning in globally for English games, according to the EPL website. Casado added that more than 13,000 people turned out at one site in New Delhi, India, at the weekend to watch Barcelona play Real Madrid in La Liga's top clash, El Clasico.
Last Update: Dec 15, 2016 1:40 am
RELATED TOPICS