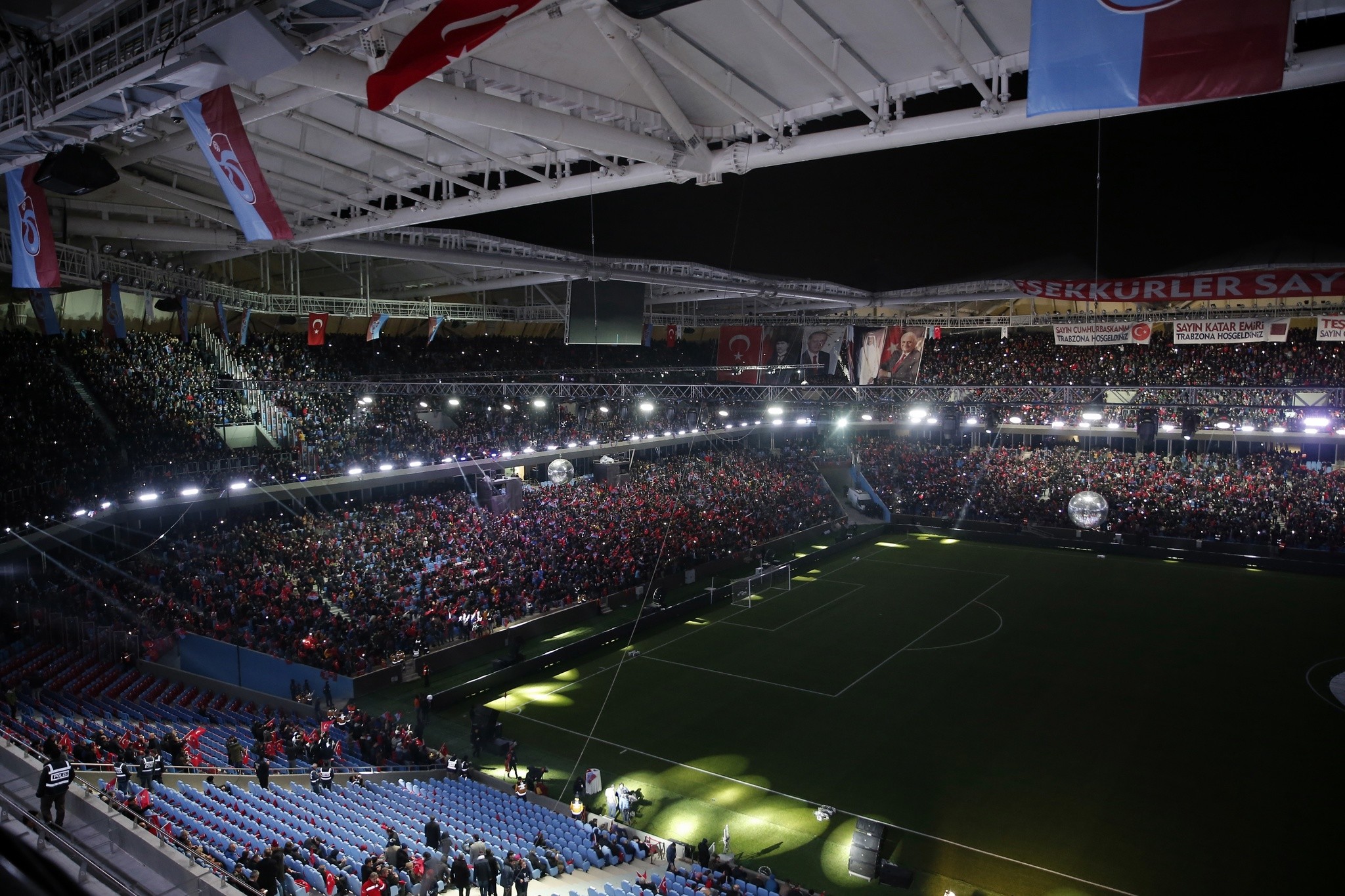 The Black Sea Storm have finally opened their new Akyazı Stadium, which is on an artificially created island near the Black Sea and one of the most modern stadiums in the world. President Erdoğan opened the new stadium with Qatar Emir Sheikh Tamim bin Hamad Al Thani in a spectacular ceremony

The series of new stadiums built in Turkey continues with another new football arena opening in Turkey's Black Sea province of Trabzon. After new stadiums for Galatasaray, Bursaspor, and Beşiktaş, it is now Trabzonspor who are enjoying a brand-new stadium. Akyazı Stadium, which has replaced the former Hüseyin Avni Aker Stadium, was opened with a grandiose ceremony on Sunday with President Recep Tayyip Erdoğan and Qatar Emir Sheikh Tamim bin Hamad Al Thani, state officials, former politicians, sports celebrities, players and coaches in attendance.

The Beşiktaş administration and coach Şenol Güneş also attended the opening ceremony. Trazbzon's local press alleged that the new stadium complex would be named after Şenol Güneş who is a former goalkeeper and coach of Trabzonspor and was born in Trabzon. The construction of the new Akyazı Stadı began in 2013, on an artificially created island near the Black Sea in the Akyazı district, west of the city of Trabzon.

The stadium has a capacity of 42,000 spectators. The unusual roof, resembling quills, is crucial as the stadium is located on the sea shore. It should protect the spectators not only from the sun and rain but also from the wind. The location was selected carefully. The stadium is part of a large complex of sports and leisure facilities.

The arena, distinguished by the unusual roof, was designed by German architecture firm ASP Architekten, who also created the design of the Galatasaray Türk Telekom Arena. The new Akyazı Stadium will have a capacity of 42,000 seats, including 3,000 VIP seats and a 122 sky boxes. The estimated cost of the new Trabzonspor stadium construction was TL 230 million ($65 million).

The old Hüseyin Aker stadium, which had a running track, did not fulfil modern criteria any longer despite the recent renovations done between 2005 and 2010. Nevertheless, the 65-year-old stadium, built in 1951, had been through a lot and the Trabzonspor team and fans deserve to have a better stadium with better facilities.

The official groundbreaking took place on Nov. 24, 2013. However, preparatory work started in 2011, when works on covering sea water with land began. Piling and foundation works started in mid-2011, before the groundbreaking. Overall the stadium is ready in three years.

Ergün Turan, president of the Housing Development Administration of Turkey (TOKİ), said "It will be the apple of Turkey's eye. The Akyazı Stadium breaks grounds by many features it has. It is quite an important work for Turkey's engineering life. We are not only building a stadium, but also quite a beautiful work in terms of architecture. Thus, we are constructing a beautiful stadium both for Trabzonspor and our country.

"Akyazı Sport Complex is among the most modern facilities of Europe" Turan said. "Our complex includes 2 artificial and 5 natural grass pitches. Moreover, it also has a camp training center and 1 Provincial Center of Youth and Sports."